How one iPhone 5 user reacted to the Galaxy Note 2

It’s always interesting to hear about folks’ experiences when migrating from one platform to another. It’s a tough transition to make when considering the vast differences in the ecosystems, the way the devices work, and having to start anew on a platform that is far from anything you’ve used.

I personally tried to halfway migrate to iOS by getting an iPad, justifying the move with the lack of native tablet apps for Android. It was a fine device, but I’d only lasted about 5 months before crawling back to Android — no amount of apps in the world could replace the powerful multitasking and customization features Android has to offer, and that’s before even thinking about custom ROMs. 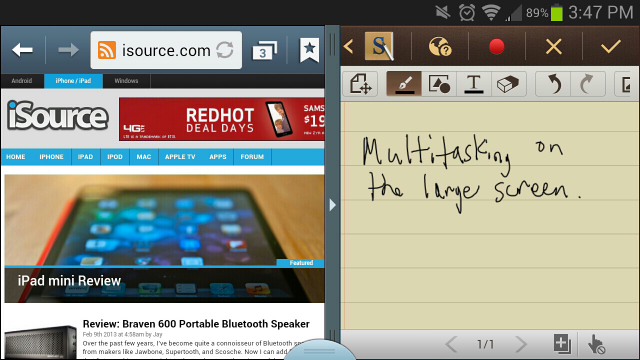 That’s why I was fascinated by this article over at sister site iSource.com. Brad — an iPhone 5 user — was enticed by the unique features and powerful hardware of the Samsung Galaxy Note 2, and decided to give it a real spin. It’s an interesting switch as the devices are polar opposites: one prides itself on being bigger, while the other prides itself on being smaller. Android with TouchWiz, despite what Apple might have you think, is a much different experience than iOS 5.

I could go on and on, but you already know the deal. He talks about his two-week experience with the device, giving us his impressions on whether or not the bigger display is all it’s cracked up to be, Samsung’s unique multi-tasking features with multi-view and S Pen, and more.

I won’t spoil it for you so you’ll just have to get on over to iSource to read it for yourself. After doing that, why not swing back here and let us know about a time you tried to jump from one platform to another. We’ve all thought about it before, and continue to do so as new platforms are introduced and old ones evolve. Don’t be ashamed!