ASTRO File Manager for Android has been a force ever since the operating system’s launch back in 2008, and the application is getting even better today. Today’s update adds Facebook Photo integration, functionality which allows you to view and download your Facebook photos directly within ASTRO’s user interface. 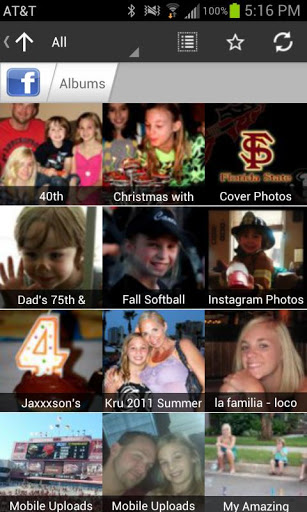 That’s not all, though. Those on the older Froyo, Gingerbread and Honeycomb versions of Android will finally be stepped up to the stylish interface that ASTRO v4 brings, though Holo UI elements won’t be emulated for the former two here. It goes deeper than aesthetics for those users, too, as SkyDrive, Google Drive and DropBox support have all come to these users, as well.

The ASTRO v4 interface also includes an intuitive side-sliding control scheme to bring up more options. For instance, sliding to the left will bring up tools (including App Backup, Task Killer and SD card usage), settings and help, while sliding to the right will allow users to access cloud services, network locations and saved searches.

ASTRO reminds us that its user-base sits at 40 million, and that it has reached another milestone today with over “1 billion sessions.” We’ve asked for clarification on what a session is, but in the meantime we’re assuming it either means how many times the app is opened or how many times you use one of the app’s connected features.

Regardless, 1 billion of anything is a big number and there aren’t many who can achieve the same success Metago has with ASTRO. We’re told to expect even more great updates very soon so stay tuned as we’ll bring you the skinny on that whenever Metago is ready. The new version of the file manager is available for free through the Google Play Store, and remember that you can also get several great add-ons at cost  so be sure to check those out. Read on for full press details.

New ASTRO release rolls out to user base of 40 Million downloads and adds Facebook photos
alongside Google Drive, Dropbox and SkyDrive.

ASTRO is a powerful mobile application that acts as a network file system, not only managing
files on device, but network and cloud storage locations as well. This release includes its
latest integration with Facebook, allowing users to easily view and copy pictures from their
Facebook photo albums. For Froyo, Gingerbread and Honeycomb users, this update brings the
new ASTRO v4 interface, which is more intuitive, faster, has side screens for quick access to
almost anything in the app and includes integration with Google Drive, Dropbox and Microsoft
SkyDrive.

“This release is significant to Metago and our user base of over 40 million,” says Kevin Payne,
chief executive officer at Metago. “Integration with Facebook to make viewing, downloading
and sharing pictures via ASTRO easy and social is a powerful new feature. And, as a Digital
Lifestyle Management™ company, we will continue to enhance Facebook and all of our other
cloud integrations with exciting new features, making ASTRO easier to use and more socially
interactive.”

To find out more information regarding Metago, or to download ASTRO File Manager, you can
visit us online at http://www.metago.net or follow us at http://www.twitter.com/metagoinc or
http://www.facebook.com/ASTROfilemanager.

About Metago
Metago is a leading mobile device application firm headquartered in the Atlanta, Georgia metro
area. The Company sells Digital Lifestyle Management™ applications for organizing, managing
and sharing files and content whether on their mobile devices, cloud services or PCs. For more
information on Metago, visit us online at www.metago.net.