Lenovo Duet 3 review: the Chrome tablet everyone should own

It’s surprising to think that a few years back, many of us were still questioning the viability of Google’s Chrome OS platform. These days,  Chromebooks are everywhere! Most of them are dirt cheap, intended to be iPad alternatives for education, but there are also plenty of Chromebooks being used for business and personal use since they are simple, long-lasting alternatives to cheap or even mid-range Windows laptops.

The new Lenovo Duet 3 falls into the category, with the exception that it’s really a Chrome Tablet that ships with a detachable keyboard and stand. Think of it as Lenovo’s take on the Surface Go, running Chrome OS rather than Windows.

As the official successor to the original Duet which made its debut in 2020, the Duet 3 is larger and more powerful. But that also comes with a bump up in price from $279 to $369. Let’s find out if the high price is worth the upgrade. 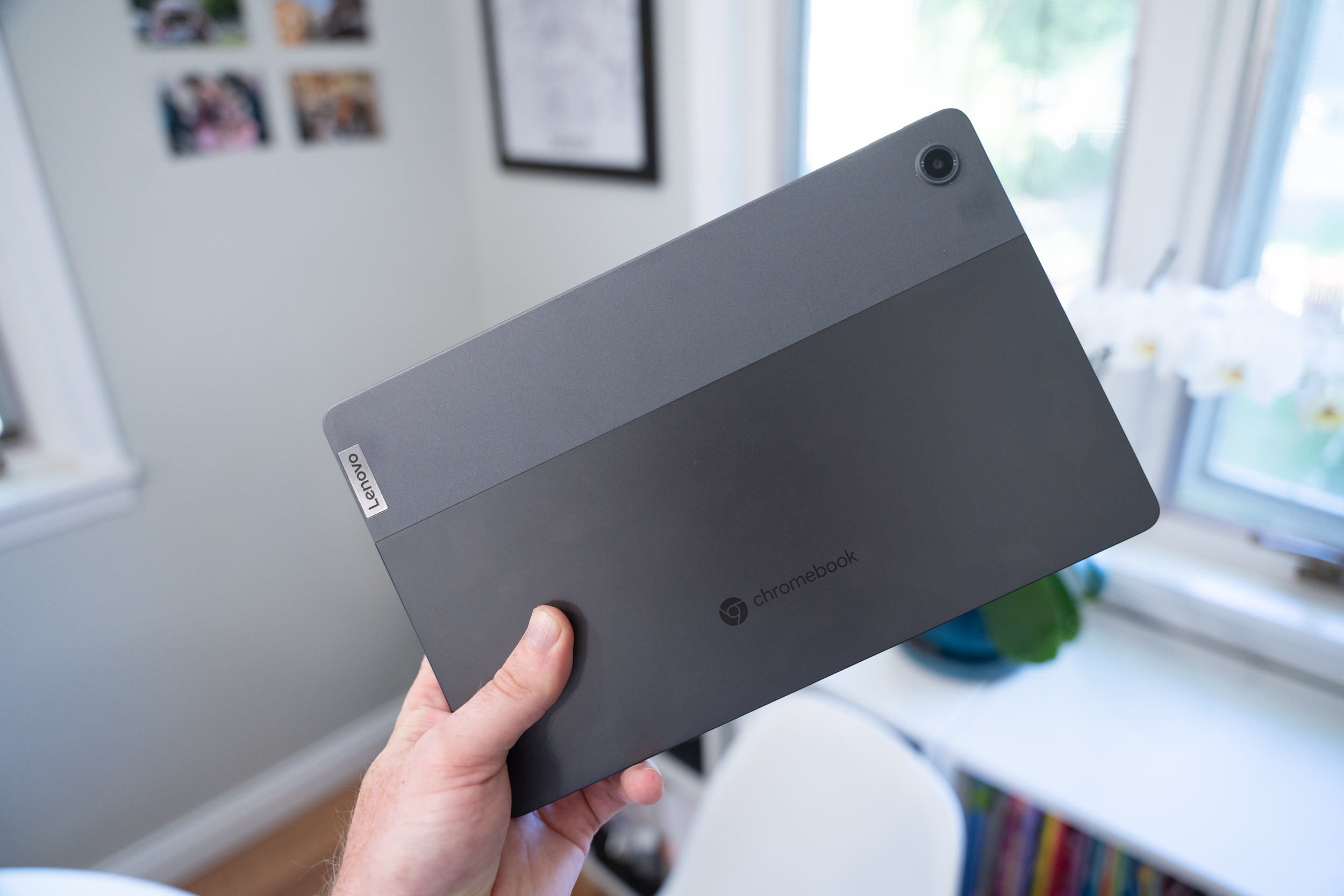 The look and feel of the Lenovo Duet 3 are nearly identical to the original with its two-tone plastic and metal finish on the back. I did prefer the original blue color option since it was a bit more playful, but the new gray color works just fine as well and most people won’t be seeing that often if they use the magnet cover/stand that comes included with the tablet.

When folding the tablet in portrait orientation, the power button is a bit awkward to reach since it’s on the top edge, but it’s perfectly fine in landscape mode.

One feature a love about the design is that Lenovo has equipped the tablet with two USB-C ports, one on each side of the device. This allows you to easily plug it to charge, but it also gives you the opportunity to plug in any peripherals you might have as well. 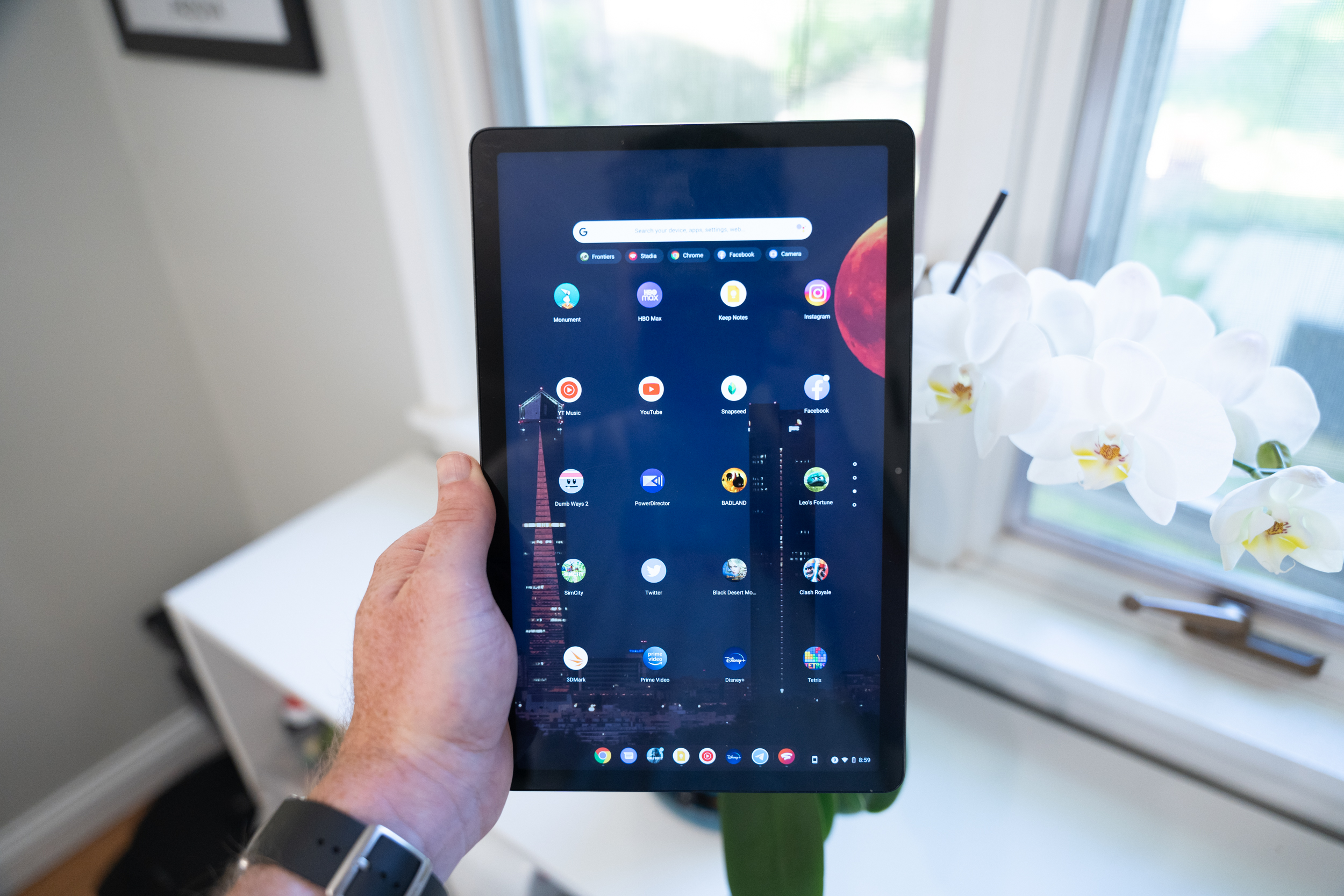 At 1.14lbs, the Duet 3 isn’t excessively heavy, but that number nearly doubles when the back cover and keyboard are attached. I do like that they are included with the price of the tablet, but they do make the overall experience a bit more bulky and a lot more cumbersome when compared to a true Chromebook laptop. That being said, the Duet 3 is by far the most versatile Chrome OS device on the market at this price point, making it quite compelling. 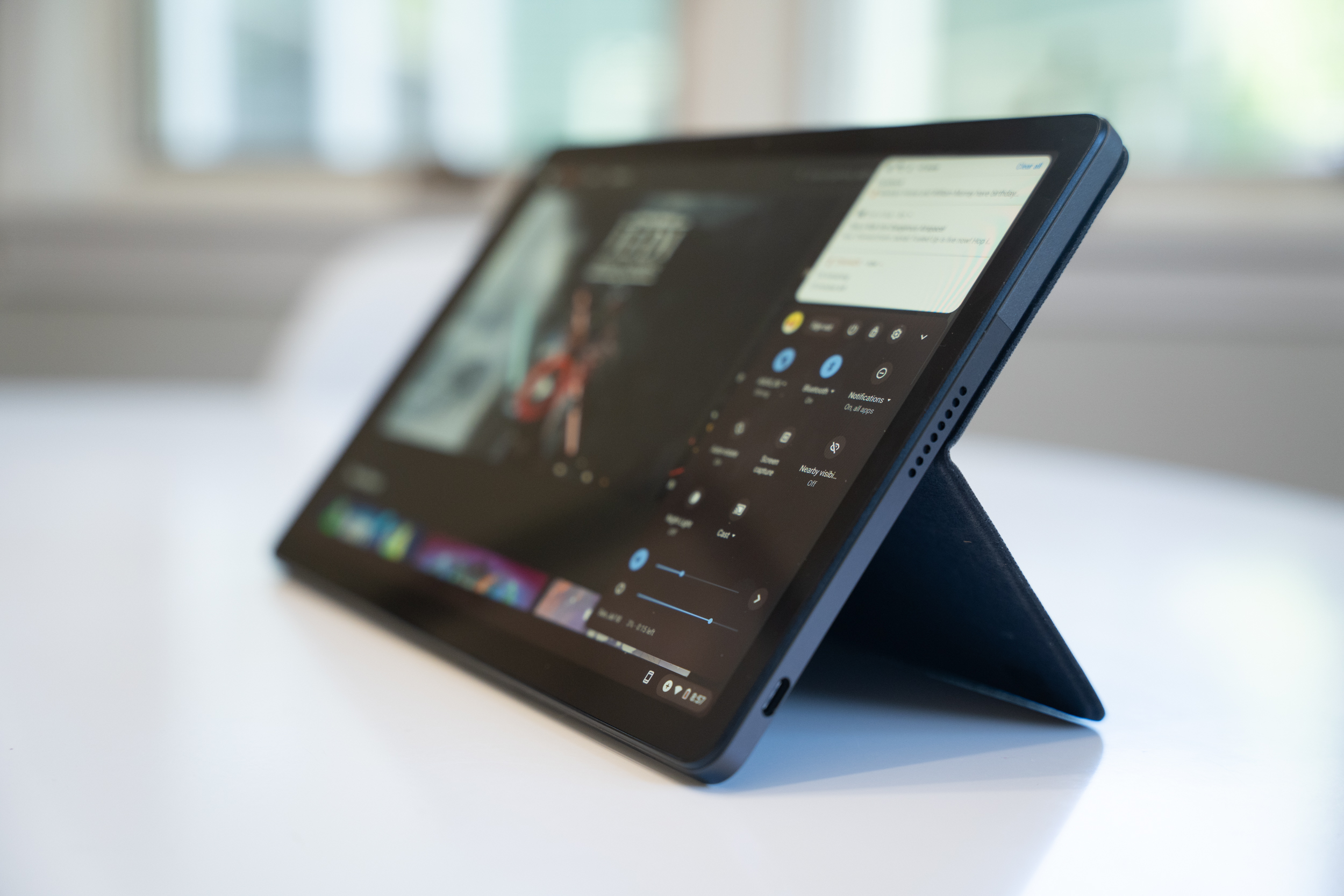 The 10.9″ 2K (2000 x 1200) display sports a 16:10 aspect ratio, making it a little easier to use as a mini-laptop than some of the other tablets in the category with their 16:9 displays. Having a display this large on a tablet can feel a bit overwhelming if you’re not used to it, but the added screen real state helps dramatically if you’re going to be using the Duet 3 mainly as a laptop replacement since it allowed Lenovo to expand the footprint of the keyboard quite a bit.

The display itself is crisp, delivering great colors and viewing angles. I have no complaints but its limited 400 nits of peak brightness don’t do the tablet any favors when using it outdoors. You’ll be fine on an overcast day, but the display is a bit hard to see if the sun is out.

While you don’t get front-facing speakers on this tablet, the side-mounted stereo speakers are fairly loud and offer some decent separation for stereo audio. That being said, the audio quality is lacking, with music sounding a bit hallow with a complete lack of bass. While Pixel 6 Pro isn’t quite as loud, the audio experience it provides is definitely a lock richer.

This brings up another somewhat minor issue with the Duet 3, the fact that it doesn’t have a 3.5mm headphone jack. If you want to use wired headphones, you’ll need a USB-C to 3.5mm adaptor, but I recommend using a good pair or Bluetooth headphones or earbuds. 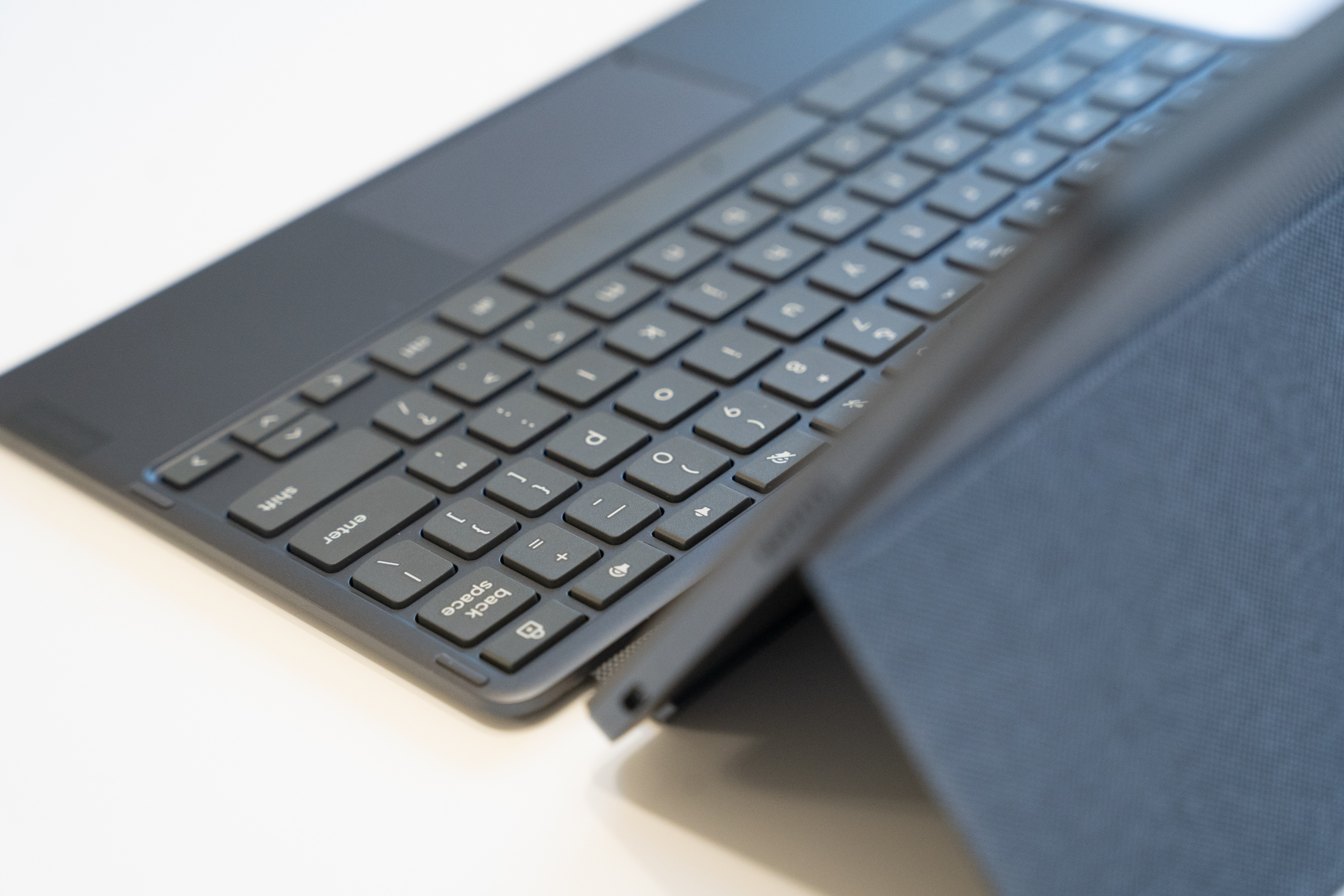 Like its predecessor, the Duet 3 comes with a keyboard cover and a removable back panel that doubles as a stand. As mentioned already, the larger display of the tablet, provides some extra room for the keyboard as well, which is a big improvement with better spacing for the keys, making it more comfortable to type on. Lenovo’s also delivered a more tactile feel and an incredible amount of travel for the key, considering how thin the keyboard cover is.

I’ve been using the Lenovo Duet 3 for about a week and I can say that most people will be quite happy with the keyboard for typing, but I do recommend bringing along your own Bluetooth mouse since the trackpad can definitely feel a bit cramped. Chrome’s gestures work just fine and I haven’t run into any issues with the trackpad itself. It’s just a lot smaller than I’d like, which forced me to reply on using the touch screen a lot more. 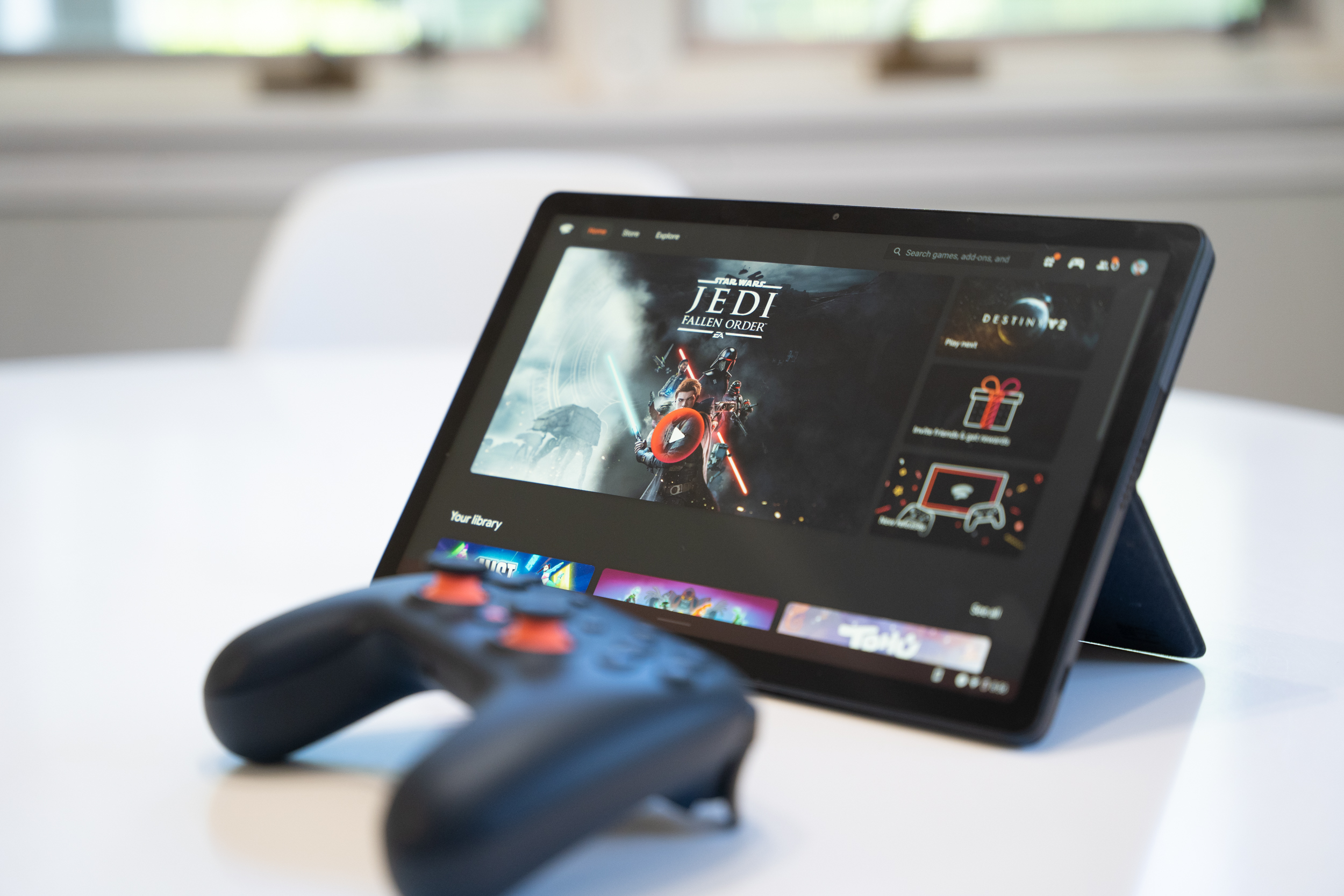 Powered by a Snapdragon 7c Gen 2 chipset, the Due 3 isn’t going to be the best Chrome tablet on the market for playing games, but it can still handle itself nicely when playing call of Duty Mobile if you’re not planning to max out the graphics settings. It also works great for streaming Stadia games (try Stadia and get two FREE months of Stadia Pro)  as well, but I do recommend sticking to casual games for the best experience possible.

When compared to the MediaTek Helio P60T chipset inside the original Lenovo Duet, you can definitely feel the difference in performance. The overall system is a lot smoother with apps loading quicker and fewer slowdowns when you have more than a dozen tabs open at once in Chrome.

The Lenovo Duet 3 may not be the perfect gaming tablet, but it performs incredibly well when it comes to browsing the web, watching movies, word processing and a whole lot more. If gaming isn’t something you do on a regular basis, this tablet is perfect for getting work done or even for a long school day since the battery can last roughly 10-11 hours under regular use. That’s a bit less than the 12 hours we saw from the original Duet, but that’s to be expected since the chipset is more powerful and the display is larger as well. 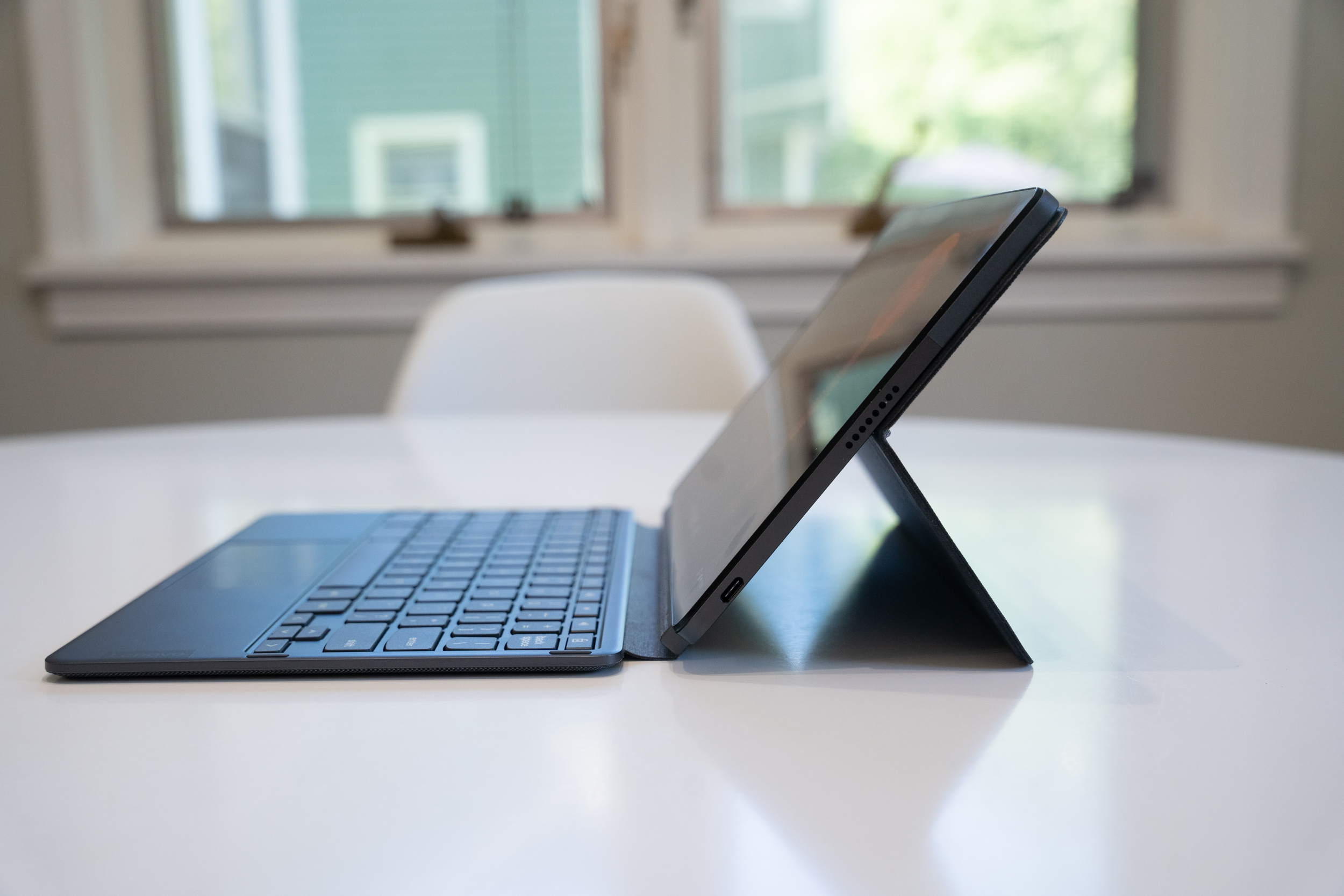 If you’re looking to buy a new Chrome OS tablet, the Lenovo Duet 3 should be at the top of your list. It’s not going to wow you with its performance, but Lenovo’s gotten all the basics right while also giving the tablet an incredibly compelling price.