Amazfit T-Rex Pro Review: Rugged and worth every penny

Smartwatches are a dime-a-dozen nowadays, and while we are still awaiting more solid and updated Wear OS smartwatches, other companies continue to release products aimed at different markets. The Fitbits and Samsung’s of the world provide an end-to-end experience that is actually quite good, but those offerings don’t always meet the needs of the users. This is where we have been seeing company’s like Amazfit pick up the slack, even without using a fully functional wearable operating system like the others.

The Amazfit T-Rex Pro is the latest offering from the company, and is, as the name suggests, the successor to the Amazfit T-Rex that was released last year. At first glance, you would have a hard time telling the two options apart, save for the different color options available for each model and the difference in pricing. In our review of the Amazfit T-Rex, we said the following:

Our best smartwatches will likely have options that are more suitable, but if you are looking for an excellent smartphone companion that’s mainly focused on fitness tracking, the Amazfit T-Rex is a fantastic choice.

Bringing us to the T-Rex Pro, this is quite a billing to live up to, especially when you consider the $40 price hike compared to the T-Rex. But Amazfit did enough under the hood to justify the increase in pricing. 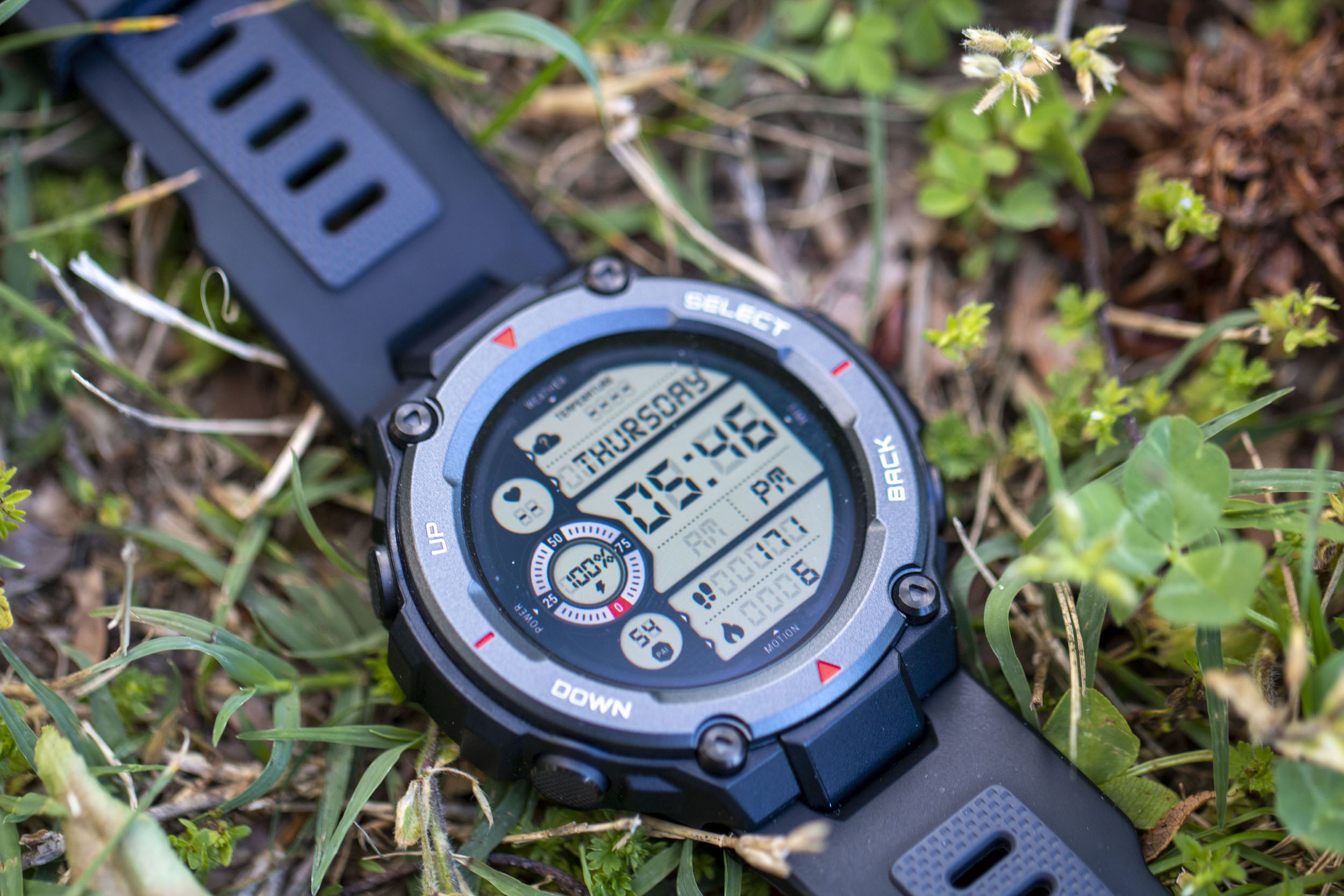 Starting things off, we’ll need to note that like its predecessor and all of the company’s other smartwatch/fitness tracker offerings, the T-Rex Pro relies on RTOS for its software. RTOS stands for Real-Time Operating System and acts as an extension of your smartphone instead of something that can operate independently. Notifications are mirrored, meaning that your wrist will buzz every time that your phone does, but you won’t be able to reply to those messages or answer phone calls from your wrist.

Those with anxiety about notification overload might want to look elsewhere, but on this front, the T-Rex Pro does a superb job. It would be nice to be able to message a quick reply back every now and then, but it’s not a make or break situation here. Instead, Amazfit has positioned the T-Rex Pro as a sort of G-Shock smartwatch without the worry of a steep price tag.

First and foremost, this is a rugged smartwatch, while providing and maintaining a lightweight profile to avoid weighing your wrist down while you’re in the gym. This weighs in at just 59 grams, features a decent AMOLED display, and has four navigation buttons placed conveniently around the edge of the watch. 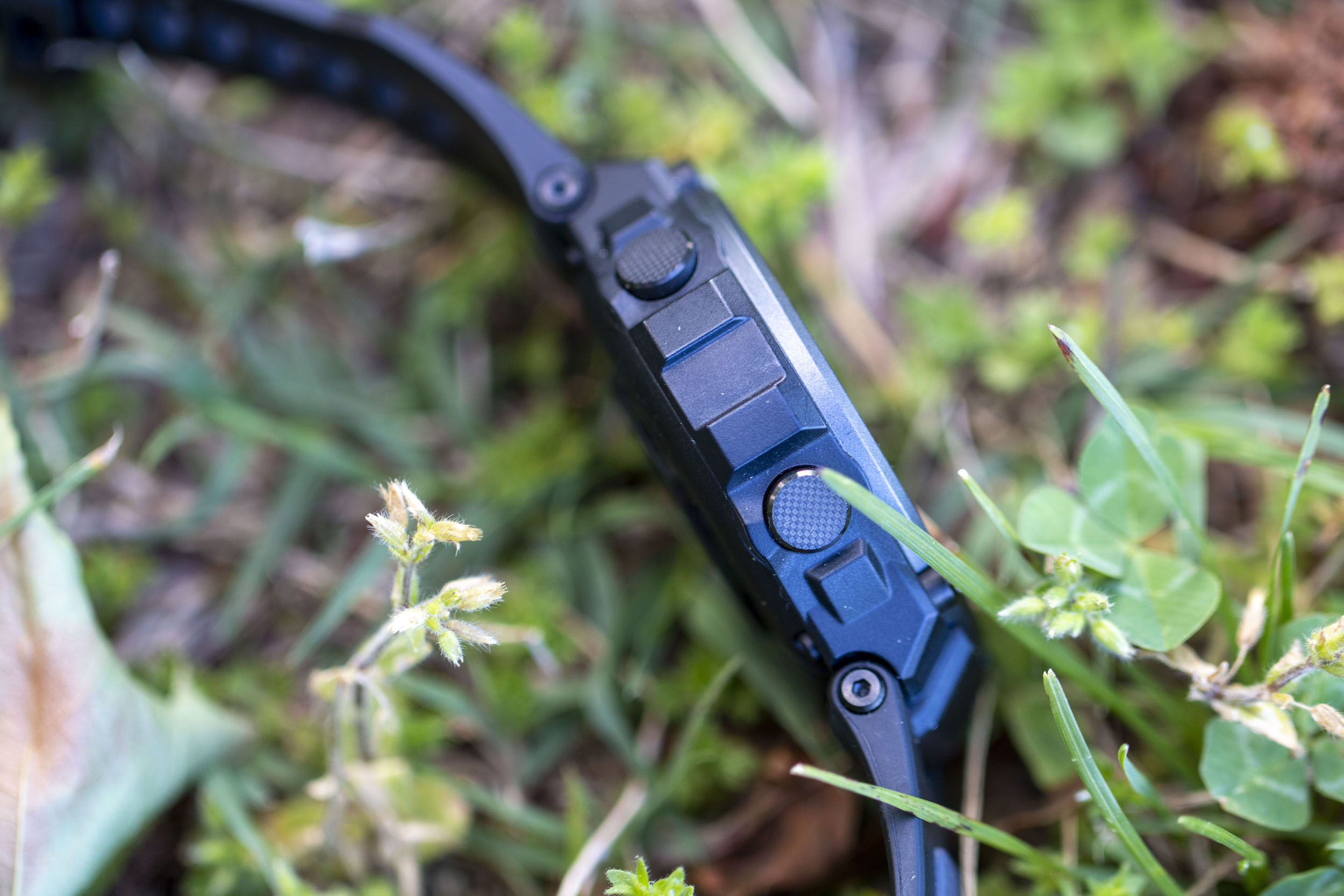 It was here that we came to realize the usefulness of having hardware buttons to navigate, instead of dealing with swiping all of the time. This is part of the appeal of other smartwatches like the Apple Watch with its rotating crown, allowing you to scroll through those notifications or navigate your apps without having to put your fingers on the screen and potentially block something.

Considering that this is a rugged smartwatch, Amazfit went to great lengths to ensure that it can handle anything you throw at it. It sports a 10ATM water resistance rating, while also being shock-resistant, and featuring the MIL-STD 810G spec for ruggedness. 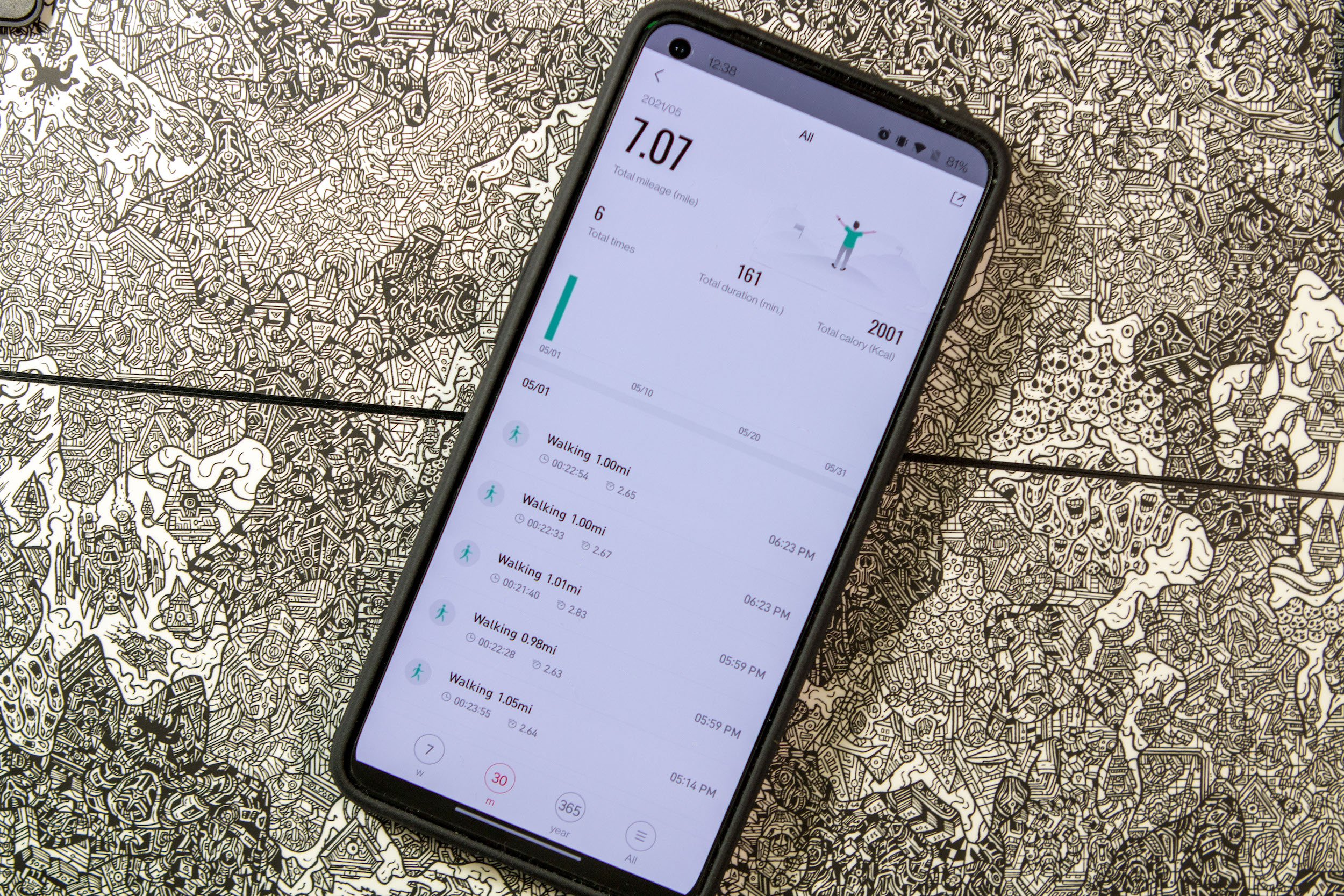 With the accompanying Zepp app, you’ll be able to adjust which apps can send notifications to your wrist, along with downloading and installing different curated watch faces. The app also acts as the hub for keeping track of your fitness data, even if it means that you have to dive a bit deeper in order to actually find that information. This was something that was a bit of a frustration, as there’s no discernible way to visit past workout history from the watch itself.

However, once you locate that information, it’s a whirlwind of data that can be easily explored, so you are provided with a better understanding of how you performed during your last workout session. Of course, there’s also the ability to track your sleep with the T-Rex Pro, along with tracking more than 100 different activities ranging from outdoor runs or walks and even things like kite flying, hula hoop, or playing darts.

The home screen of the Zepp app provides a quick snapshot of your progress throughout the day. Including things like your Heart Rate, Sleep Score, and Amazfit’s PAI score, or Personal Activity Intelligence. This is a feature that was developed with the purpose of scoring your activities over the past seven days. The information provided by your smartwatch generates the score, with the objective of being able to maintain a score of 100 PAI every week.

All-in-all, the accompanying Zepp app may not be the most intuitive fitness software we’ve ever used, but after you start diving into the different areas, you’ll be able to see all the information you want or need.

T-Rex Pro Review: Comparing it to the Apple Watch 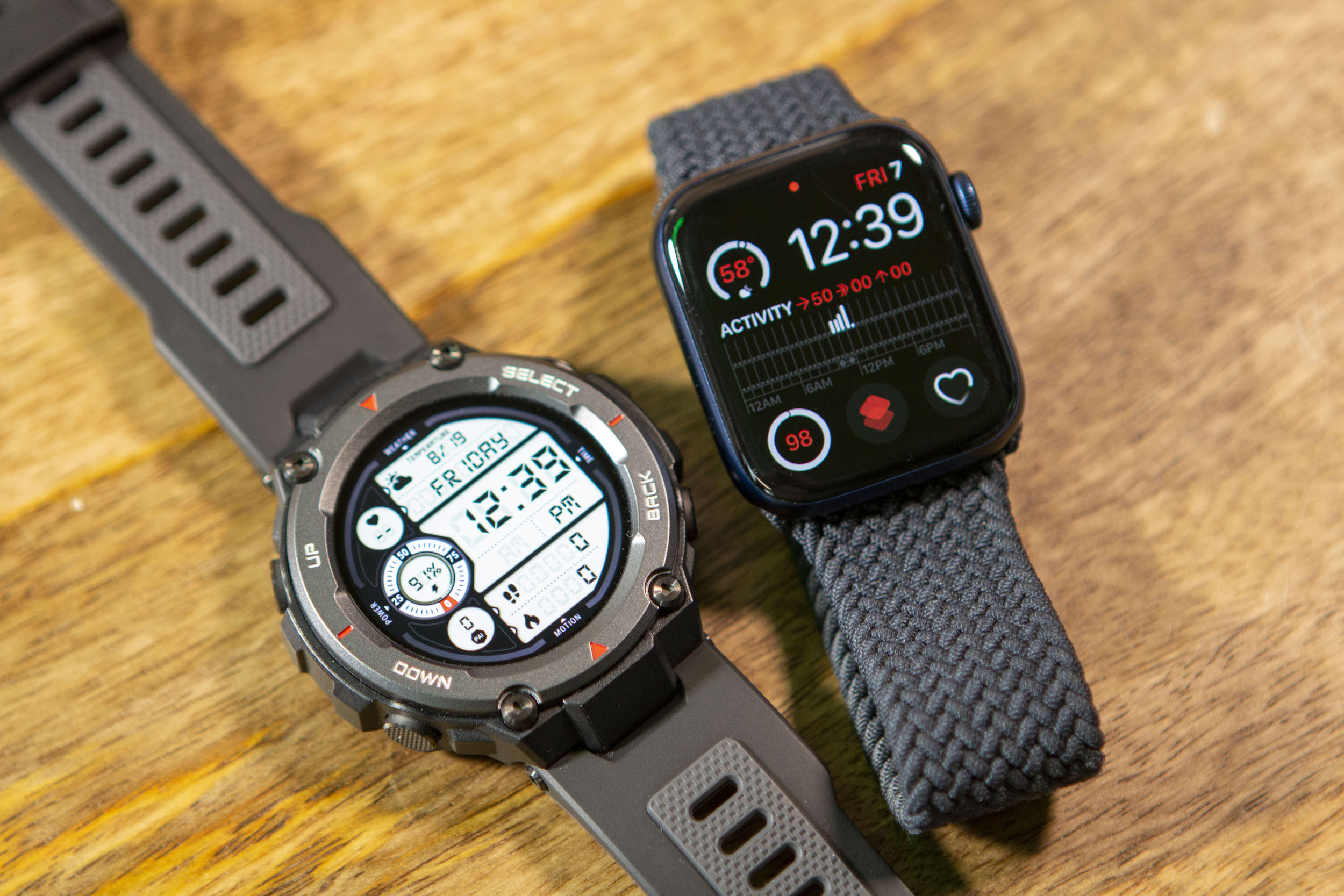 Whether you’re a fan of the Apple ecosystem or not, it’s tough to argue that the Apple Watch is not the best smartwatch on the market. The only real downside is that you’re limited to only being able to use with an iOS device, leaving Android users in the dust. Since this is pretty much the “gold standard”, we thought it would only be apt to compare the T-Rex Pro to the Apple Watch to determine how the two stack up.

In our testing, we went on several one-mile hiking trails, using the built-in workouts within both Amazfit and Apple’s smartwatches. This was done several times for the sake of getting an accurate reading, while also wearing the smartwatches on the same wrist. And truth be told, the results were pretty impressive.

Starting the Outdoor Walking workout from the mile markers on the trail, the Amazfit consistently provided more accurate distance readings. In one instance, we had reached the one-mile marker, which matched up with the T-Rex Pro, but the Apple Watch claimed we had only reached 0.97 miles. Heart rate monitoring was pretty much the same across the board, our Apple Watch measured the Average Heart Rate at 140BPM, while the T-Rex Pro provided a reading of 141BPM.

Sleep tracking was a little bit trickier, as the T-Rex Pro gave us a Sleep Score of 77, and read the sleep ranging from 1:37 am to 7:38 am. In the same period of time, the Apple Watch measured sleep from 1:22 am, lasting until 7:55 am, so we really aren’t sure why or where the discrepancy was here. This was consistent throughout our testing, but the differences were never off by more than 20-30 minutes. This can be a big deal if you are trying to track sleep down to the minute, but it’s really not a major difference.

We really were impressed by the T-Rex Pro’s workout tracking prowess, especially when compared to the Apple Watch. This wasn’t the most scientific testing, but to see more accurate tracking from Amazfit over the Apple Watch has definitely left us with a great impression.

T-Rex Pro Review: Should you buy it?

If you can ignore the fact that Amazfit is relying on RTOS, meaning that you’re not going to be able to install third-party apps, the Amazfit T-Rex Pro is absolutely wonderful. Battery life was excellent, lasting more than a week even with the Always-on Display enabled, but that’s not saying too much when you consider the OS. Nevertheless, if you are looking for a smartwatch/fitness tracker hybrid that just shows you the notifications as they arrive, but offers a great workout tracking experience, you definitely won’t be disappointed.

The Amazfit T-Rex Pro is a profoundly great fitness tracker and a solid smartwatch. It will show you notifications as they arrive, but the real prowess is in the activity and workout monitoring provided. If you don’t care about bulk, the T-Rex Pro is a fantastic choice.