Wear OS has finally been showing some feeble signs of life over the last year, but wearables for Android users remain a very open market at this point with nothing even vaguely dominant as the Apple Watch is for iOS users.

Personally I have gravitated to some of the best fitness trackers for the last few years as I found that they usually met the needs I had for notifications while still delivering the fitness data I was looking for. This was part of what drew me to review the Amazfit T-Rex by Huami. While it features a more traditional watch appearance than most fitness trackers, it delivers excellent battery life, offers comparable fitness data to higher-end fitness trackers, and comes in at an affordable price point.

Let’s take a closer look at everything the Amazfit T-Rex has to offer and see if it might be the wearable for you. 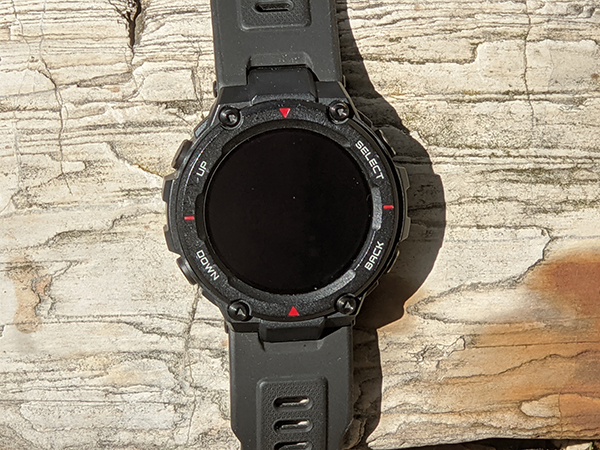 Huami is targeting the rugged fitness watch community with the Amazfit T-Rex, if you’ve seen any of the ads it’s all centered around climbing, running, cycling, and other fairly extreme activities. And even if you’ve missed those you probably could have guessed from the name alone that it was going to be a pretty aggressive look. From the four exposed screws around the watch face to the relatively large body with angular protrusions and four textured metallic buttons, it pretty well achieves its design goals.

The raised edges around the screen makes extensive interaction with the screen irritating, but it does a good job of protecting it from accidental damage and for the quick swipes and taps that you are going to be doing with the T-Rex and its included features it works perfectly fine.

If you want or need to avoid the touchscreen due to wet, dirty, or glove covered fingers the four buttons on the side allow you to move through most features on the T-Rex easily with up, down, back, and select commands. 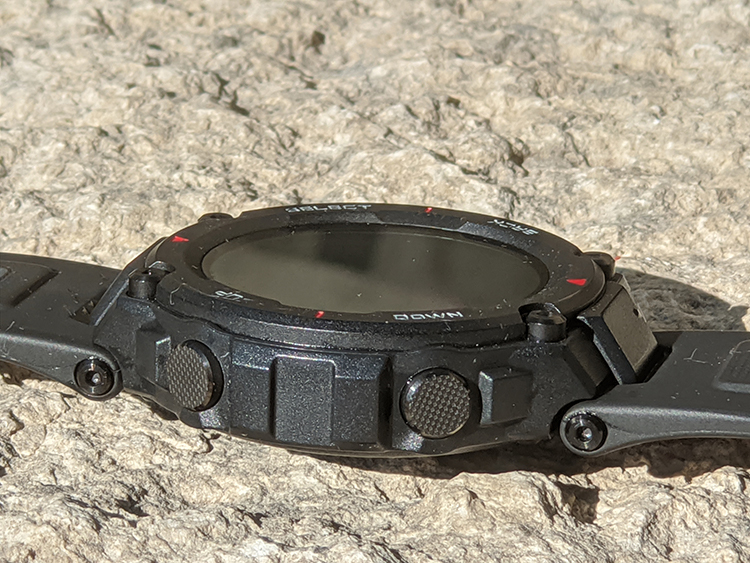 Given the rugged styling and size of the watch, the Amazfit T-Rex looks reasonably heavy, but it’s actually one of the lightest smartwatches I’ve ever used. It doesn’t make for the best first impression of the build quality as it’s hard to reconcile that weight with something that is going to hold up over time.

That said, after about 3 months of wearing the Amazfit T-Rex daily, it shows little signs of wear with just some minor nicks and scratches to the body which are to be expected. I built a new fence with an arbor and cleaned out and reset the rocks in my pond while wearing the watch. This naturally meant my watch came into contact with my saw stand, screws, wood, and rocks over the course of these projects. There are still no perceptible scratches on the Gorilla Glass 3 screen, something that often happens with a couple of weeks of using a smartwatch.

The watch is rated for 5ATM (withstands pressures equivalent to a depth of 50 meters) and I’ve worn it swimming a number of times without issue. Amazfit claims a variety of other military-grade certifications (12 in total) including extreme heat and cold resistance, humidity, salt spray, acid, and alkali resistance. I haven’t been able to test these, but the watch could fall quite shy of these claims and still deal with anything that most users are going to put it through.

Overall in my experience, the watch does actually live up to its rugged appearance and I think it should hold up to years of daily use without a problem.

The Amazfit app is available for Android and iOS and requires that you sign up for an account when you first set it up. The fitness focus for the watch is on display here as the setup involves entering your gender, date of birth, weight, height, activity goal (steps), target calories, and target sleep.

You then pair your T-Rex to the app by scanning a QR code on the smartwatch. This process finishes by updating the watch itself. It’s a bit more involved than the Wear OS smartwatch setup process, but it’s still pretty simple.

There are 30 watch face options in the app, varying from very simple analog to information-dense digital options and a blend of the two. While it would be nice to be able to customize this a bit more, I didn’t have a problem settling on a watch face that I liked.

It’s not integrated into the watch face, but you can also control your smartphone music from the Amazfit T-Rex, it simply picks up whatever is playing audio on your smartphone with pause, play, skip, replay and volume controls while playing music via YouTube Music, Spotify or any other music app.

Health data is obviously the primary focus of the Amazfit app and your home screen will display your steps, calories burned, and prior night’s sleep at the top with additional information like your sleep score, heart rate and your Personal Activity Intelligence (PAI) score for the week.

The data that is presented is great and the app will also allow you to track more of your fitness data like body measurements that can’t be captured using the smartwatch, but contribute to your overall fitness goals.

One thing I think the company needs to consider adding is a meal and hydration component. Personally, I use and love MyFitnessPal for that purpose, but a lot of users would appreciate having all of their fitness and nutrition tracking data in one place. 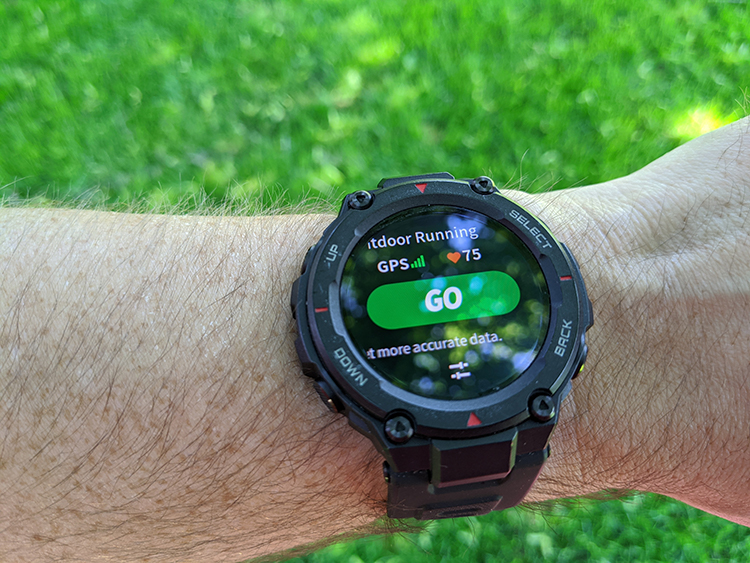 The Amazfit T-Rex covers all of the basic fitness tracking functionality you would expect along with a couple of extras typically found on more expensive options.

To start tracking an activity, tap the select button, and then choose from one of 13 different activities. These include outdoor running, walking, outdoor cycling, pool swimming, open water swimming, treadmill, indoor cycling, elliptical trainer, exercise, climbing, trail running, skiing, and outdoor trekking. A big green “Go” button will then greet you on the next screen with the option to just start or if you tap the setting button at the bottom of the screen you can set a workout goal or reminder for yourself.

Built-in GPS is one of the higher-end options that you’ll find in the Amazfit T-Rex. It usually took about 8-10 seconds to get a GPS lock when I started an activity and I found it to be very reliable when my pace was consistent, but it had a harder time properly tracking interval training. When my pace varied by a minute or more per mile across my normal 5k route I would see the Amazfit T-Rex lose about 0.03-0.06 miles versus my Suunto GPS watch and my Pixel 3. For most casual users this is negligible enough to be irrelevant, but it’s worth noting if you are serious about monitoring your precise distances and interval speeds.

I also had excellent luck with the heart rate tracking on the Amazfit T-Rex, the monitoring of my resting heart rate was dead on and even towards my max during running it held within about 5-10 bpm versus my chest monitor.

Battery life on the Amazfit T-Rex is excellent for a smartwatch and depending on your usage, it’s possible to achieve the claimed 20 days of battery life.

Personally, I typically saw about five to six days of battery life. My standard setup was to have alerts enabled for phone calls and text messages but disabled for other app notifications. I did not make use of the always-on display option, instead opting for the lift to wake which was reliable enough for me. I used the GPS on the watch to track my 5k runs most days and left the watch on for sleep tracking at night. I also had the heart rate monitoring set for every minute so as to record average resting heart rate, without pinging it constantly.

This is at least double what you will see from a lot of smartwatches and obviously if you value battery life, simply dropping some of the active GPS usage would add another day or two before needing to charge the watch. If you do find yourself running low on battery and want to at least keep your fitness tracking and basic watch functionality going you can switch over to power saver mode and dramatically extend your remaining battery life.

While more battery life is always better, I think the Amazfit T-Rex hits an excellent balance of features to battery life, I typically would just hook the watch up to its proprietary magnetic charger while I was making breakfast a couple of times a week and that was enough to never have to think about battery life and get the benefits of always wearing the smartwatch. 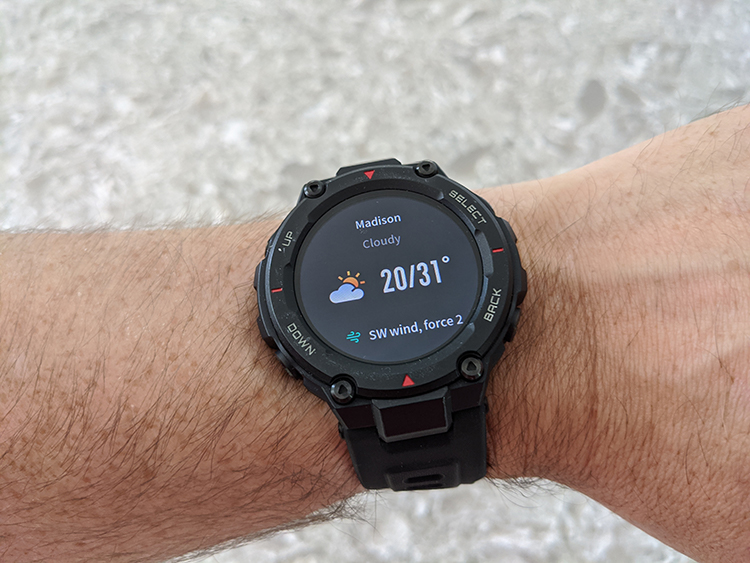 Speaking of always wearing the smartwatch, the Amazfit T-Rex is fantastically comfortable to wear thanks to its lightweight design and the fantastic soft silicone band that comes with it.

I have reasonably large wrists, so it’s possible that the physical size would be a problem for some, but for me, I very quickly forgot about it completely and had no troubles sleeping with the watch on, something that I’ve found irritating with some comparably sized smartwatches that I’ve used in the past.

As I mentioned at the outset, the price is one of the best features of the Amazfit T-Rex, at $139.99 it’s slightly more expensive than the average fitness tracker, but it comes in well below a comparably specced smartwatch. 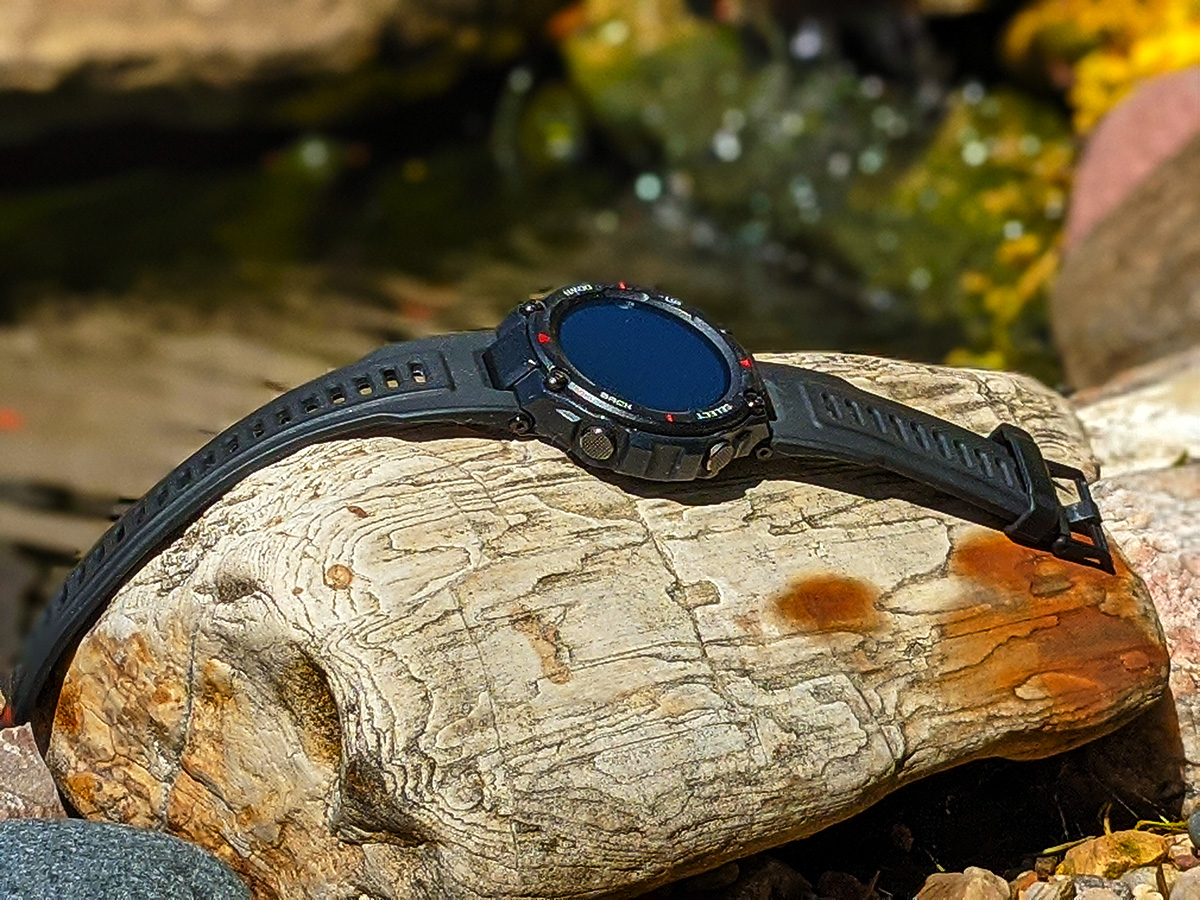 There’s a lot to recommend about the Amazfit T-Rex beyond just its affordable price. The built-in GPS means that you can track your workout even without your phone and with the days-long battery life you don’t have to think about charging another device on a daily basis.

While fans of traditional watches are likely to be put off by the lightweight body of the Amazfit T-Rex, those who haven’t used a smartwatch yet or have used fitness trackers so far will appreciate the nearly imperceptible weight and the comfortable band.