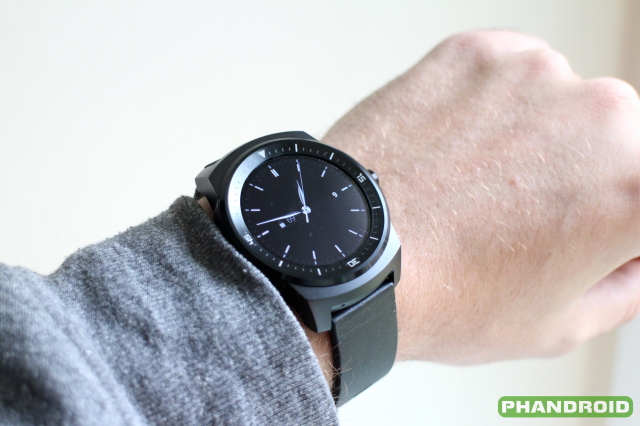 While LG was quick to jump into the Android Wear ecosystem with the original G Watch, the G Watch R feels more like their first true attempt at an Android smartwatch. It refines much of what was introduced with the G Watch while opting for a circular form factor that serves to merge the traditional with the futuristic. Albeit for a few flaws inherent in nearly all Android Wear devices, the G Watch R is about as good as it gets for a smartwatch. 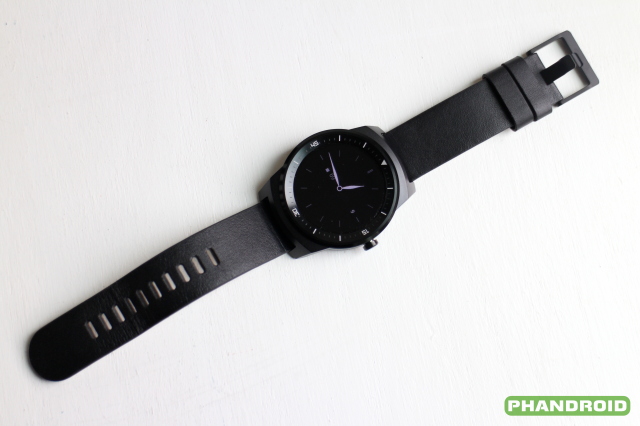 The LG G Watch R is the first piece of Android Wear hardware that, at least in terms of designs, recognizes it is a watch first and a smart computing device second. A lot of attention has been paid to the details of the design, from an analog-inspired bezel that serves to mask the issue of bulky screen-edge electronics to a genuine leather 22mm strap. If the latter doesn’t suit your taste, it can be swapped out for a nearly endless selection of watchbands currently available for your more run-of-the-mill (i.e. non-smart) watch offerings. A mock crown serves as a screen on/off switch and can also be used to power down the device or access system menus.

Going back to the bezel, it is one of the few instances where an Android Wear watch pays service to the more traditional form factor, but it also showcases a unique integration between hardware and software that hasn’t been explored with previous smartwatch offerings. The hands of the virtual watch faces sync up seamlessly with the physical markings on the bezel to great effect.

While the Moto 360 has won over plenty of fans with its round design, the G Watch R exploits the form factor to create perhaps the most complete Android Wear device to date. Its mix of flat black accents and quality leather for the strap imbue a refined classiness. This is a watch that looks sharp with any outfit, including a suit. On that note, the design of the watch is decidedly masculine, a trend all too common with the first crop of Android Wear devices. One can’t help but feel like the bulky, stark looks of many Android Wear devices completely ignore the female segment of the market.

And the G Watch R is indeed bulky, a chief complaint levied against the device in most early reviews. We would counter that at 46.4 x 53.6 mm, it is not quite as bulky as some would have us believe, but we can see how those with smaller wrists or an affinity toward a more subtle fashion might find it a turn off. In defense of LG, they did manage to cram quite a bit of hardware within, so we can be a bit forgiving of the watch’s girth. 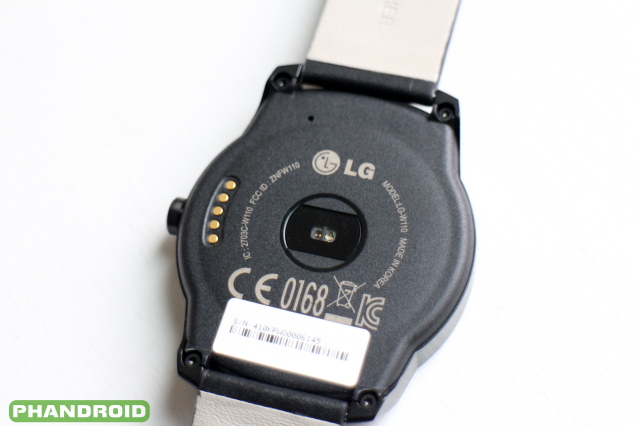 The focal point of the G Watch R experience is a circular OLED display measuring 1.3 inches in diameter. It’s 320×320 resolution is far from HD (and at times noticeably grainy), but it does not lack for visibility in nearly any lighting condition. In fact, at higher brightness settings the light from the watch face has a tendency to drown out the physical markings on the bezel, making them difficult to read in some lighting conditions. It’s a minor annoyance that can be avoided by choosing a proper brightness setting, but one worth mentioning.

The G Watch R is one of the more powerful Android Wear devices on the market with a Qualcomm Snapdragon 400 SoC clocked at 1.2GHz and 512MB of on board RAM. The watch features 4GB of built-in storage, though since the device must be constantly synced with a a smartphone where much of its data will be streamed from it’s hard to imagine a case where all of that storage space will be needed.

Rounding out the hardware are features like IP67 resistance to dust and water and a built-in heart rate sensor position on the underside of the watch. As with much of the heart rate sensing technology that has made its way to mobile devices in recent months, it is not always the most cooperative, but it comes as a nice bonus for those planning to use their G Watch R to monitor fitness-related activities. 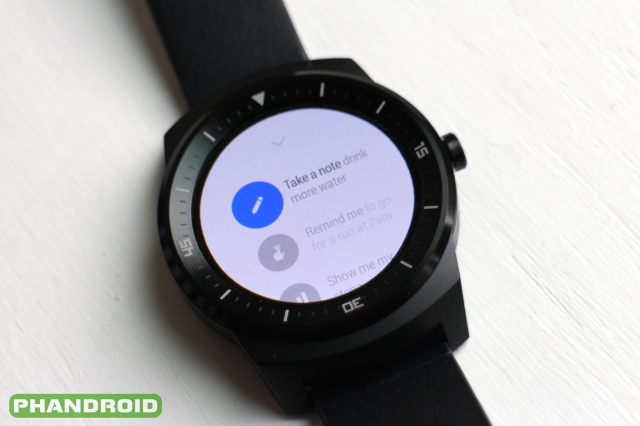 We’ve already mentioned how the G Watch R’s watch faces integrate nicely with the physical bezel of the device, and we won’t delve too deeply into the intricacies of Android Wear. For that, you might want to check out our Moto 360 review or our look at seven things we hated about Android Wear. It’s worth noting that Android Wear is a developing platform and looks to only get better with time; a Lollipop update that apparently addresses many of our concerns should arrive soon

Back to the G Watch R. While Google has promoted the circular watch face option alongside the more common square form factor found in watches like the original G Watch and Samsung Gear Live, the Android Wear software does not seem to support both equally. Info cards are cut off by the curving lower edges of the display, greatly reducing the amount of visible content when using the G Watch R. This is perhaps its biggest flaw. As a device designed for at-a-glance info, these display issues are a major hinderance to usability.

As with other Android Wear devices, the software experience is designed to act as a companion to and compliment an Android smartphone (we should point out that Android Wear devices are as of now only compatible with Android and not iOS or Windows Phone handsets). While the benefit of this is a platform that doesn’t attempt to do more than truly fits its form factor, it also amplifies its limitations. Far too often the Android Wear interface prompts the use to complete an action on their smartphone. Certain actions — music playback controls come to mind — possible through Android Wear end up feeling redundant.

We chalk most of this up to a platform still in its infancy. Some will argue that Android Wear launched before it was ready, and we can’t really say there isn’t some truth to that. How Android Wear matures will greatly influence the usefulness and longevity of devices like the G Watch R.

One thing the G Watch R has going for it is battery life. Depending on how you have your device set up (brightness, watch face always on, etc.), you can expect anywhere from a full day of use on a single charge to closer to two days. It features one of the larger power cells an Android Wear device has seen at 410mAh to help it achieve this goal (and a bit of additional design bulk).

Two days is impressive for an Android Wear watch, but it’s far from what many expect of such a device. Until manufacturers can replicate battery times of traditional watches on their smart counterparts, those looking for a truly watch-like experience will always be disappointed in the final result.

We’re not sure this a truly fair comparison given everything the G Watch R does beyond simply tell time, but it’s understandable that folks don’t want yet another device to charge at the very least every other day. Still, as we said the battery time is impressive for an Android Wear device of this class, especially considering its fairly powerful hardware. 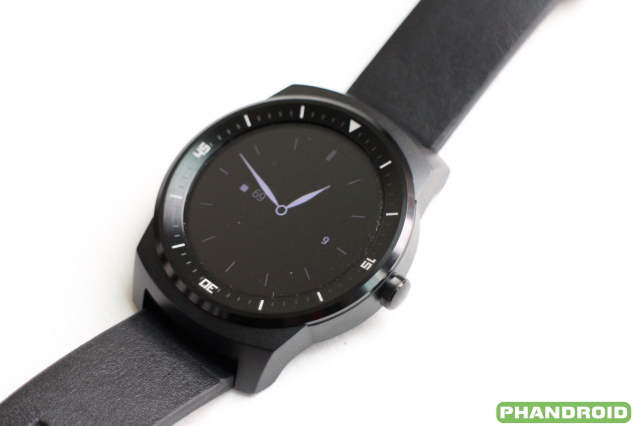 The G Watch R gets so much right in terms of design and hardware that it’s hard not to call it the best Android Wear device on the market. It’s bulkiness won’t be for everybody, but aside from faltering in the software department slightly, which falls more on the side of Google, it is a well-rounded (no pun intended) smartwatch that provides an experience that melds our expectations of a traditional watch with the forward-thinking capabilities of wearable tech.