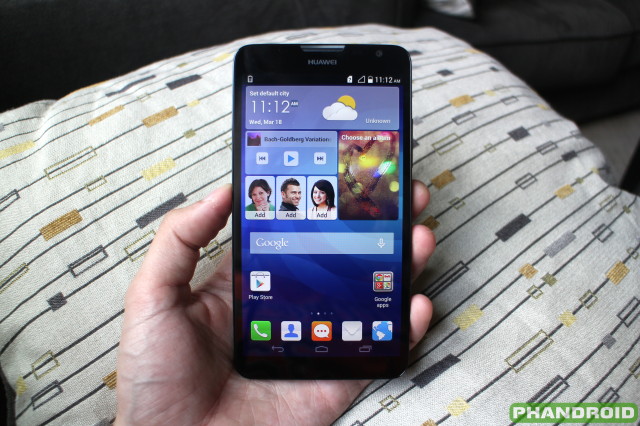 The Huawei Ascend Mate 2 4G LTE has a name that is matched in size by its substantial frame, and as such won’t be the smartphone for everybody. The phablet brings a compliment of specs that provide plenty of power, but it doesn’t quite achieve on the same level as competing Android flagships. That’s alright — there is always a tradeoff. The Ascend Mate 2 looks all the more appealing when you consider its unlocked, off-contract pricing of $299. Read on for our full review. 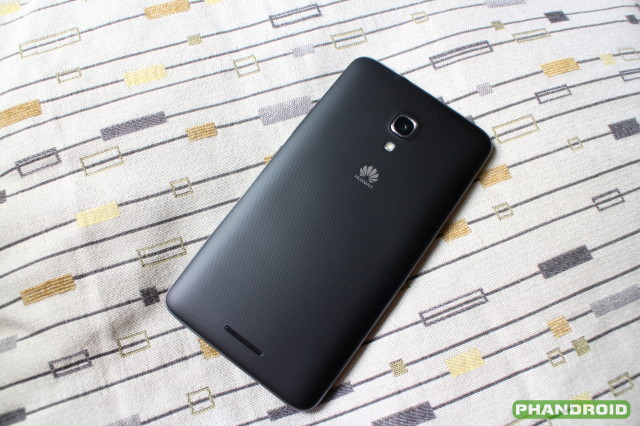 There’s no question the Huawei Ascend Mate 2 is a big phone. The minute you pry the handset from its box you will realize this fact. And you’d expect as much considering the phone boasts a 6.1-inch display. Once you go beyond this immediate conclusion we are left with a handset that is relatively uninspired in terms of design, which is a bit of a shame. The Ascend Mate 2’s large size provides plenty of real estate for dreaming up a more intriguing look and feel, but instead we get a generic plastic rectangle that seems a simple (albeit much bigger) rehash any number of smartphones that came before it. 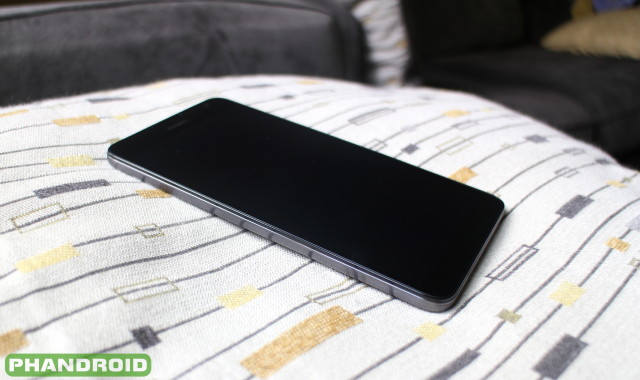 The Ascend Mate 2 measures in at 6.34” tall and 3.33” wide. At 0.37” thick, it’s not the thinnest smartphone on the market but remains slim all things considered. The phone weighs just a hair over 7 ounces. But you want to know how it feels in the hand, don’t you? Quite burdensome, actually. It’s hard to imagine being able to use this thing with one hand, and Huawei hasn’t made any particular efforts to specialize the design of the device for its larger form factor (e.g. incorporated stylus à la Samsung Galaxy Note).

The Ascend Mate 2 seems to be a device built around tradeoffs, and the handset’s 6.1-inch IPS+ display is perhaps the best example. While it offers plenty of screen real estate with which to take in video, games, the web, and more, it does so with a yawn-inducing 720p resolution. Don’t get me wrong: the display doesn’t look bad, but it just feels a bit underwhelming compared to the 1080p Super AMOLEDs and Quad HD displays of the world.

We noticed that the display on our review unit also reacted curiously when applying liberal pressure. The area below where the  finger makes contact with the display would often distort under more generous taps and long-presses. We haven’t seen a capacitive touch screen react in that way in quite some time, and such issues carry all the markings of sub-par materials.

It’s a shame. With a 6.1-inch display, the screen is, almost by default, the defining feature of the handset. When making a device of this size, it is imperative to deliver in this area, even if every other spec on the phone was garbage. And this sentiment reflects back on the Ascend Mate 2 as a whole. It is a device that could have been much more if only Huawei had taken advantage of its form factor.

But again, we get it. It’s a tradeoff. The display is one of the more expensive components that goes into a smartphone build, and keeping the Ascend Mate 2 priced at $300 off-contract requires skimping in some areas. We just wish it wasn’t the display that suffered. 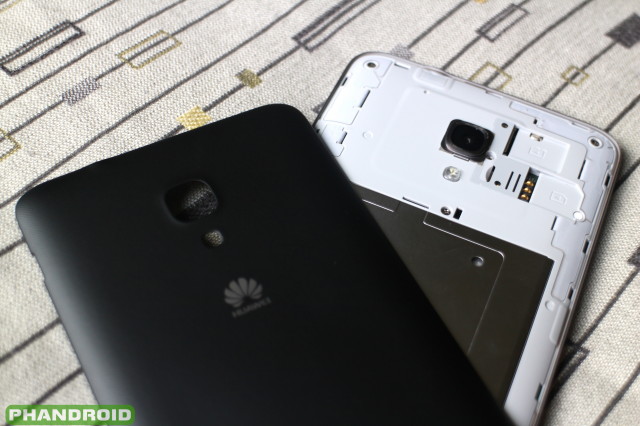 A solid mix of hardware makes the Ascend Mate 2 workman-like, but it lacks some of the flash you might expect from a brand new Android smartphone. It uses Qualcomm’s aging Snapdragon 600 chipset to provide quad-core processing at 1.6GHz. Pair that with 2GB of RAM and you get respectable performance , but it’s not quite the productivity powerhouse you might expect from a phablet-class device. Nevertheless, the Ascend Mate 2 is well-suited for nearly anything you could throw at it, from 3D gaming to HD video. Just don’t expect the smoothest performance at all times.

The standard handset ships with 16GB of internal storage, but the phone also sports support for MicroSD cards up to 64GB. Storage is accessed via a removable back plate that provides access to both the card reader and SIM slot. While the handset will be sold unlocked by Huawei, it will only support GSM networks like T-Mobile and AT&T in the United States. Customers of CDMA carriers like Verizon and Sprint unfortunately will not have the option to use the Ascend Mate 2 on those networks.

While many of the Ascend Mate 2’s other hardware specs fall just shy of impressive, the battery most certainly does not. A non-removable 4050mAh battery can keep this phone going, quite literally, for days.

It has so much excessive battery power that the phone can even be used as a portable charging station for other devices. This might come in handy if you carry a secondary phone or — if you are a glutton for punishment — a tablet in addition to this already large 6.1-inch smartphone. In reality, the feature will likely get the most use showing up your friends. You will offer to charge their dying iPhones and Android devices with the caveat that they must listen to you boast about the impressive battery life of your own phone.

But if you are only concerned about keeping your own device powered, Huawei has you covered here. It would not be extraordinary to get two days (or more) of charge out of the Ascend Mate 2 with average use. 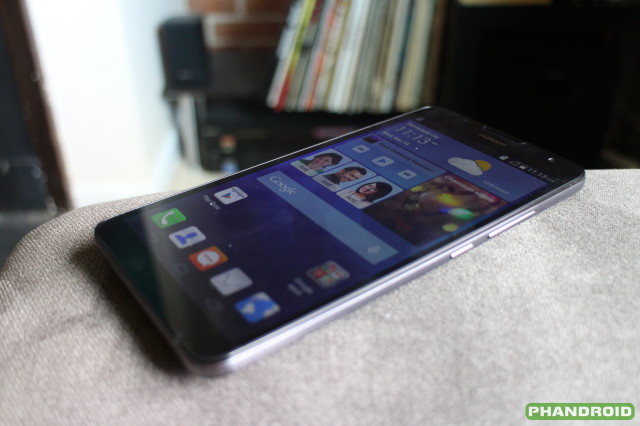 If the Ascend Mate 2 has a glaring weak spot it is its software. An Android 4.3 build is skinned with Huawei’s Emotion UI, an interface that is looking dated in comparison to Google’s latest Android guidelines. While manufacturers like LG, HTC, and even Samsung move toward a refined user experience with simple, tasteful design elements, Huawei’s take remains squarely rooted in the more bubbly, childish Android of yesteryear.

On top of an interface that lacks much visual appeal, Huawei hasn’t done much to differentiate the software of their device. They offer a few options like one-hand mode, but even these seem a bit half-baked. One-handed operation only applies to the dial pad, which is nice but ultimately a part of our phones that we interact with less and less. One might expect Huawei to take a page out of Samsung’s book and offer a one-hand mode that shrinks the entire interface down to fit on a more manageable portion of the screen. With the Ascend Mate 2 you can expect to always type with two hands.

Likewise, Huawei’s W.o.W. key is a nice floating toggle with access to quick shortcuts, but half are redundant versions of Android’s software navigation keys and there is no option to customize the functionality of this key. It was also mildly annoying that the toggle can only be snapped to the edge of the display rather than placed anywhere the user desires.

Huawei failed to cease an opportunity to provide an experience truly unique to the Ascend Mate 2 and its form factor, and the result is a device that feels like a rather pedestrian smartphone in a much larger package. 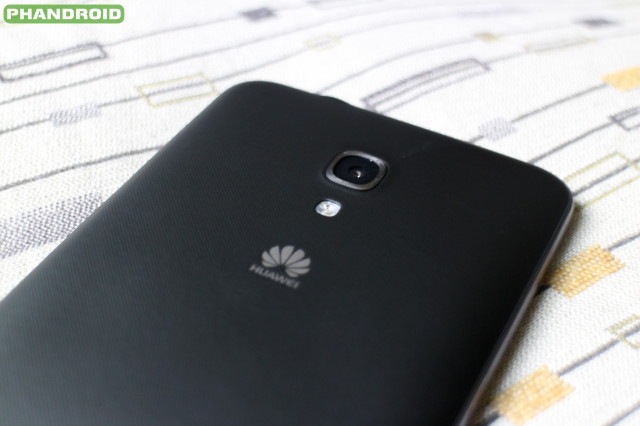 Huawei skimped in many areas on the Ascend Mate 2, but one where they did not was the camera. A 13MP sensor provided by Sony is capable of producing some pretty decent shots, although Huawei hasn’t offered much to enhance the photo experience. The camera app is straightforward, providing only a few shooting modes (including shot and sound), but pair the 13MP camera with a more advanced app from the Google Play Store and the Ascend Mate 2 remains surprisingly competitive in this space. 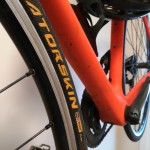 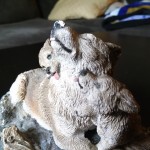 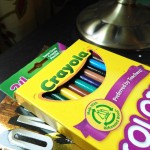 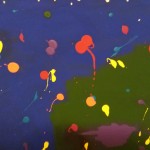 Perhaps more impressive than the 13MP main camera is the 5MP front-facing camera, which seems to have gotten a bit more attention from Huawei. The wide-angle lens makes quick work of selfies and even features a “groufie” mode for taking panoramic group portraits. 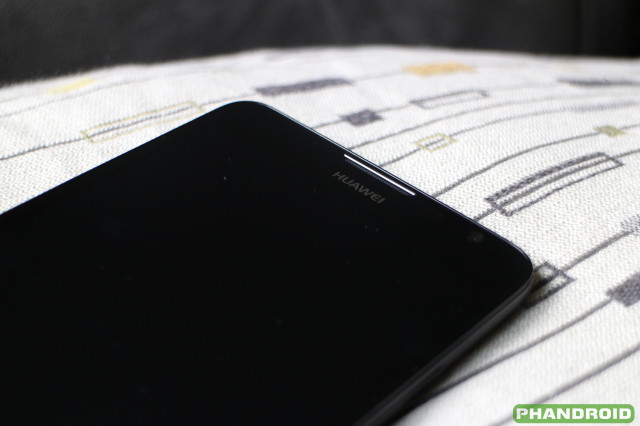 You want a phablet that you can own at a middle-of-the-road price without the hassles of a long-term carrier contract or monthly installment plan? You might consider the Huawei Ascend Mate 2, which is now up for pre-order via GetHuawei.com.

It’s an ambitious device from a manufacturer looking to make a splash in the US market, but even its makers admit that it won’t be for everyone. For us, the Ascend Mate 2 seems a bit hesitant, never pushing the boundaries of what it could really be, instead settling for a device built on compromises of cost versus performance.