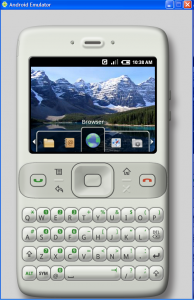 Not that we need formal confirmation, but some new slides presented in the Apple vs Samsung battle of 2014 have confirmed that Android originally didn’t implement a way to input commands, text or anything else by way of touch screen. As early as 2006, Android was designed to be a platform controlled by nothing but buttons.

“Touchscreens will not be supported. The product was designed with the presence of discrete physical buttons as an assumption. However, there is nothing fundamental in the products [SIC] architecture that prevents the support of touchscreens in the future.”

We’d always assumed as much, with early snapshots of the Android SDK and Emulator portraying a Blackberry-esque device with trackpads and a full hardware QWERTY.

What we actually ended up with was the G1 and a platform that was almost completely driven by touch. That platform got even more button-independent when the MyTouch 3G dared to ditch the hardware keyboard.

The rest, as they say it, is history. For what it’s worth, the document confirms that all the other staples of the Android platform — such as widgets, notifications and user-made apps — have all been there from jump street.

The point of the slide was to confirm that Google didn’t have intentions to introduce touch until after the original iPhone was announced in 2007, which should stand to help Apple in their whole “Samsung is copying us” hissy-fit they’re having.

On the contrary, it confirms suspicions that Apple is using their latest battle against Samsung to target Android as a whole, which is the reason Google and the key executives responsible for Android have been pulled into the courtroom.