Apple vs Samsung 2014 kicks off today, Apple wants Google to sit this one out [UPDATE] 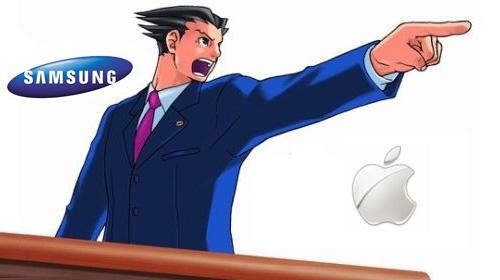 Yesterday, we gave you guys a run down of what is sure to be another fun filled year in the pissing match that is Apple vs Samsung: Part 2. Once again, the biggest mobile heavy weights on the glob will duke it out in a courtroom, with a jury of 8 ultimately deciding the victor.

Today, Apple outlined their overall strategy, claiming — just like in the previous trial (the one that found Samsung guilty of patent infringement) — that they put it all on the line back when they introduced the world to the original iPhone, only to have Samsung copy that magic and churn out millions of copy-cat products that have seen Samsung raking in billions of dollars every year.

This time around, there’s a whole new group of Samsung products Apple is claiming infringe on their IPs, and although Apple’s legal counsel says they could pull out over 50 patents Samsung is currently infringing — they’ve carefully chosen only 5 patents that are sure to bring them the win. Apple is hoping to prove to the court that because of these 5 infringed patents, they should be awarded $2 billion dollars. This number compiled by “experts” is a rough estimate of what it would have cost Samsung, had they just licensed these patents the legal way.

Yesterday we heard that Samsung could be calling in Google for backup, but during Apple’s opening statement, they mention that although Google made the operating system Samsung uses in their mobile devices (and is in most cases, the target of the infringement) it’s Samsung selling these products all over the world — not Google.

The best part about the trial is that because the lawsuit was filed back in 2012 (but only just made it to trial), many of the devices in question are no longer being actively sold. Sounds almost pointless to be pouring all this money into a trial, but we’re sure this is more about the principal for Apple. At this point, it sounds like Apple is simply trying to make a point. A very expensive one.

Samsung’s opening statement was a bit more juicy than Apple’s. According the the defense, they allege it was merely competition with Samsung (and Android) that kept Apple up at night — and they have the internal emails to prove it.

The email in question links to a WSJ article titled “Has Apple Lost Its Cool to Samsung?” In the post, the WSJ talks about Samsung’s “Next Big Thing” marketing campaign — the one making fun of all the hipsters waiting in line for the next iPhone — in which Apple’s marketing chief Phil Schiller responds to the email with: “We have a lot of work to do.”

Samsung alleges that Schiller became so “obsessed” with Samsung’s new marketing campaign, he even asked Tim Cook to look into dropping their long time ad company TBWA\CHIAT\DAY. Schiller will be Apple’s first witness to take the stand once opening statements have concluded. Samsung is asking for $6.9 million in a counter suit.

The jury consists of 6 men and 4 women from all walks of life (2 of which were dismissed). Everything from businessmen, to police officers and retired teachers. The trial will be ongoing throughout the entire month, with each side having 25 hours to make their case. Grab the popcorn and get comfy — this could take awhile.