In business, just like in real life, the biggest guys are often the slowest. If recent speculation that Comcast hopes to acquire Time Warner are true, then two 800-pound gorillas are about to become a 2-ton King Kong in cable and entertainment.

Many believe it’s a strategic move to combat the trending growth of services like Netflix and Apple TV. But keep in mind that both Comcast and TWC already stream Netflix through their bandwidth, directly to customers, practically serving as Netflix’s personal entertainment butler.

So let me get this straight: the quicker Comcast delivers bandwidth to consumers, the better their Netflix experience, which in turn helps their competitor’s? Comcast shouldn’t be able to throttle (purposefully slow down) Netflix service, and I’m not suggesting they are, but this is at the heart of the net neutrality debate you’ve been hearing so much about since 2010.

It affects customers. That’s why Netflix puts out a monthly speed report that rates Internet Service Providers in the USA, transparently listing AVG speed they bring to consumers in Mbps. So where do you think media powerhouse – Comcast – sits on that list? 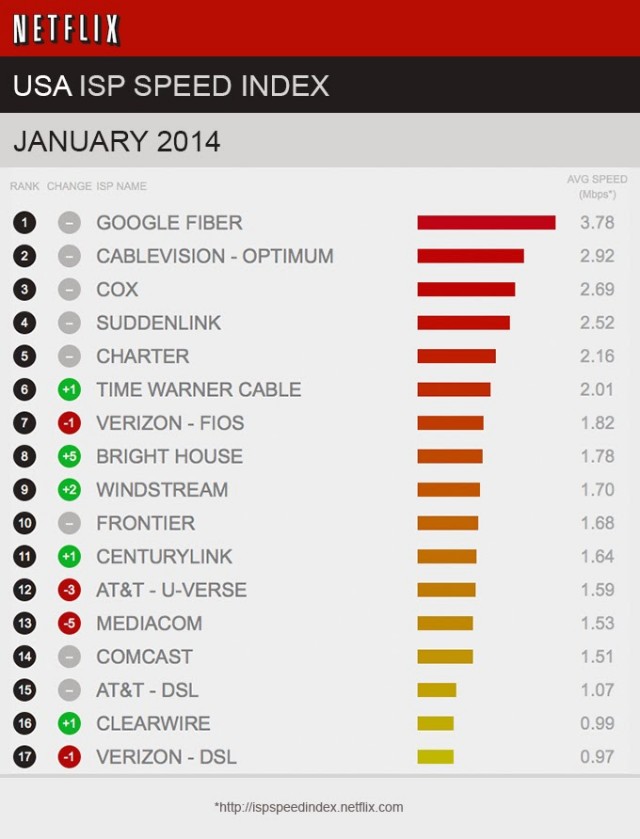 Comcast ranks 14th out of 17 with a miserable 1.41 Mbps. Their recent flirt buddy, TWC, might actually be the one in control, boasting a #6 ranking with 2Mbps. But alas, Google Fiber is the clear #1 favorite at 3.78 Mbps. Unfortunately, Google Fiber is only available in a very select number of cities: Kansas City, Austin (TX), and Provo (UT).

The bottom line? Comcast customers have speed problems with Netflix. If when chatting it up with friends, you’ve got way more “buffering” and “cannot connect” complaints than them, you’ve probably got Comcast. They’ve probably got 1 of the 13 providers that are better. And at times, way better.

I’m obviously over generalizing: dynamics change from market-to-market, neighborhood-to-neighborhood, and building-to-building. As a Comcast customer myself, I find their service leaves a lot to be desired. Unfortunately, Verizon FIOS is not yet available in my area (Baltimore) and our city lost the original bid to attract Google Fiber.

So I’m stuck with Comcast because they’re the only decent option. Meanwhile, the industry continues to consolidate, soon to offer even less options.. Time Warner might rank #6 on that speed list right now, but how far do you think they’ll fall once Comcast gets ahold of them?

Do you have Comcast, Time Warner, or Google Fiber service? Let us know about your speeds and experiences in the comments!