Uniquely Android is a series we started that shines the spotlight on those apps that take advantage of the unique capabilities of the platform and provide an experience that you wouldn’t find in most other phones. Previously, we have featured Plug In Launcher, AirDroid, Shush, Llama, Swiftkey 3, SwipePad, Widgetsoid2.x, Unified Remote, AirCalc, WiFi Keyboard, Puzzle Alarm Clock, Notif and Mac Remote.

For the most part, the purpose of launcher applications so far was to offer a lighter alternative to the default ones, with some additional capabilities such as theming, adding power-user capabilities such as multitouch gestures, etc. However, ever since Facebook demoed Home, I believe it showed a lot of people to seriously consider offering unique experiences with their own implementations. One such app I have come across since is Everything.me, which has a few couple of elements that I want to highlight.

The first feature is what they have termed as “Smart Folders”, whereby they classify your apps into categories such as social, utilities, location, etc, and add these folders to your desktop by default. You can remove the folders, or edit their contents (which is recommended, since they are not always perfect), create your own, or also choose from a large set of ones that they have curated on their own. 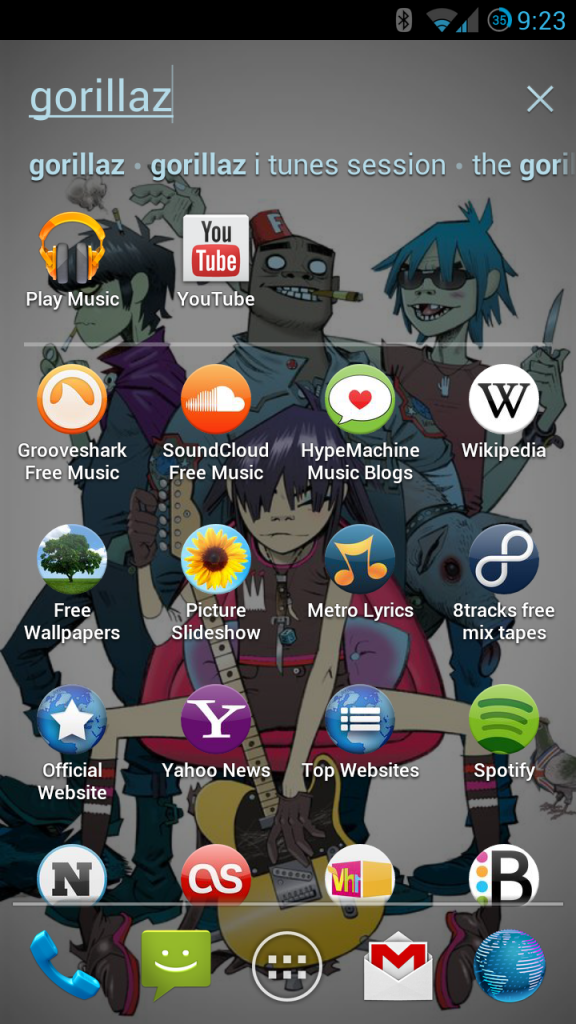 The Smart Folders highlight your installed apps for a category on the top, and also link to various mobile web pages. For example, the social folder links to sites such as Quora, Reddit, LinkedIn and The Fancy, etc. While it is a neat idea, particularly to discover new services for categories you are already interested in, I wish they simply opened the links in the default browser instead of a WebView, as they do currently.

The main feature, however, would be their persistent search bar on the top. I first confused it with maybe a social networking feature with the “What’s on your mind” text, but it turns out that it’s a pretty powerful search tool. The best way to understand it would be to see their demo video. In essence, it performs a search based on your query, highlighting results from your installed apps (contacts pop up higher when you search for a friend, or Google Play is pushed up for musicians) while also providing responses from across the web. They also change the background to fit in well with the query, as the screenshot for my search for Gorillaz on the right shows.

Everything.me is still in beta, and is currently only available in USA, UK, Spain and Canada. There are a few reasons that I cannot pick it as my first choice over Nova Prime. However, I’ll be keeping a keen eye on their progress, and you should certainly head over to their Play Store link to give it a run.

I’m really looking forward to what other companies might have in store, with my dream launcher being some sort of Google Now-powered launcher that customizes the experience based on various contextual parameters, such as where I am or what I’m doing. Damn, the future of Android is looking brighter by the day.