Uniquely Android is a series we started last week to shine the spotlight on those apps that take advantage of the unique capabilities of the platform and provide an experience that you wouldn’t find in most other phones. So far, we have featured Plug In Launcher and AirDroid.

When I first introduced the series, I mentioned that some of the apps featured might include a small feature set. Honestly, I wrote that knowing that one day, I’m going to be writing about Shush! The app does just one little simple task, but it does so extremely well: when you silence your phone’s ringtone, it offers you with a dialog (screenshot attached) with which you can choose for how long you want your phone on silent. After that, it puts the volume back on for you. 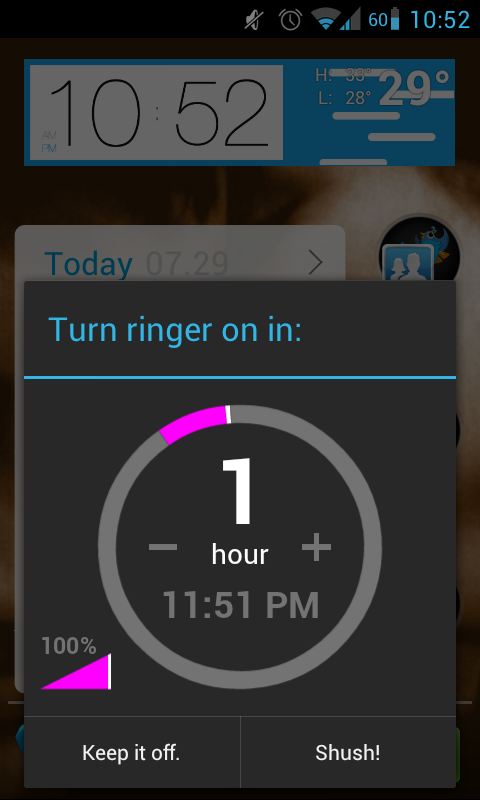 It’s an incredibly useful little app that I’ve used for a long, long time. It comes in handy every time I’m at the movies, in any meeting or when I used to be in class. But that’s not the only reason Shush gets a feature, it also does for the fact that the app was one of the first to be extremely polished look and UX-wise.

They didn’t offer you a HH:MM picker to choose how long you want your phone Shushed since, honestly, picking two things would end up being a pain. Their circular slider made the app a lot more user friendly and, deservedly, the app was featured extensively on the old Android Market. It has seen over half a million downloads, and maintains a 4.7 star rating.

If you’re like me in that you often forget to put your phone’s volume back on, this is a must-have app. You can download it over here.

Note: I’m shaking things up in this series by asking you to recommend some apps that you feel I should write about next week. Just mention them in the comments. I’ve got a list of my own, but would love to come across other “unique” Android apps, too.