Uniquely Android is a series we started that shines the spotlight on those apps that take advantage of the unique capabilities of the platform and provide an experience that you wouldn’t find in most other phones. Previously, we have featured Plug In Launcher, AirDroid, Shush, Llama, Swiftkey 3, SwipePad, Widgetsoid2.x, Unified Remote, AirCalc, WiFi Keyboard, Puzzle Alarm Clock and Notif.


What is so unique about Mac Remote? 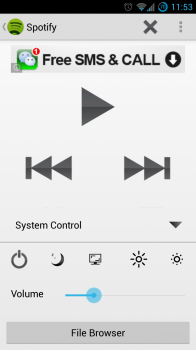 I love my Macbook, and I honestly cannot imagine switching my computing OS of choice. However, I often looked on from the sidelines as several developers built some great little tools that allowed Android and Windows to work well in tandem. The perfect example is Unified Remote, which I have previously covered in the Uniquely Android series. If you go through the comments from that post, you’ll notice a few others, like me, who wished there was an alternative for us Mac users.

Until recently, I wasn’t aware of any, and I had pretty much lost all hope of ever finding one. But, as fate would have it, I stumbled across Mac Remote deep inside the archives of Reddit’s /r/androidapps. Once installed, I just needed to setup the connection from my Macbook’s System Preferences and connect over my WiFi network. No software was required on the laptop itself.

Within a few minutes, I had the power to control a bunch of apps on my Macbook via my phone, including iTunes, VLC, Keynote, Powerpoint, Quick Time and Spotify. I also gained access to some system settings, such as volume, brightness, shutting down the laptop and putting it to sleep. The range isn’t anywhere near Unified Remote’s, but it is a lot better than nothing.

How does it work?

The setup itself is extremely easy, and demonstrated via a tutorial. All a user needs to do is enable Remote Login inside the Sharing System Preference, and then connect to the Macbook from within the app using the laptop’s Username/Password credentials and IP address. After that, just choose the app to control from the sliding menu within Mac Remote.

The list of apps supported is quite limited, and there is no way to add custom commands. My biggest disappointment is Chrome, since I spend quite some time watching YouTube videos and also using Impress.js for my presentations at work. The UI isn’t the most inspiring either, but it isn’t too cluttered and definitely gets the job done.

Overall, Mac Remote is a must have app for those of us who have an Android device and a Mac because of the functionality on offer, even if it is just for VLC. You can download Mac Remote via this link.