Google has greatly improved the Android Developer’s console over the years, but one thing it’s still lacking is the ability to give developers a quick snapshot of their apps’ performance. How many people downloaded it yesterday? What was the average star rating? Are we getting unusually negative feedback that might have been triggered by a server bug? This is all valuable information to have at your fingertips, but Google hasn’t provided a polished “quick view” solution to address these questions.

Many of the bigger development companies face these same challenges, but with size comes resources, and they’ve been able to develop their own internal tools. What about the little guy? Fortunately, an app aptly named App Stats has just been released on the Google Play Store to fill this need.

The team at cloud.tv (also developers of the mega popular “HD Widgets“) recently made this internal tool publicly available for other developers to download. It’s in beta, so don’t expect the red sea to split for you (feedback appreciated in the comments), but right off the bat I’ve found App Stats to fill a hole that I’ve desperately hoped someone would fill. Call it dorky, but for developers, App Stats is pretty darn exciting.

The app is delightfully simple, and afterall, isn’t that the idea? App Stats looks and feels just like the Google Play Store, allowing the user to horizontally scroll across the following tabs:

But make no mistake: “My Apps” is where most of the excitement occurs. Press the + button in the top right, enter your app’s name or search term, and select an app to add to  your portfolio. Add your own apps, apps from competitors, and anything else you consider worth tracking at a glance. 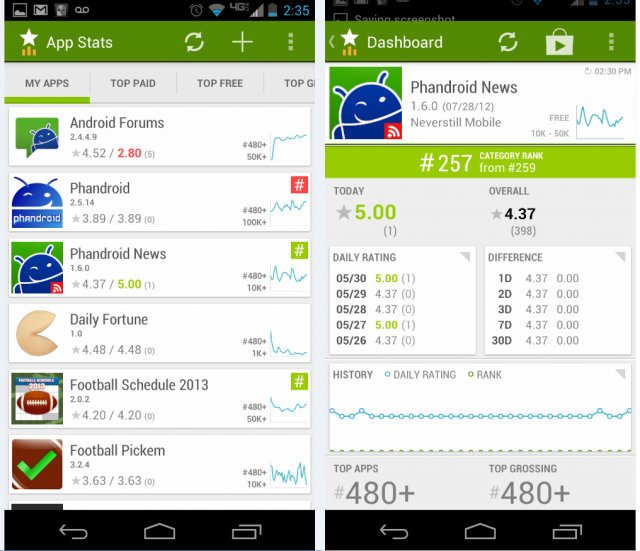 After adding and re-ordering your “My Apps” section, you’ve now got a nice and clean list. Each row contains the following info:

They’ve color-coded today’s rating average to be green (signaling better than average performance) and red (under-performing). They’ve also placed green and red icons in the top right of each row to indicate any important events, achievements, or downfalls- again, color coordinated. This allows the user to quickly scroll their list of apps, seeing what’s doing well today and what apps have pressure points and problems, encouraging developers to dive in deeper where appropriate.

Tapping into a specific app, whether on your “My Apps” view or one of the other views, gives you more detailed information for that app’s performance. You can even tap another level down to get more information on specific app related events such as price drops, ranking changes, and other relevant details over a 30-day period.

App Stats isn’t the end-all be-all for app analytics, and that’s a good thing… because that’s not its purpose. App Stats takes all the information out there, boils it down to the most important information you’ll want to know on a daily basis, and feeds you the highlights. You can dig a little deeper if you want, but the beauty is in keeping a pulse on your apps and competition with minimal effort. 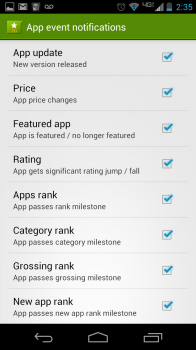 Having this tool allows several benefits. First of all, it’s a huge time saver, and time is money. Second of all, you’re able to quickly identify when your app is under-performing, and potentially remedy the problem through bug fixes and customer support. This gives you the best chance to maintain high ratings, thereby maximizing your potential downloads, app purchases, and consistent use.

Notifications will become an invaluable tool, especially for developers who are obsessed with constantly checking their app stats throughout the day. It’s fun to do but is a total productivity killer. While status notifications are currently quite simple, the cloud.tv team is currently perfecting a formula that will send the most important notifications, achievements, and warnings to your status bar, allowing you to focus on your product while receiving updates rather than wasting time on continually reloading. Of course the user will be able to customize notification thresholds and options (and already can to some degree).

Or hey, maybe your top competitor just put their app on sale and are currently raking in purchases- wouldn’t that be nice to know? With App Stats, that’s something you could easily spot, even in the current beta form. App Stats is really beneficial in a wide variety of ways and those who find ways to leverage its capabilities will almost surely enjoy and appreciate the offering

I had the chance to have lunch with Michael Christoff of cloud.tv and Kevin Barry of Tesla Coil (developer of Nova Launcher) at Google IO 2013 which is when I first heard about the app. Here’s the thing: like so many other hugely successful projects, this didn’t start for the purpose of app sales or advertising revenue. The cloud.tv team wanted access to this information, they couldn’t find a good solution, so they built the app themselves.

If they need the app, isn’t it likely that many other developers are unsuccessfully looking for ways to access this exact information? Absolutely, so rather than keep it as an internal tool, they decided to make it available for download on the Google Play Store.

The best apps fill needs, cloud.tv spotted a need of their own, filled the need with a product relatively unrivaled, and boom: here comes what I believe will be a very successful app.

Please understand that this app is NOT designed for consumers, so unless you’re a developer with apps on the Google Play Store, you probably won’t care to download the app. Also remember that this is a beta product: there will be bugs, but the developers are releasing early to gather feedback, so please rate and review the app with that consideration. Their team is aware of this article so if you leave feedback below, it will be seen by the developers!

The cloud.tv team has told me App Stats will remain free while it is in Beta, but then likely move to a free and premium version, with current beta users automatically entered into a free trial (subject to change). I would honestly suggest taking advantage of the $0 price tag and complete feature set while it lasts. Then once it becomes paid, I anticipate it may have already become one of those go to tools you can’t live without, and in my mind those tools are well worth the investment.