The year is almost over (in fact, we’re less than 24 hours a way if your calendar hasn’t been working as of late) and it’s time to take a look at what the best devices of 2012 have turned out to be. There were many heavy hitters from the camps of Samsung, Motorola, HTC and more, but only five — yes, five — make the cut for Phandroid’s year-in review. Let’s dive in!

When Google completed the purchase of Motorola in 2012 it promised the company would continue to run as a separate entity for quite some time afterward. Still, it was hard to believe Google wouldn’t have any influence on the future of Motorola’s smartphone line even if that influence didn’t come right away. 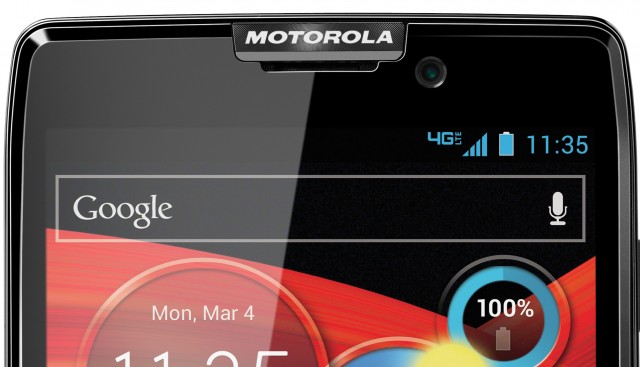 While we can’t say for sure Google had much to do with the Motorola DROID RAZR MAXX HD in body (after all, the overall package is an incremental improvement over the 2011 relaunch of the RAZR family), it does appear the company got Motorola to ease up on MOTOBLUR (or whatever they are calling it these days).

With a 4.7 inch HD display, a 1.5GHz dual-core Snapdragon Plus chipset, 1GB of RAM and Android 4.1 Jelly Bean this smartphone reads off like most high-end offerings from 2012, but some of its more unique bits give it the #7 spot on this list. Subtleties like the Kevlar backing, the device’s long-lasing 3,100mAh battery and its slim profile make it a device worthy of recognition this year. 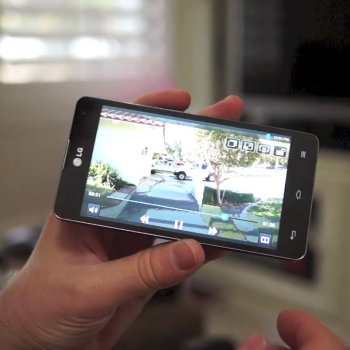 LG had to deal with some costly plunders in 2011, but the Korean OEM looked to bounce back quite nicely in 2012. One of the results of LG’s desperation (the company was losing money hand-over-first) was the LG Optimus G, a fine device if I do say so myself. It’s a quad-core monster of a phone that has Qualcomm’s Snapdragon S4 Pro and 2GB of RAM.

Despite its good looks and powerful innards, though, it’s the software improvements that earns LG’s flagship a spot on this list. Optimus UI 3.0 was a big focus of LG’s, and the time and money spent to perfect it showed up in quality form. Things like Q-Slide, QuickMemo, voice-activated controls and LG’s motion controls made it quite the significant package.

The biggest improvement was the lack of experience-breaking bugs that plagued the Optimus 2X before it, and had LG not cracked down on the software letdowns of yesteryear it might not have gotten the nod for this list. Kudos.

The original HTC One X was a great device in and of itself, but this revision completely overshadowed it. Courtesy of AT&T, it was the first Sense device here in the US that came with NVIDIA’s quad-core Tegra 3 processor as well as 4G LTE radios. It didn’t change much else over the original HTC One X, but that particular phone was already fine enough on its own merit.

This device also brought 64GB of internal storage goodness, something that’s quite unheard of in the land of Android these days. It’s something we were mightily grateful for as HTC and AT&T understood not everyone is willing to move over to the cloud, and that internal device storage is still something many of us value quite a bit.

It houses the same 8 megapixel f/2.0 BSI HD camera with an HD front-facing camera, a 4.7 inch 720p SuperLCD2 display and all the other great bells and whistles found on the original, and all of that still remains some of the best smartphone tech available today.

Ah, yes — Samsung’s mother load. The Samsung Galaxy S3 doesn’t command the top spot of this list, but perhaps that’s due to its untimely release. Samsung brought its wares out earlier in the year, and that allowed other devices (even some of their own) to outclass it in many different ways.

Still, this is one iconic device that has significantly changed the landscape of the mobile wars. It broke sales records on its way to helping Samsung become the second biggest smartphone OEM, and the biggest mobile phone OEM in all. It was the first device that really gave the iPhone a run for its money in terms of success, and we all know it was a force to be reckoned with when it came to features.

The Galaxy S3 in America housed more modest internals due to LTE-compatible Exynos chips not being ready for prime-time at the time of its launch, but the 1.5GHz dual-core Snapdragon S4 still performed quite well. The beautiful 4.7 inch Super AMOLED HD display, 2GB of RAM, 8 megapixel HD camera and 2 megapixel front-facing camera all came together to create one of the most cohesive devices you’ll ever see. Oh, and TouchWiz finally stopped sucking with this release.

Sure, it was made out of plastic and it didn’t come to most markets as a quad-core behemoth, but the Samsung Galaxy S3 was the finest phone out for the money, and it still holds its own up against more compelling offerings as we head into 2013.

The significance of the HTC DROID DNA is not lost on me — any device that can boast a 1080p display with just 5 diagonal inches to pack all those pixels into deserves a badge of honor in my book. While this may not have been the smartphone that kept HTC’s device lineup from going stale — you can thank the original HTC One X for turning that tide — it definitely pushed the company further than we thought it would be at this point.

The device also featured Qualcomm’s 1.5GHz quad-core Snapdragon S4 Pro chipset, a powerful solution that didn’t guzzle a ton of juice. 2GB of RAM, a very nice 8 megapixel camera and Verizon’s 4G LTE radios made this one of the hottest devices in the coldest of months. HTC Sense 4+ brings a very debloated suite of enhancements, and it’s one of the first times we can say that HTC Sense isn’t a total downer on top of pure Android.

What, you thought a “best phones” list would go up without a Nexus device sitting somewhere? The Samsung had a nice run with the Nexus line of phones, concluding with the Galaxy Nexus for now, but it’s time to let someone else step up to the plate. That someone else happens to be our friends at LG who left their stamp on what is known as the Nexus 4.

This device obviously gets brownie points for its lack of a custom user interface on top of pure Android 4.2 goodness, as well as for that very attractive starting price of $300. Shipping snafus aside, this is a fine device that not many can contend with this year. It has all the makings of a superphone, including the 4.8 inch HD display, 1.5GHz quad-core processor, 2GB of RAM, 8 megapixel camera, and more without the heinous costs usually associated with owning these beasts.

But even with all those juicy specs it’s worth taking time to acknowledge and admire the work that’s gone into the engineering work. LG has arguably crafted its best device ever with the Nexus 4 with the beautiful glass covering the chatoyance texture on the back, and the tapered edge-to-edge glass covering the display.

Other bits and pieces, like Qi Wireless charging, NFC, and more make it a no-brainer for our #2 spot. Even with some annoyances — like the limited storage space, lack of microSD card slot, and a non-replaceable battery — this phone was the cream of the crop for 2012.

I’ll admit it — the Samsung Galaxy Note 2 is not for everyone. That 5.5 inch HD display makes this one weird device to hold, and depending on the size of your jeans it could be hard to stuff into your pockets. Still, Samsung has concocted one of the most compelling devices we’ve seen not only this year, but ever.

Samsung took a huge gamble with the size of this device, but what it allowed them to do is quite stunning. For starters, he Wacom-enabled digitzer embedded into the display comes together with an improved S Pen to make everything — from art to natural writing — way more feasible than it’s ever been on a smartphone. The S Pen also enabled some nice productivity features, like the ability to hover over your calendar entries and email headers to see more without having to jump into them.

The bigger chassis allowed Samsung to cram a 3,100 mAh battery inside which makes for all day battery life on moderate usage. The bigger screen allows you to use two apps at the same time. No, really. And what’s all that multi-tasking without a quad-core 1.6GHz Exynos processor and 2GB of RAM to keep up with it? 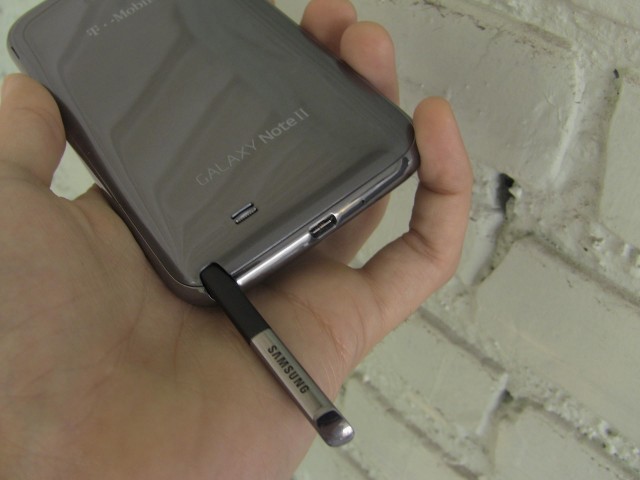 TouchWiz has never been anyone’s favorite skin — we all like pure Android around these parts — but if you had to be stuck with one OEM-made interface then you’d want it to be this. Coupled with Android 4.1 Jelly Bean Samsung has created a very functional and useful suite of tools for your pleasure.

It’s hard to think that something within Samsung’s own ranks could completely outclass the Samsung Galaxy S3, but by gosh they’ve done it. Again, this is more of a circumstance of timing than anything else. This device released much later than the Galaxy S3, so Samsung was afforded access to the latest technology to stuff inside this beast.

And the most beautiful thing is that Samsung knows all the little details still matter. People still want removable batteries, microSD card slots, et. al and Samsung delivers on that quite nicely with this package. It’s needless to say, at this point, that the Samsung Galaxy Note 2 is our top smartphone of 2012, and we’d be surprised to see many of you folks disagree.

This list is by no means definitive, of course. Be sure to chime in below and let us know what your best smartphones of the year were. Perhaps the contents of your list are the same but ordered differently? We totally want to hear about it. Leave a comment below, and let’s carry this healthy discussion into the glorious year of 2013!

more_vertAndroid 11 will most likely not be coming to

If you’re holding onto the original Pixel phone, then you might want to consider upgrading to a newer model, especially if Android 11 is an update that you are looking forward to.