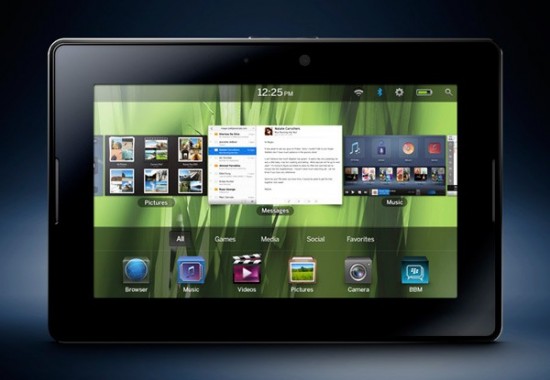 When the rumors began swirling that RIM was cooking up support for Android apps in their upcoming BlackBerry Playbook (and possibly future smartphones), most thought the idea a bit too out there to be true. Well, read it and weep (or rejoice): Android app support has officially been announced for the PlayBook tablet, which is set for an April 19th release.

A “high degree of API compatibility” will make it easy for Android developers to quickly port their applications to the PlayBook, though it appears they will still need to be uploaded and accessed from BlackBerry App World. Once downloaded, apps will run via one of two optional “app players.”

The implications of this could make or break RIM’s new tablet. Android currently has access to right around 200,000 applications (give or take 50,000, depending on who you ask), and if developers choose to do so these additional apps could sway more than a few buyers in BlackBerry’s direction. No word on how Google views the move, but it seems RIM has sidestepped some heat by at least requiring developers to modify their applications before they are BlackBerry capable.

Developers wanting to bring their new and existing apps to the highly anticipated BlackBerry(R) PlayBook(TM) tablet will soon have additional tools and options to enhance and expand their commercial opportunities. Research In Motion (RIM) (NASDAQ:RIMM)(TSX:RIM) today announced plans to greatly expand the application ecosystem for the BlackBerry PlayBook. The BlackBerry PlayBook is scheduled to launch in the U.S. and Canada on April 19.

“The BlackBerry PlayBook is an amazing tablet. The power that we have embedded creates one of the most compelling app experiences available in a mobile computing device today,” said Mike Lazaridis, President and Co-CEO at Research In Motion. “The upcoming addition of BlackBerry Java and Android apps for the BlackBerry PlayBook on BlackBerry App World will provide our users with an even greater choice of apps and will also showcase the versatility of the platform.”

The BlackBerry PlayBook and BlackBerry Tablet OS are built on the QNX(R) Neutrino(R) microkernel architecture with a 1GHz dual core processor and a leading OpenGL solution, which allows RIM to make this incredibly broad platform support possible.

BlackBerry PlayBook users and developers who are interested in seeing the new app players for BlackBerry Java and Android apps can see demos at BlackBerry World in Orlando, Florida (May 3 to 5, 2011) (www.blackberryworld.com).

Other features of the BlackBerry Tablet OS NDK will allow developers to:

“The response to the BlackBerry PlayBook from the developer community has been exceptional. Our commitment to supporting HTML5 and Adobe AIR development has resonated and spurred developers to create fun and innovative applications for BlackBerry PlayBook users,” said David Yach, Chief Technology Officer, Software at Research In Motion. “The upcoming BlackBerry Tablet OS NDK beta will add C/C++ tools to our repertoire and gives developers one of the broadest and deepest platforms to develop on.”

The Ideaworks Labs Airplay SDK is expected to include support for the BlackBerry Tablet OS soon, making it easy for publishers and developers to use their existing code to bring their games and apps to the BlackBerry PlayBook.

“Supporting a new OS can be a challenge for developers,” says Alex Caccia, President of Ideaworks Labs, “however, integration of the BlackBerry Tablet OS with the Airplay SDK makes this a non-issue. We think this is a far-sighted move by RIM: the BlackBerry PlayBook is a great device for games and applications, and combining this with content distribution via BlackBerry App World brings an exciting new ecosystem for developers.”

RIM has also been working closely with Unity Technologies, providers of the highly popular, multi-platform Unity development platform and Union, the firm’s games distribution service. Through Union, dozens of high-quality Unity-authored games are slated to make their way to BlackBerry App World for the BlackBerry Playbook.

“With a sharp focus on the multimedia experience, very powerful hardware, and fantastic games in the pipeline, the BlackBerry Playbook has all the right ingredients to be a mainstream hit,” said Brett Seyler, GM of Union at Unity Technologies. “Through Union, Unity developers have an opportunity to reach a new audience and grow with another great new platform.”

Visit the BlackBerry Developer Zone at www.blackberry.com/developers for the latest news, information and updates for BlackBerry developers.

Visit the BlackBerry Developer Video Library at www.blackberry.com/go/developervideolibrary to view a variety of instructional videos.

Sign up for the BlackBerry Developer Newsletter at http://na.blackberry.com/eng/developers/resources/newsletter.jsp.

For the latest news and information about the BlackBerry Developer Conference visit www.blackberrydeveloperconference.com.