nook eReader by Barnes & Noble is Android Based!

A bunch of eReaders have come out in recent days and weeks but NONE of them were the rumored Barnes & Noble eReader until today when the company announced the Nook. Combine that with “eReader” or “eBook” and you have the problem of hearing someone say “Nookie Book” or “Nookie Reader”. But more importantly, the phone is based on the Android operating system.

How do we know? Barnes & Noble said so themselves in comparing the Nook to the Kindle (scroll down to “Other Features”): 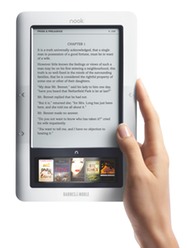 Yesterday we totally number two-ed on an eReader called “Alex” for clumsily including a second screen. We liked the enTourage eDGe a little more. But as you can see on the left, Barnes & Noble got it best/right by implementing a convenient way to flip through book covers with a horizontal LCD panel below the main screen. Judging a book by its cover? LOVE IT!

And there is a crazy twist: you can lend a nook book to a friend and they’ll be able to use/read it for up to 14 days! So for book lovers who read fast and can finish a book in a day… I hope you all make a lot of nook book friends! They don’t HAVE to have a nook, it will also work on the B&E e-reader software/app for PCs, Macs, iPhone, Moto phones and BlackBerries. Oh… and we’re guessing Android too.

The Nook will go on sale for $259 at the end of November, just in time for you to wrap it and give it to whoever the book reader in your life happens to be!