Huawei has been known for delivering great smartphones, but the company’s also been focusing on smartwatches and Bluetooth headphones as of late, quickly becoming a force to be reckoned with, especially when it comes to true wireless earbuds.

The new Freebuds Pro are no exception, packing in incredible noise cancellation, great audio and decent battery life for just 199 Euro, undercutting its main competitor by a significant amount. 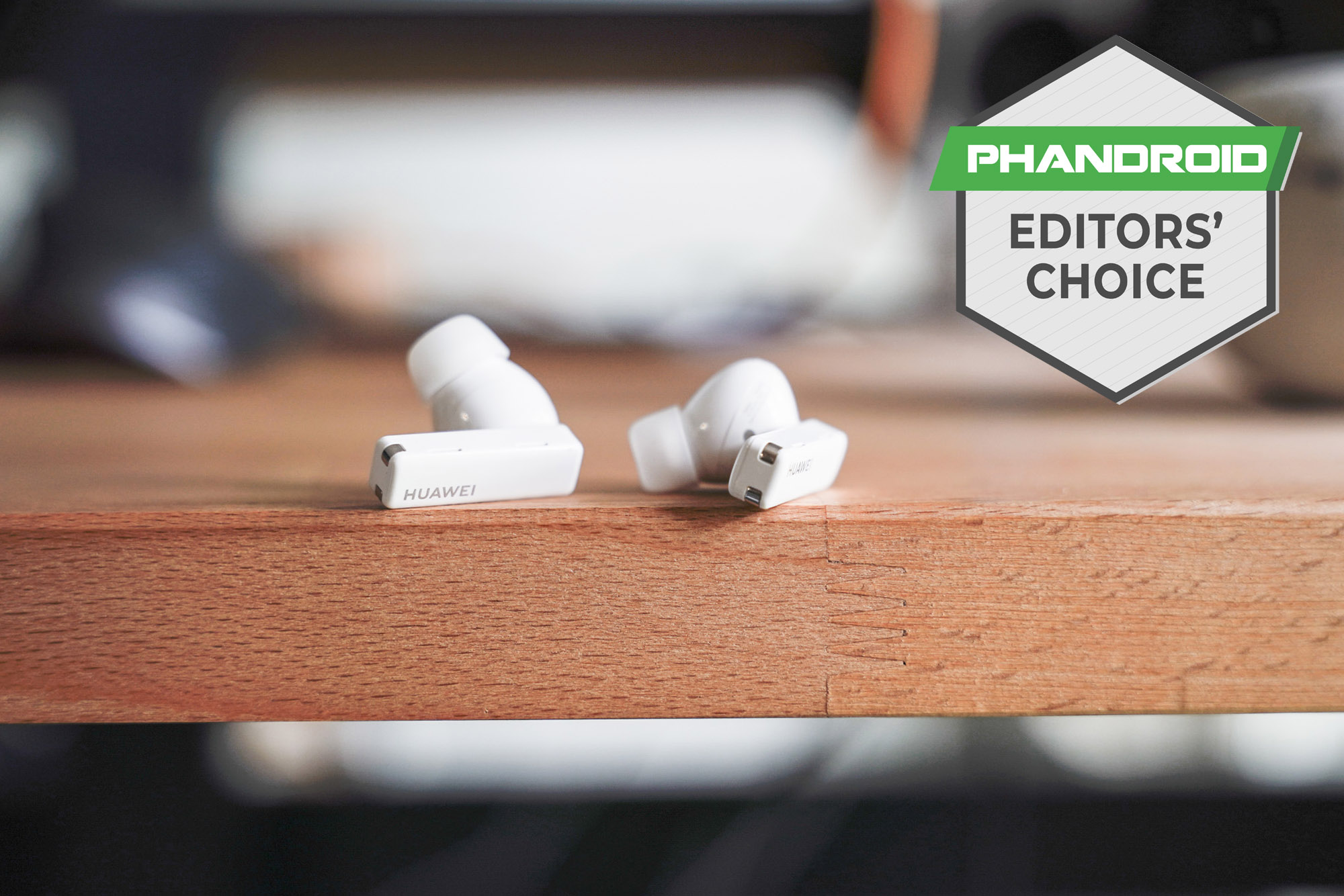 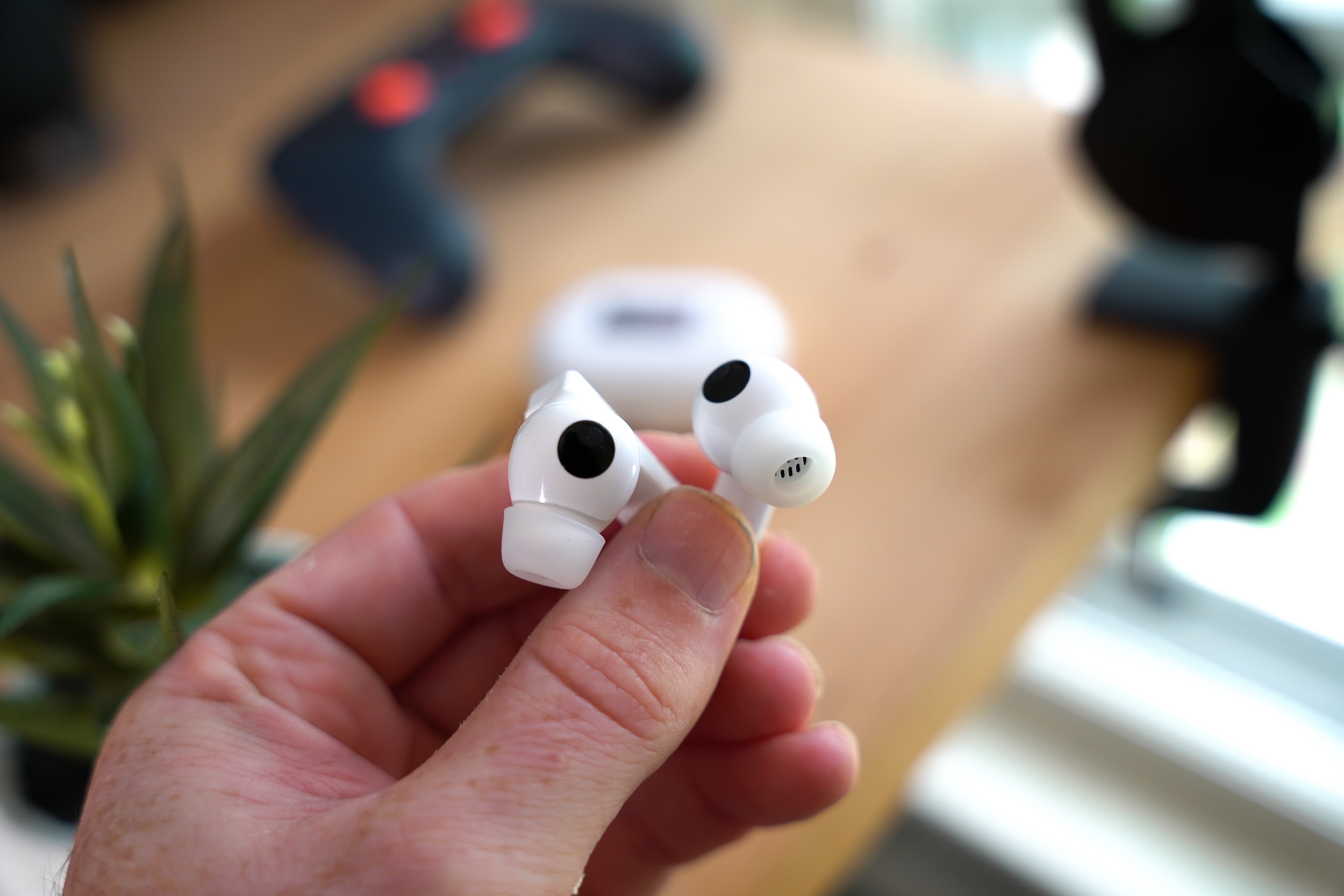 The first thing you’ll notice when you unbox the FreeBuds Pro is that they’re sticking to the bud and stem design that they’ve been playing around with for a while now. The difference here is that the stem has been squared off and a bit shorter than what we saw on the FreeBuds 3 from last year. While this doesn’t sound like it’s a significant change, the new look makes the earbuds stand out just a little bit more, as does the new Silver Frost color option. Unfortunately, Huawei sent me the White ones, but they still look really good and the glossy finish allows for easy cleaning.

The stems also house the various touch controls for the earbuds. Swiping up or down will control the volume, a single pinch will play or pause your music or answer or end a call, double pinch skips to the next song or rejects a call and a triple pinch, if you can get it timed just right will jump back to the previous song. That last one you’ll likely need to do twice if the song you’re listening to has been playing for more than a few seconds.

Huawei has also added pinch and hold functionality to cycle through the different noise cancellation options and trigger your voice assistant. These settings can also be customized in the app so you can choose what happens when you pinch and hold the left or the right earbud.

The swipes and pinches work quite well, but they can be a bit touchy. I’ve accidentally switched noise cancellation off or messed with the volume when I’m simply trying to adjust the buds in my ear.

The charging case is well built with magnets used to pull the buds into place, but there’s a downside here. Those same magnets make it a little hard to pull the FreeBuds Pro out of the case if you don’t have a good grip on them or if your fingers happen to be greasy or sweaty. It’s not a huge issue, but Huawei could have gotten around this by notching out the area inside the case a bit so that you can easily get your fingers around the buds for a solid grip. 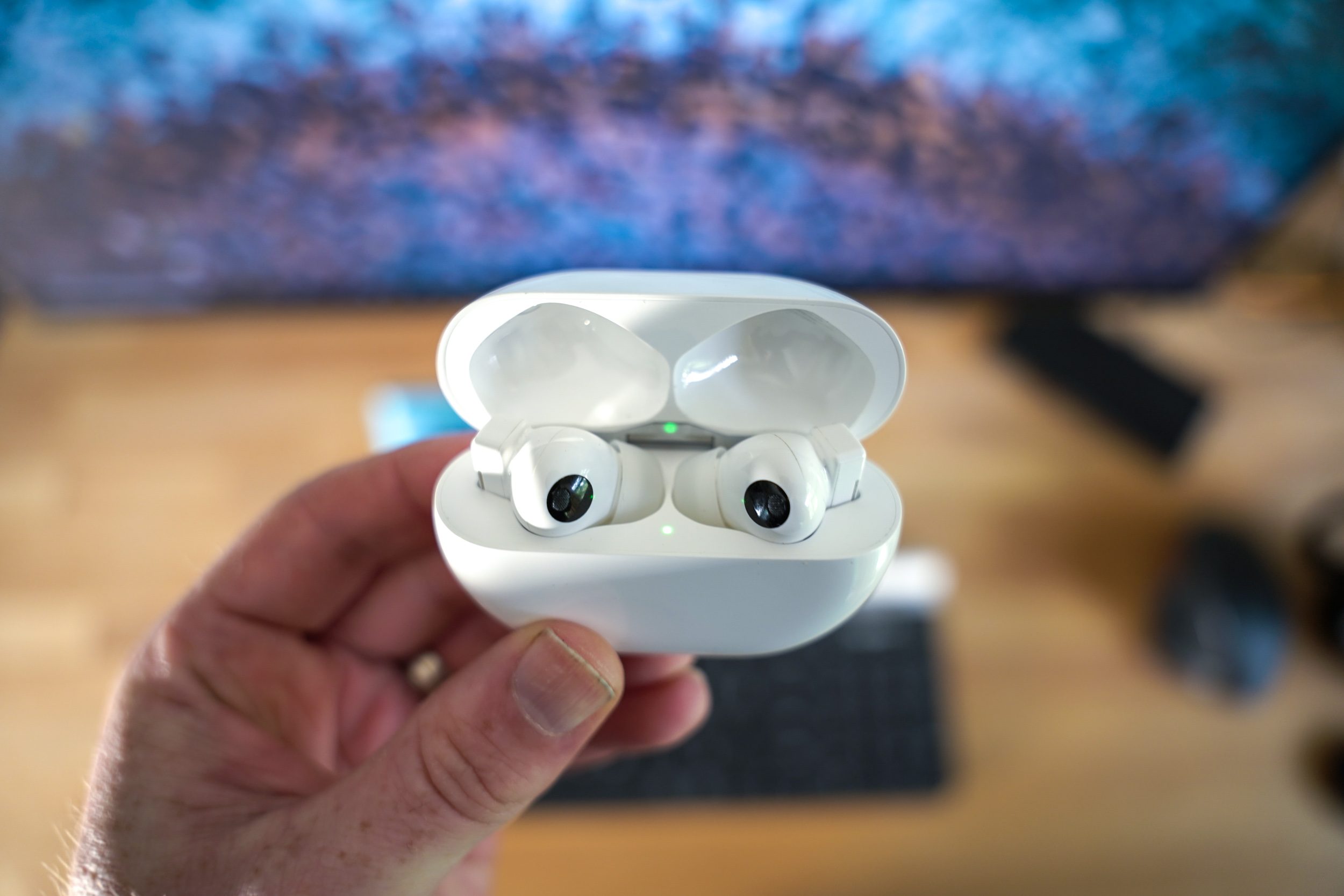 Huawei is also one of the first to use Bluetooth 5.2 to transmit audio from your phone to the earbuds. In addition to lower power consumption, Bluetooth 5.2 also allows for a reduction in latency which should help most while gaming since video apps usually are able to sync the video stream to match the audio playback. Unfortunately, there really aren’t any phones to test it out on right now, but we should start seeing Bluetooth 5.2 pop up in new devices later this year and in early 2021. The latency issue still won’t be perfect, but you should hear a noticeable improvement when compared to other earbuds with Bluetooth 5.1.

Besides a one-off audio sync issue between the two different buds, I’ve had great connectivity with the FreeBuds Pro. I can leave my phone in my office and walk down to the second level of my house and maintain a perfect connection. Typically, I can get up to 75 feet away from the audio source before things start to cut out and I have not had a single issue with cross-body interference which is common when you’re listening to audio with your phone in your front or back pocket.

The earbuds can also connect to two devices simultaneously. This is extremely convenient if you’re doing work on your laptop and get a phone call since you don’t need to manually switch back and forth between the two devices. Just keep in mind that if you have shared devices in the house that you’ve connected the FreeBuds Pro to, you could be suddenly inundated with an audio feed you weren’t expecting. This happened to me a few weeks back while I was using them while I was a guest on the PocketNow weekly podcast. 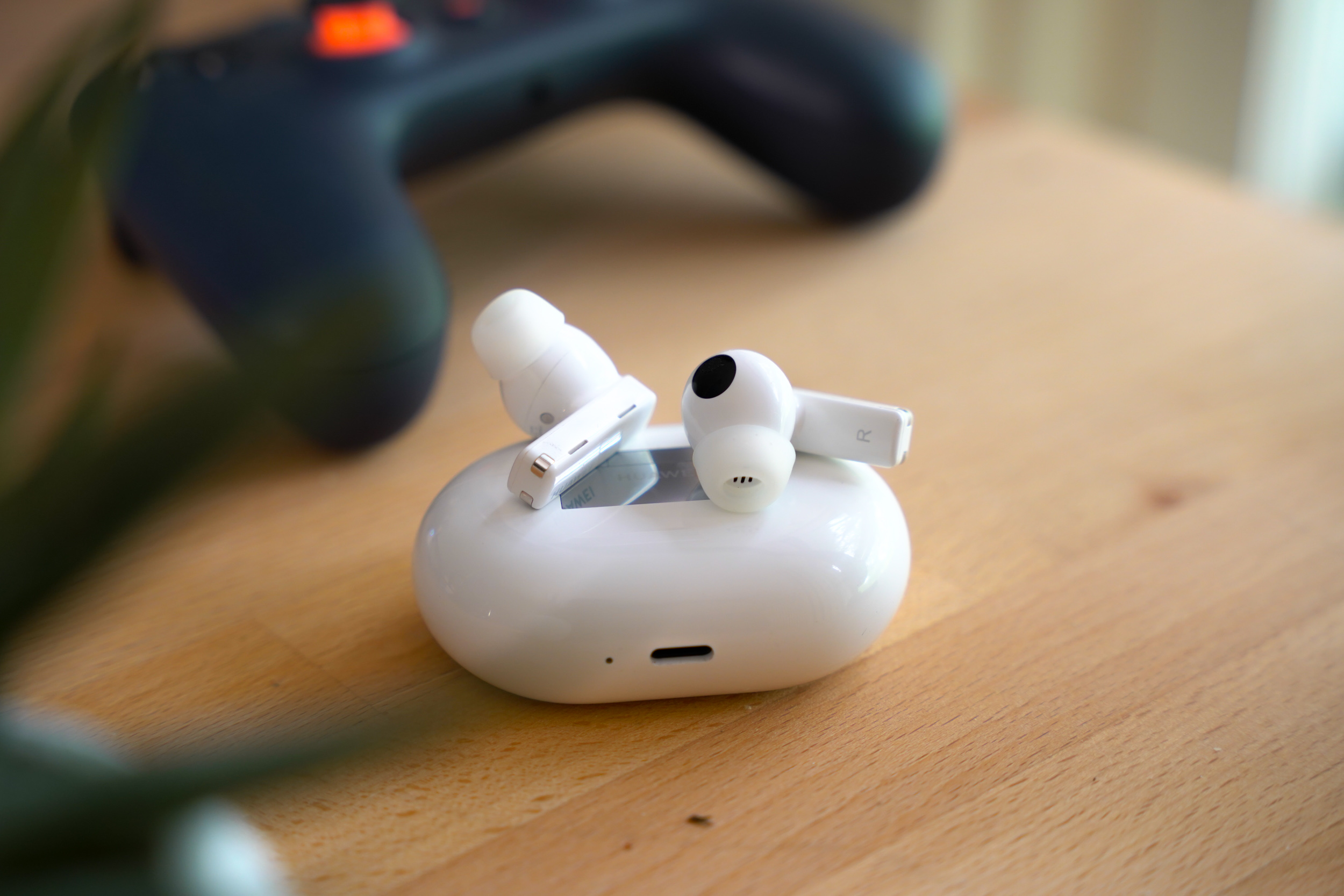 Now, this isn’t the first time Huawei’s tried its hand at delivering noise cancellation in this form factor. Last year’s FreeBuds 3 offered it as well, but the choice not to give those buds a sealed design meant that the effect was minimal. The Freebuds 3i improved on the formula a little bit with silicon tips that sealed off the ear canal a lot better, resulting in 32 dB on noise reduction, but now with the FreeBuds Pro, they’ve taken noise cancellation to a phone new level, managing to block a full 40dB of outside noise from getting to your eardrum.

It’s truly surprising how well the noise cancellation truly works. I don’t have any way of verifying Huawei’s 40dB of noise cancellation claim, but I can say that they are on par with my Sony WF-1000XM3 true wireless earbuds which up until now has been the leader in the space.

The earbuds also offer a dynamic noise cancellation option that will analyze the noise around you and adjust accordingly or you can manually choose between the Cozy, General, and Ultra options. Most of the time I had things set at General which is a good balance, still allowing some noise through, but if you’re on a plane or happen to be sitting next to an air conditioner, the Ultra mode will do the trick, cutting out a lot more noise than you’d expect.

And of course, they’ve also added an awareness mode that will pump audio through so that you can have a conversation with someone without needing to pull the buds out of your ears. 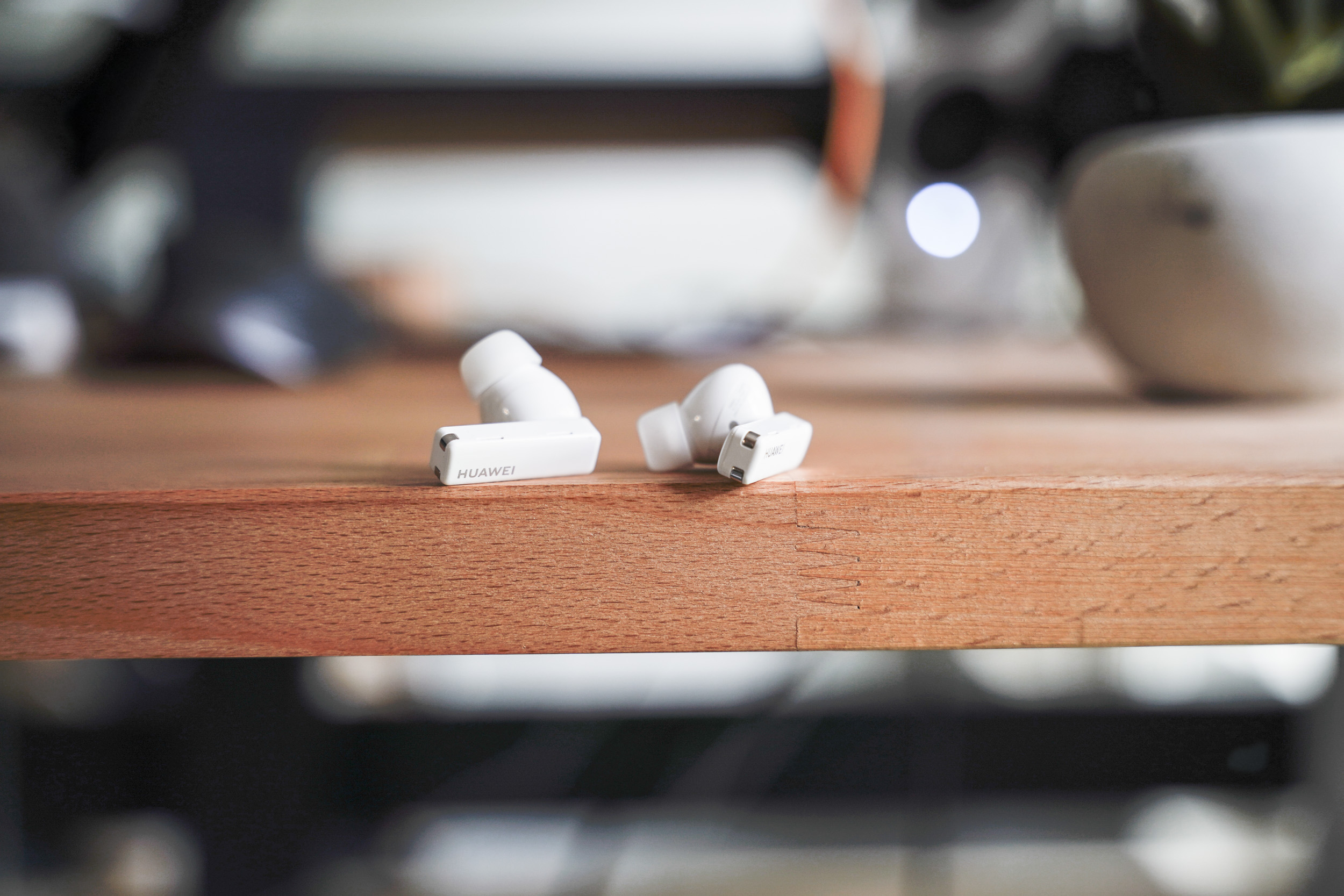 When it comes to audio quality, the FreeBuds Pro deliver a well-balanced sound stage. The audio experience is great, with rich highs and adequate bass that doesn’t overwhelm the music. The 11mm dynamic drivers aren’t particularly large, but they still get quite loud, and even at maximum volume, the Freebuds Pro delivers exceptional clarity. Since I’ve already compared these to the Sony – WF-1000XM3’s, I’ll say that they’re a half step behind when it comes to audio fidelity, but that’s still a very high compliment for Huawei since they haven’t been doing this for too long.

For calling, Huawei uses three different microphones on each bud to help isolate your voice from the background noise. What you’re hearing right now is audio recorded with the FreeBuds Pro, which I honestly think is a huge improvement over the internal mics on most smartphones which makes these a great option for phone and video calls and even if you’re recording video if you’re the main one speaking. You also get an anti-wind filter built in which I have to say works pretty well.

The silicon tips do a great job sealing the ear canal and securing the buds in place. There are three different sizes to choose from which should allow most people to find the size that works best for them. I had no issues with the FreeBuds Pro staying in place while wearing them in the office with only the occasional adjustment. There’s no official IP rating for sweat resistance, but I did test them out on a few 3-mile runs and didn’t have any issues there, but I did need to fiddle with them a handful of times to make sure they didn’t fall out. If your cycle or typically performs more stationary workouts, you should be just fine even though they’re not specifically built for working out. 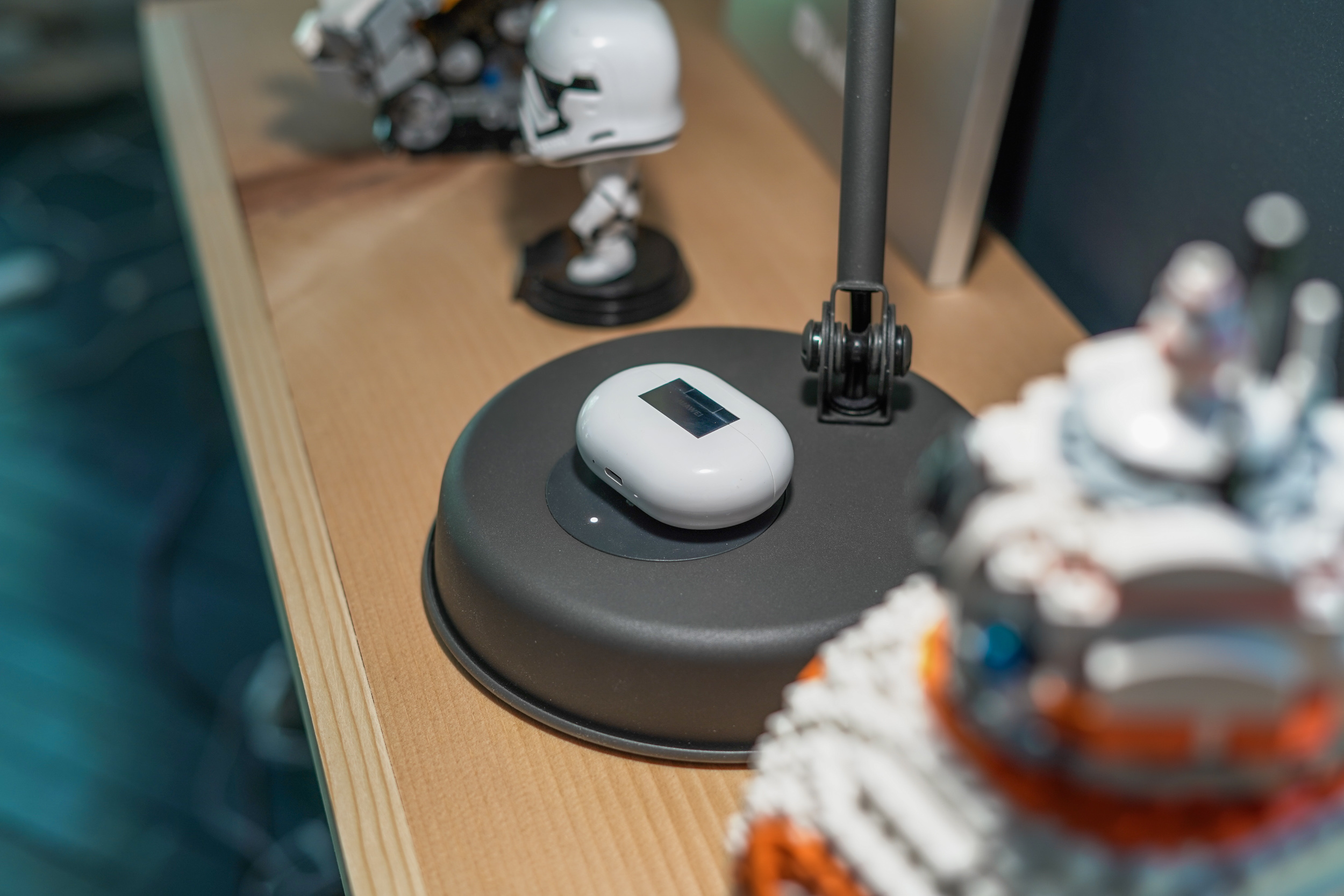 At 4 hours, the battery life on the FreeBuds Pro is good when the noise cancellation is turned on, but if you switch it off, you’ll see a significant jump up to 7 and a half to 8 hours on a single charge. You can essentially wear them through an entire workday without taking them out.

It’ll take about an hour to fully charge the earbuds, but popping them back into the case for 10 minutes will give you about an hour of additional listening time.

The case itself will deliver an additional 3-4 charges and takes a little over an hour to charge over USB-C. But since this is a premium product, Huawei’s throwing in Qi wireless charging as well which means you can just plop it down on any old QI charger you have in the house or even use the reverse wireless charging feature that many flagship phones have these days.

The magnets do a great job folding the buds security in the case with a satisfying clunk when you place them in, but there’s a downside here. Those same magnets make it a little hard to pull the FreeBuds Pro out of the case if you don’t have a good grip on them or if your fingers happen to be greasy or sweaty. It’s not a huge issue, but Huawei could have gotten around this by notching out the area inside the case a bit so that you can easily get your fingers around the buds for a solid grip.

As the look and features of these earbuds imply, the closest competitor would be Apple’s Airpod Pro. In most respects, they are comparable, but where Huawei truly has Apple beat is the price. The FreeBuds Pro comes in at 199 Euro while Apple’s sell for 279 euros, making Huawei’s earbuds the far better option, especially if you’re an Android user.

With so many true wireless earbuds options these days, Huawei has been working overtime to ensure that its earbuds are as good if not better than the competitions. The FreeBuds Pro aren’t perfect, but they’re a lot better than the vast majority of earbuds we’ve used lately and are definitely an option worth considering if you’re looking for great battery life, good audio, and active noise cancellation without the steep price tag that typically comes along with those features.