One of the few surprises of CES 2020 for me was the Samsung Galaxy Chromebook, I’ll freely concede it isn’t a groundbreaking new innovation, but it is a step forward for Chromebooks that I didn’t expect out of anyone other than Google.

The $999 starting price was the attention grabber for most people as we have settled into Chromebook pricing reliably falling into the $250-$500 range. Doubling to quadrupling that is naturally going to raise some eyebrows, but a cursory reading of the spec sheet will tell you that Samsung has priced it reasonably. And after 30 minutes spent working with the Galaxy Chromebook it feels like it could be worth the asking price and was enough to earn one of our Best of CES 2020 awards. 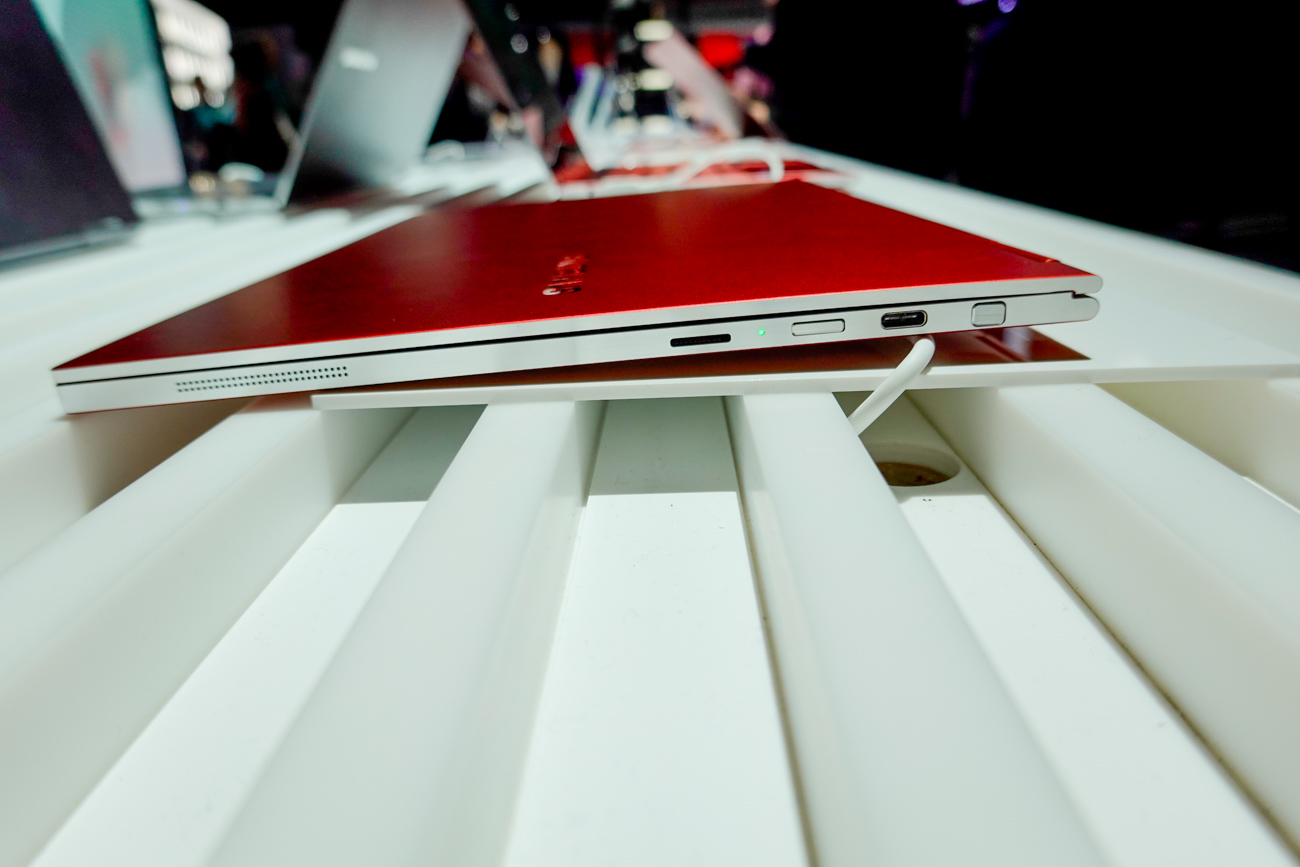 Let’s start with the screen, which in the default $999 configuration is still a 13.3-inch 4K UHD AMOLED touchscreen display. That’s $400 less than the Pixelbook Go’s 4K (not AMOLED) option, which is the only real high-end competition for comparison at the moment.

In person the screen looks fantastic, while the show floor at CES isn’t exactly an optimal viewing environment, I watched a number of snippets from 4K videos on YouTube and the colors are incredibly vibrant and the image was consistently crisp. The 16:9 format of the screen isn’t to everyone’s preference for productivity, but for watching content this Chromebook is going to be tough to beat.

Being able to fold your Chromebook into a tablet has been a nice little extra, but for the most part, they are ridiculously large in this form factor and uncomfortable to use. The Galaxy Chromebook is the first Chromebook that nails the tablet experience, it could easily replace the need for a separate tablet for most people. A lot of this is thanks to the thin and rigid aluminum frame of the Galaxy Chromebook, with the screen folded flat it’s just 9.9mm thick, which basically feels like a tablet with a case on it. 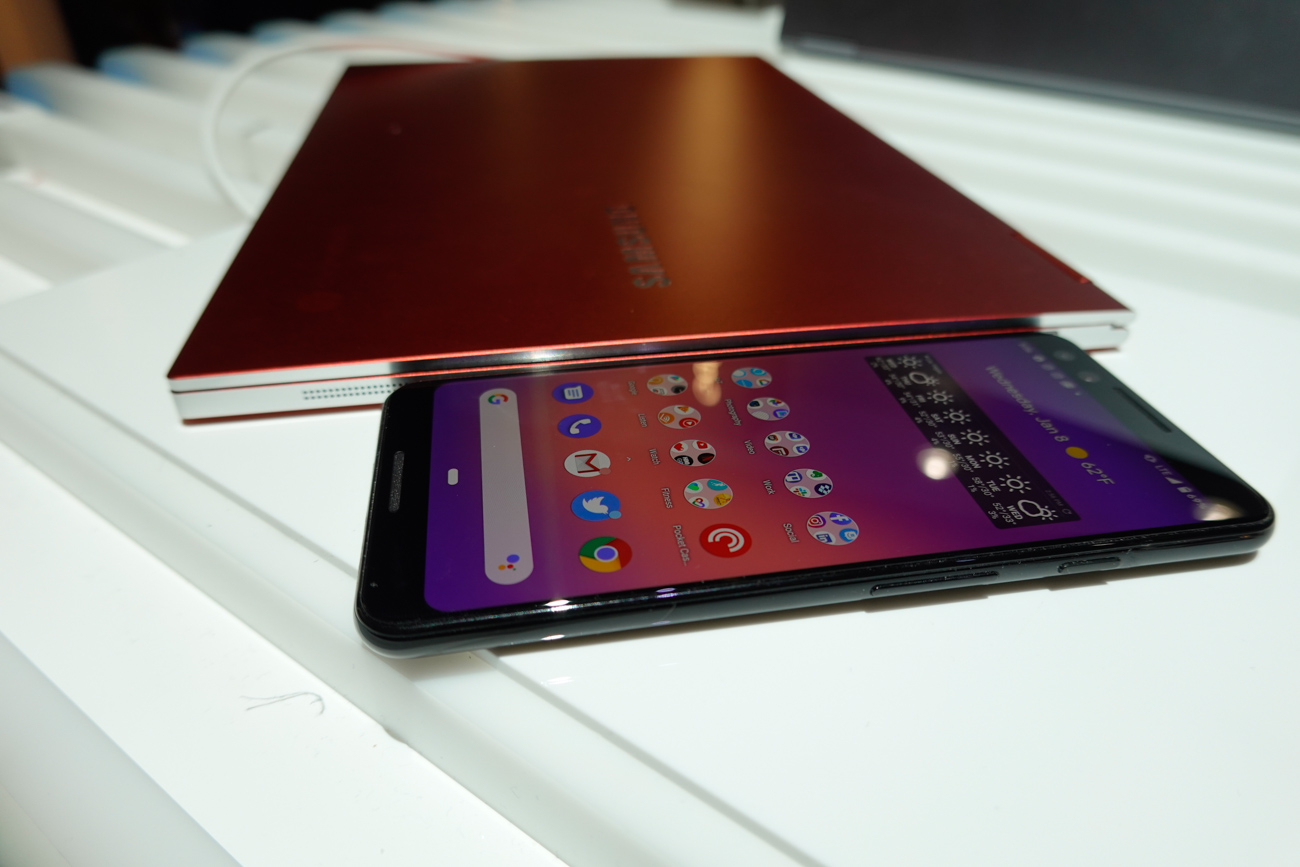 I spent some time playing Android games with it in tablet mode and they all ran smoothly of course on the core i5 processor. But mainly I simply noticed that it felt natural to hold it in tablet mode and play a game, normally when testing this kind of a thing on a Chromebook I absolutely feel like I’m holding a laptop in my hands.

Also on the tablet front, the included stylus looks virtually identical to the S-Pen, but Note fans will be disappointed to find that it lacks any of the advanced features of the S Pen. There are no buttons and no other functionality beyond a simple stylus. With that said using it to write on the screen was a perfectly pleasant experience and the pop-out mechanism works well, precisely as it does on a Note and for fidgeters, it makes a very satisfying clicking sound.

Cameras are another interesting aspect of the Galaxy Chromebook, there’s a small 1MP camera in the standard location at the top of the display, but just above the keyboard, there is an 8MP camera. Again Samsung is hitting the right marks with making the Galaxy Chromebook a viable tablet alternative with content creation and capture in mind. 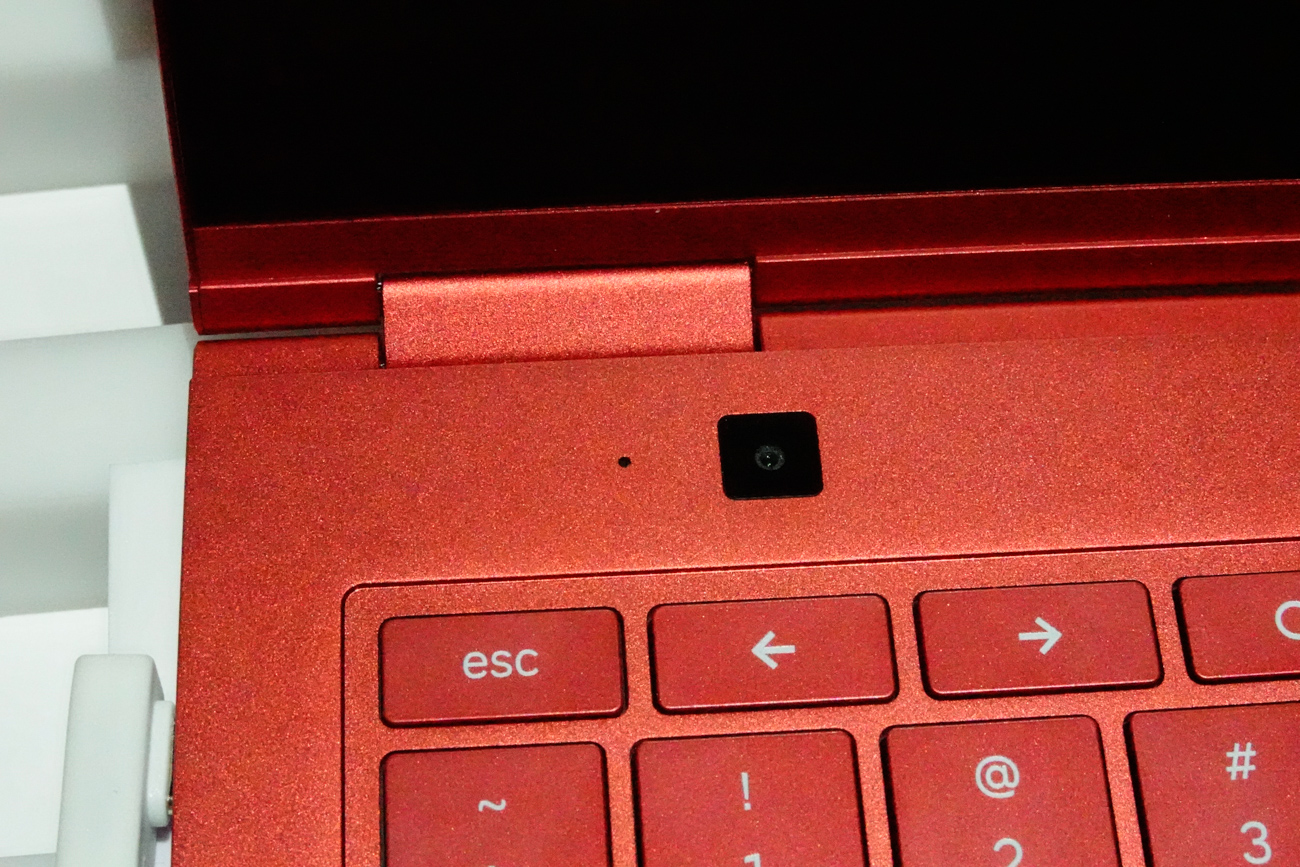 Finally returning to the Galaxy Chromebook as a laptop, the keyboard has the same metallic feel as the rest of the device and has fairly short travel. I had no difficulties hitting my standard typing speeds on it, but I did until very recently use a 2017 MacBook Pro which had minimal travel (when it worked at all) so my judgment may be slightly off.

My concerns with the typing experience aren’t the keyboard actually, but rather the hinge of the laptop. It couldn’t hold up to rapid typing even on a solid surface without some wobble. There was no seating to test out typing with it in my lap, but I have to imagine it would be virtually unbearable.

I’m really hoping Samsung manages to find a way to strengthen the hinge in the final hardware as this would be a significant flaw in an otherwise amazing Chromebook.

I suspect this won’t be the last high-end Chromebook we see announced in 2020, I think there is finally a market there to go after. We’ve seen Chromebooks absolutely dominate education over the last several years and it stands to reason that there should be better hardware for kids that started grade school with Chromebooks to graduate to as they move on. That’s not to mention the professional or simply home users for whom Chrome OS in its current iteration can certainly handle all of their daily needs.

The simplicity of Chrome OS paired with quality hardware could open up the market that Apple once owned and the Samsung Galaxy Chromebook certainly provides a vision of what that will look like.