Android 5.1.1 for smartwatches has been out for a little while now, but Motorola took some extra time to make sure it was ready for the Motorola Moto 360. It’s finally rolling out now. This might be the biggest update Android Wear has seen to date. There are many new features and improvements that make the whole experience feel much more mature. Let’s take a look at some of the best new things.

When Android Wear was brand new a lot of people thought it was missing an app launcher. There were a few different 3rd-party solutions, but it never felt like they belonged on Android Wear. Google has introduced an app launcher in Android 5.1 that feels much better. You can tap the watch face or swipe to the left to bring up a list of apps (the most recent are displayed on top).

The launcher is not just for apps. It’s actually made up of three pages: apps, contacts, and search. The first page shows the list of apps, but swipe again and you’ll see some commonly contacted people from your contacts. Tap on a person and you can send them a message. Swipe over once more and you’ll see the Google voice search page that used to pop up when tapping the watch face.

Use the watch without your phone 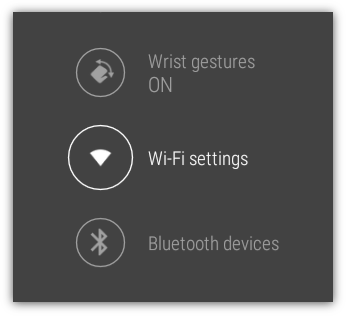 Android 5.1 adds WiFi connectivity to supported smartwatches. The Moto 360 happens to be one of the devices that can use this feature. You can connect your watch to a WiFi network and use it without being connected to your phone. Notifications and voice searches will still work on the watch. This feature is not intended to replace your phone completely, but it’s nice for those times when your phone disconnects.

Lock your watch when it’s not on your wrist

Phones are full of personal data and information, which is why there are so many different security methods we can use. Smartwatches don’t typically store much personal data, so we haven’t really thought about how to secure them. Google has introduced a new feature called “screen lock” that should help the situation.

In the settings you can create a pattern password like you would on any Android phone. The idea is that when your watch detects the absence of motion, like if it’s charging on a desk, the screen lock will automatically engage. Unfortunately, I haven’t been able to get this to work. You can also instantly turn on the screen lock from the settings.

One of the coolest new features in Android 5.1 is the ability to draw emoji. When you tap “Reply” to a message you can scroll down to see a new option for “Draw emoji.” It basically works like handwriting recognition, only instead of letters you’re drawing emoji.

Draw a smiley face and it will give you the smiley face emoji. Draw a weird squiggle and you might get the poop emoji. Some of the more intricate emoji are harder to draw, but it’s still fun. You can also simply choose emoji from a list if you don’t feel like drawing.

In previous versions of Android Wear it was nearly impossible to use apps for any extended period of time. Once the screen turned off it would close anything you were doing and go back to the watch face. This was really annoying if you were trying to cross things off a list, or browse an app. Android 5.1 fixes this problem.

Apps can now run in ambient mode (or “Always on”) if developers support it, which means they stay visible on the screen when it turns to black and white. If you don’t use ambient mode the app will still be in the foreground even if the display turns off. The best example of this right now is Google Keep.

Android 5.1 is a much-needed update, and it has breathed life back into the Moto 360. All of these new features and improvements make for a much more polished experience. How has your experience with Android 5.1 on smartwatches been so far? Which device do you own? Check out the Android Wear section of AndroidForums.com for more about Android 5.1.1.