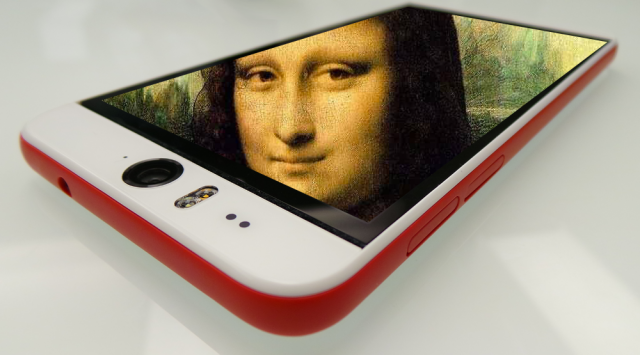 “Watch out, Mona Lisa… you’ve got some competition.”

HTC has been studying consumer behavior and they’ve noticed something about you: you’ve been taking an awful lot of selfies. Unfortunately, even on today’s newest flagship phones, front facing cameras are severely limited in capabilities compared to their rear facing counterparts. The megapixels are usually capped at about 5, there’s no flash, lowlight quality is hideous, and unless you’re in the most amiable of photographic conditions the final product is often mediocre at best. Why should consumers have to make such a huge compromise on an activity that takes up a good portion of their phone’s use?

According to HTC product managers, you shouldn’t have to compromise. And with the newly announced HTC Desire EYE smartphone, you won’t have to: it makes selfie compromising a thing of the past by stuffing two 13MP cameras into the device (one front and one rear). It doesn’t stop there, though: both front and rear cameras have dual LED flash.

That’s right. The HTC Desire Eye has a 13MP front facing camera with Dual LED Flash. Watch out, Mona Lisa… you’ve got some competition. Beautiful 13MP selfie-galore is on the way.

In case you’re wondering, the 22mm equivalent vs the 28mm equivalent is deliberate decision that will help capture more people in one photo by having a wider field of view.

Putting such a powerful camera on the front of a smartphone is a pleasant departure from the norm, but the Desire Eye doesn’t only aim at being a camera beast in the hardware department. HTC is investing a lot of time and energy into creating a more complete photography experience that includes software features and services, too.

Some simple ones you’ll find both familiar and helpful:

The most gimmicky feature might be my favorite: it’s called “crop me in” but it would more appropriately be named “photobomb”. As you can probably guess it cuts you out of a selfie, then allowing you to insert yourself in another picture. Our friends on Google+ might be reminded of a similar featured from a few months back when David Hasselhoff photobombed everyone auto-awesome style for April Fools.

These features (and more) will debut with the Desire Eye as part of the “Eye Experience” but they’re indicative of a bigger HTC shift towards enabling consumer tech experiences beyond traditional smartphones. You should not only expect the Eye Experience to roll out to other HTC smartphones, but also other devices (both Android and iOS) and other product categories. HTC seems set on identifying and fulfilling unmet needs, something the Desire Eye certainly achieves.

One piece of software that illustrates this shift is HTC’s Zoe camera. In addition to becoming compatible with all Android devices with Android 4.3 and up, HTC will also offer an iOS client starting next year.

What’s new in Zoe camera on the Desire Eye? It’s got a collaborative feature that could be pretty impressive. We’ve seen phone manufacturers and social networks explore the concept of grouping together media by location and relationships and automatically generating highlight reels; now HTC is bringing similar functionality to Zoe. Imagine friends at a baseball game all pooling their resources together, all easily able to gain access to eachother’s pics and mash their collective media into a short, compelling clip that tells a story. And get this: you can collaborate with an unlimited number of people, including strangers.

One small addition that Instagrammers will appreciate is the ability to automatically share to Instagram, something that’s been missed in Zoe to date.

What about Boom Sound?

My first reaction to seeing the “we don’t compromise” 13MP front camera was, “but what about Boom Sound”? It was (and still is) one of my favorite features on the HTC One M8 (among other devices). Given the engineering required to pack the camera tech into that tiny frame and seeing the absence of the huge speaker grills, I assumed Boom Sound was the compromise. 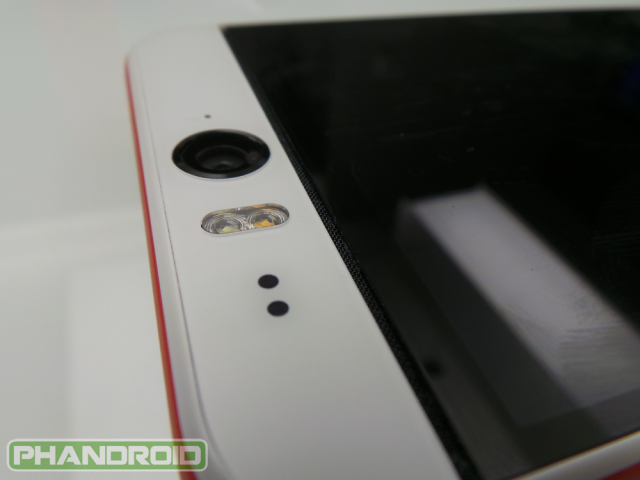 That was not the case: smaller speaker grills, yes, but Boom Sound is alive and well on the top and bottom of the HTC Desire Eye. Cranking the volume up still yields beautifully crisp, clear, and loud audio. Yahtzee!

The Desire Eye was manufactured with a shock injection molding process that creates a device with:

Structural integrity has been a hot topic lately, so you’ll feel safe knowing that the Desire Eye “won’t warp and creek” from regular wear and tear or create gaps and crevices over time that will catch hair and dust and other unpleasant things. And no, this is not a warrant or license to start trying to bend it in half like an idiot.

Perhaps the most disappointing feature of the HTC Desire Eye is that – at least for now – it’s an AT&T exclusive. Pricing and availability remain to be seen, but HTC representatives described it as the “flagship of the Desire phones” which means considerably more affordable than the HTC One M8 but the most expensive of the Desire phones.

At the moment the only secondary color for the Desire Eye will be the red pictured above but, if we had to guess, other colors will soon follow-namely blue and white. Expect the phone to launch in time for the holidays. 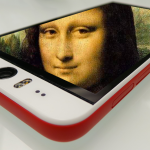 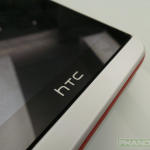 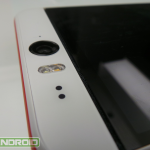 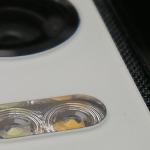 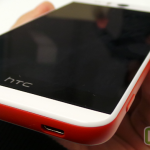 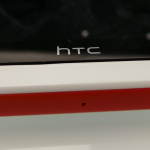 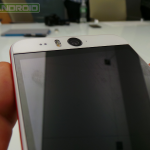 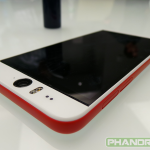 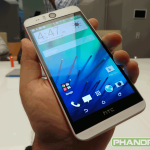 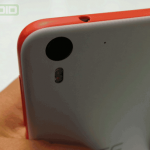 Questions about the Desire Eye? Planning on getting one? Can’t decide? Head on over to our HTC Desire Eye Forums to discuss with other Android enthusiasts, courtesy of Android Forums.

There you have it, the HTC selfie machine makes no compromises. But be warned: avoiding compromising selfies themselvies is still up to yousies.