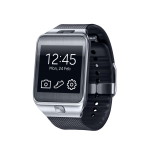 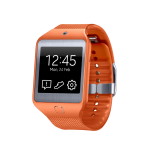 While gaudy processor and RAM specs don’t quite have the same importance for smart watches as they do phones, it’s still important. The Galaxy Gear 2 slightly improves on the original with the following suite of silicon:

And that’s the gist of it. It’s actually pretty advanced under the hood for a smart watch. So what else is new compared to the original? For starters, the camera is now part of the watch body instead of the strap, making way for interchangeable wrist bands. Samsung says those will be available in Charcoal Black, Gold Brown and Wild Orange. You’ll also be able to customize your home-screen backgrounds, watch faces and fonts.

Another big deal is the fact that Samsung’s smart watch platform is no longer based on Android — it’s all Tizen, baby. We’re not sure what this will eventually mean in terms of third party development and apps. It’s also worth noting that Samsung is still making these things a Galaxy-only affair, so don’t even bother if you don’t have some of their latest smartphones.

Specs, features and whatnot? All of the above, sans the camera. It’s literally the same watch otherwise, though Samsung is looking to offer up a slightly different suite of interchangeable wrist straps. They’ll be available in Charcoal Black, Mocha Gray, and Wild Orange.

No information on how much dough this’ll run you just yet, but we imagine Samsung will look to get back to that uncomfortable $300 price tag for the base model. The Neo is expected to cost a bit less, though we’re not sure how significant of a difference we’ll be seeing. Samsung says we should be seeing both launch worldwide starting this April.