LG D821 is the Nexus 5 for Brazil – Could Google be planning a worldwide release?

You may remember last week when a pair of LG devices sharing very similar model numbers caused a bit of a mixup involving which was the purported Nexus 5, and which was simply an LG G2.

First, the LG D820 (alleged Nexus 5) passed through the FCC sporting AT&T/T-Mobile/Sprint bands. The filing revealed so much information (including images), we were near-certain the device was the one and only Google Nexus. It wasn’t too long after, the LG D821 made an appearance at the Bluetooth SIG, sparking a debate on whether or not the D820/D821 was merely a G2 network variant. Long story short, it was believed that the D821 was the G2 variant based on the dimensions listed in the FCC filing (despite the model number being so far off from the G2’s D802). And that was the last we heard of that.

Now we’re seeing the LG D821 show up once again, this time ready to roll in Brazil, where documents from telecommunications regulator Anatel is showing it’s already been approved for use on their new 4G LTE network. In the images, you can see this is clearly the Nexus 5 that’s been making the rounds as of late, along with the model number “LG D821”. 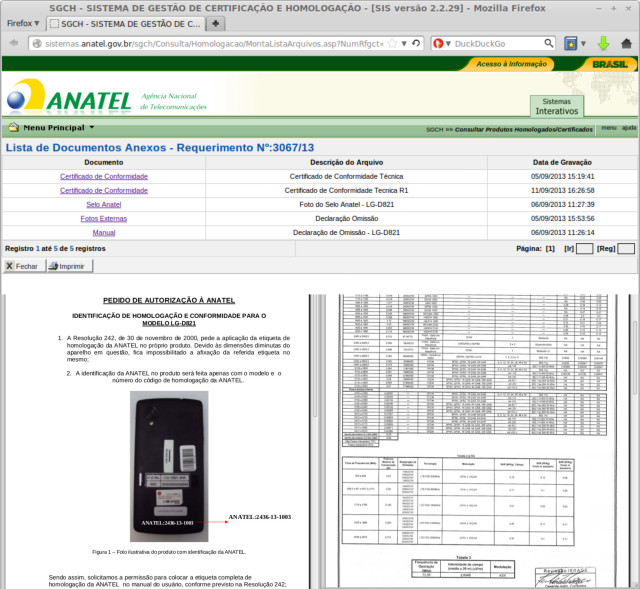 This is huge for Brazil, as they’ve typically only received Nexus devices many months after they launched in the US (it was in March they finally got access to the Nexus 4). While Nexus devices aren’t sold through the Google Play Store in Brazil (there’s only a select few countries that have access to Google Play devices, Brazil not being one of them… yet), the fact that the Nexus 5 is already cocked and primed for its Brazilian release hints at the possibility of a worldwide launch.

Despite HTC pulling out of Brazil last year, the country is quickly growing into the 5th largest smartphone market, just behind China. It was back in April Anatel’s president Joao Rezende said he expects sales of about 4 million 4G devices before the end of the year. Seems Google (and LG) could be eying a slice of that pie. In any case, it’s looking like the mystery of the D821 has finally been solved.

Thanks to whomever sent this in!