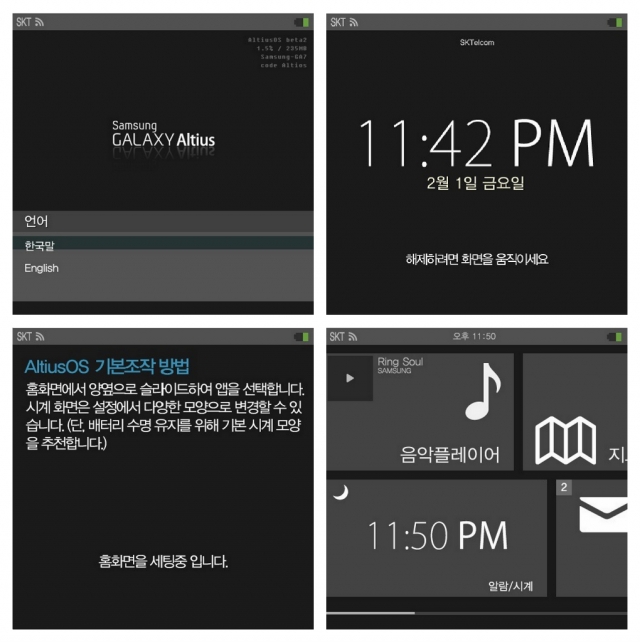 There’s been many a murmuring around the blogosphere of a possible Apple iWatch and with Samsung’s hands in just about every hardware configuration these days, it wouldn’t surprise us if they were working on a smartwatch of their very own. In fact, we kind of suspected something along those lines after it was rumored that Project J — once an alias of the Galaxy S4 — could now refer to a line of Samsung devices dubbed “Altius.”

Today, a collection of 500×500 screenshots is causing some stir, showcasing a tiny UI from something labeled as the “Galaxy Atlius.” Interestingly enough, these apparent images originated from Samsung’s homeland of South Korea, grabbed from a message board discussing the possibility of a Samsung branded smartwatch.

Really, we don’t have much to go on, but you’ll notice SKT and SKTelecom (South Korean operators) in the upper right hand corner of the grabs, hinting at the possibility of some kind of network connectivity. Also, we can’t be sure if the OS on Samsung’s smartwatch — dubbed AltiusOS from the screenshots — is even Android-based (like the Motorola ACTV), or if it simply offers connectivity to a compatible Android handset.

What we do know is, based on these screenshots, the watch will feature a touch-based OS, as shown by the big icon panels similar to Windows Phone, and the horizontal page indicator along the bottom. If it turns out these screen grabs are legit, it’s very possible we could see this Samsung smartwatch launch alongside the Galaxy S4 and Galaxy S4 Mini, rumored to hit store shelves as early as April.

What do you guys think? We’ve seen quite a few new entries to the connected watch category these past few months with the I’m Watch, Pebble, etc..  Do you think a smartwatch offered from Samsung would entice you?