One of the biggest questions posed to Google when it revealed Project Glass was “what about those of us who wear prescription eyewear?” Google quickly quelled fears as it confirmed the company would look to accommodate those of us who already wear glasses, though no word on how, exactly, that would happen could be had out of the Mountain View camp.

Well, it looks like Google is at least tailoring the technology to a few select testers as one was spotted wearing the contraption on a subway trek in New York City with corrective lenses in tow. The design looks very similar to what we’ve seen on the faces of Sergey Brin and friends, except with two pieces of glass hanging out front. 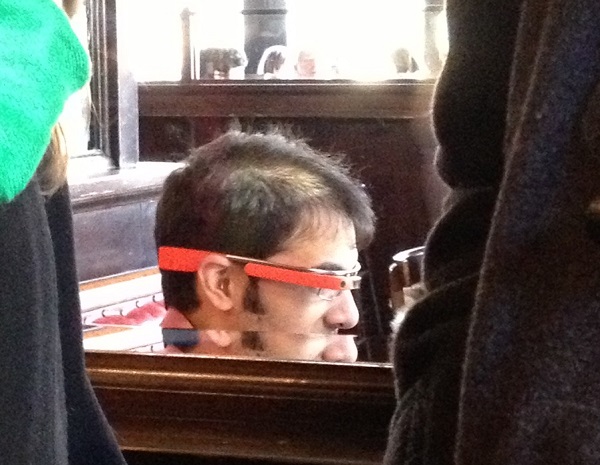 While it’s too early to tell what Google’s thinking about doing (we’re said to be at least another full year out from seeing these in consumer-ready form) it suggests the company could look to take custom orders for those who need shades or corrective lenses. Another possibility could be that Google will ship the product with optional mounts for lenses that can be fulfilled at popular stores at the users’ discretion.

Just a couple of days ago we pondered whether or not Google would go the fashionable route with Project Glass. Chris Chavez predicted Google would announce a partnership with premium framers Ray-Ban to bring a tad more fashion to this geeky-looking tech toy. We want it to happen, and it certainly still could happen, but for the time being the prototypes are still being made with the original design in mind.

One implementation we were big fans of was a way to detach the screen/camera overlay from the base frame and mount it onto existing lenses and frames, but this solution might not be the best route for Google. If the company can’t ensure the mount will fit correctly on any and all frames (the positioning of the screen is the biggest issue) then that is something that should be avoided.

Google knows the road to getting this product into the hands of eager consumers is long, and will be hard. Spokesperson Barbak Parviz alluded to as much, saying that the hopes are to have the final version of the product in retail at some point in 2014.

With any luck Google will be right on schedule, and can finally deliver the prototypes which developers paid $1,500 to own back at Google I/O (we plopped money down for three of them) at some point this year. Should that happen, Parviz expects developers to have access to the software and features that will be close to the end product. We’ll have to wait and see what’s in store, but we’ve been following this ambitious journey every step of the way and will continue to do so all throughout 2013.