There’s no doubt that a ton of people were surprised by the OUYA’s meteoric rise. As a mere idea it generated tons of interest — in the form of multi-million dollar funding on Kickstarter — and is poised to be one of the most highly anticipated Android-powered boxes to date. With great success comes a big spotlight, though, and many other companies are beginning to shine it on a segment of the television computing market that has great potential.

The latest player is Wise, and its Wise TIVI product is looking to whisk folks away with its sleek and modern looks, but also its impressive specs. Well, they’re not quite as impressive as the OUYA’s but when you look at the size of this thing you won’t think much of the differences.

Packed into what could be the size of a flash drive is a 1.6GHz Cortex-A9 dual-core processor with quad-core Mali-400 MP graphics, 1GB of RAM, 4GB of internal storage, WiFi, a micro-USB port, a full-sized USB port, a TF Card slot for up to 16GB of additional storage and more. It connects to your HDTV using a built-in HDMI port, and as simply as you can plug it in you can transform any HDTV into a smart TV.

The unit will run Jelly Bean 4.2 to start, and it’s our understanding that you will be able to get your content straight from the Google Play Store so you already have a pretty large backlog of apps and games at your disposal once it launches. We’re told that the full Google TV experience will be enabled here, enabling users to search for their favorite TV and movies across a multitude of services and utilize picture-in-picture to let you watch and surf at the same time.

Wise TIVI will be compatible with several accessories such as a wireless gaming controller, and an “air” keyboard/mouse for wireless control and navigation. You can also choose between several different colors, including green, blue, white and black.

The smallish multimedia stick will also be flanked by a more traditional set-top box with component connections, but it will only come with Android 4.2. A third unit, the Wise Camera, will give users the full Wise experience with the ability to do live video chats and take pictures.

You can’t get these just yet, but a pre-sale period has begun for those who might be interested in one in the future. The Wise Box will run you $59, the portable stick will run you $79, and the camera-enabled unit will cost you $89.

We haven’t been able to get much information on whether or not the accessories will be sold separately, but you can be sure we’ve asked to find out. Wise tells us that its Kickstarter campaign will also be starting up soon so there may be a chance to get in on some unique pledge deals. We’ll be on the lookout for that so stay tuned to Phandroid as more details of this promising bundle of joy are unveiled. Head to Wise’s site for more information in the meantime. 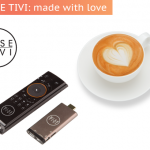