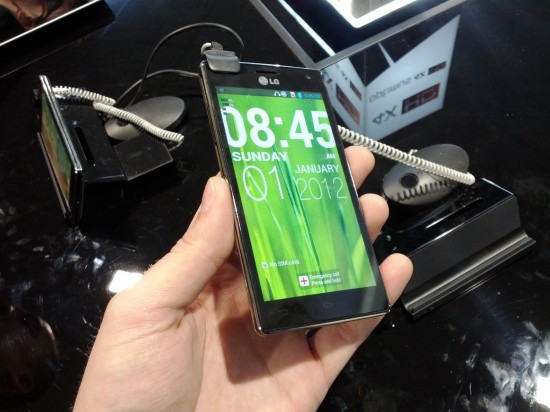 Last year at MWC LG brought us the first dual-core smartphone to hit the mass market. You can check with Guinness, they have it marked down as a world record. This year the mobile maker wants to recapture the magic by doubling down on the cores and adding a new sense of high-end style with the Optimus 4X HD. As the name implies, the phone rests its power upon two pillars: the aforementioned 1,5GHz quad-core CPU (a Tegra 3 chip) and a 4.7-inch True HD IPS display.

While the focus will mostly be on the greater processing power, the HD display is hands-down one of the best we have ever seen (I feel like I am rewriting that sentence with every new handset I pick up). It’s the same technology found in LG’s Optimus LTE, and it shines all the brighter (pun intended) in the 4X HD. LG is touting True HD IPS as superior to Super AMOLED HD and they make a pretty good case.

Combine the high-quality screen with a blazing fast processor and say hello to some great gaming experiences. Running through a few demos of Backbreaker Football and Sprinkle really demonstrated the power behind the Optimus 4X HD. Hi-def video playbook was also top notch and you won’t find too many instances of the 4X HD’s Ice Cream Sandwich build stumbling over itself. As a general aside about quad-core processors, the added speed won’t be immediately noticeable when using the phone for general OS-level tasks, but trust us, it’s there. 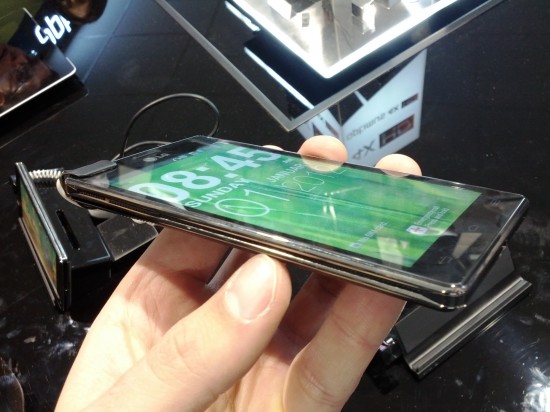 With the new flagship model LG is also placing a renewed emphasis on style. A “prism-edeged” design not only looks great but also provides plenty of grip while the materials and build quality used feel nothing but first class. Somehow the handset manages to stay only 8.9mm thick, an impressive feat when you consider the Optimus 4X HD’s internal configuration. Aside from the 1.5GHz quad-core chip the phone also holds 16GB of internal memory, 1GB of RAM, an 8MP rear camera sensor and 1.3MP front-facing, and a 2,150mAh battery.

Of all the handsets LG had to show off at Mobile World Congress, the 4X HD offers the best combination of cutting-edge features and quality design. This is the one we kept levitating back to during our time at LG’s booth — and for good reason. We’re still waiting for LG to offer an enriching Android experience via their OS customizations, however. LG’s take on Ice Cream Sandwich just isn’t doing the same things as what we are seeing from other manufacturers, and it has been the same in the past. If the Korean tech giant could bring their software game up to the same level as their hardware, it would be hard to find a better phone at MWC this year.