Verizon’s confirmed what we’ve all been hearing regarding the DROID Xyboard’s release date. As we saw yesterday, they became available for purchase online. Usually when Verizon does an online only release, an in-store launch follows just three days later. In a press release today, they have confirmed that the device will indeed be available for purchasein stores on December 12th, just as rumors have said. 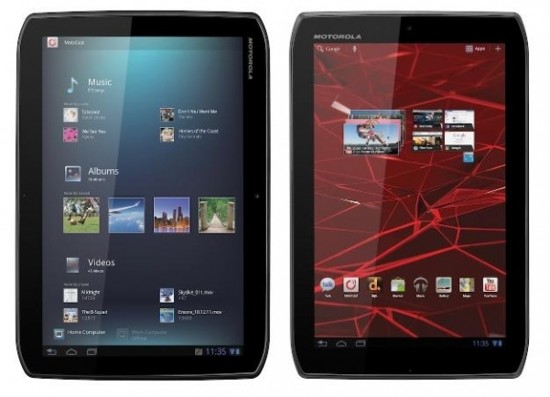 While Verizon refers to the DROID Xyboard as if it’s just one tablet, there are actually several different configurations to choose from in both size and storage. You can get 8.2 inch models with either 16GB or 32GB of data, while 10.1 inch models will be available with 16GB, 32GB or 64GB of storage, bringing the total amount of configurations to five.

All models are equipped with Verizon’s 4G LTE radios alongside some other common specs. We’re looking at a 1.2GHz dual-core processor, 1GB of RAM, Android 3.2 (Android 4.0 coming later) and more. Read on for more details and consider purchasing one online if you can’t wait until Monday to check one out in stores.

The DROID XYBOARD 10.1 and DROID XYBOARD 8.2 by Motorola are available online starting today at www.verizonwireless.com. Both tablets will be in Verizon Wireless Communications Stores on Monday, Dec. 12. For a limited time only, customers can take advantage of a special promotion and receive $100 off a DROID XYBOARD tablet with the purchase of a DROID RAZR™ by Motorola with a new two-year customer agreement.

Lighter than a paperback book and thinner than an AAA battery, the DROID XYBOARD tablets feature Android™ 3.2 Honeycomb, the blazing speeds of Verizon Wireless’ 4G LTE network, enterprise-grade security and the power of dual-core 1.2 GHz processors. Both tablets will be upgraded to Android™ 4.0 Ice Cream Sandwich. Plus, they are equipped with MotoCast™ for remote access to non DRM-protected music, pictures, videos and documents stored on work or home computers’ hard drives. DROID XYBOARD 10.1 and 8.2 customers can soar through the Web at blazing download speeds of 5 to 12 megabits per second (Mbps) and upload speeds of 2 to 5 Mbps within 4G LTE Mobile Broadband coverage areas.

Customers can visit www.droiddoes.com/xyboard for information about the DROID XYBOARD tablets by Motorola. For more information on Verizon Wireless products and services, visit a Verizon Wireless Communications Store, call 1-800-2 JOIN IN or go towww.verizonwireless.com.