Acer’s just unveiled their 10.1-inch tablet that will run the “Google Android Tablet OS” (Honeycomb?) and it isn’t that bad of a device from the looks and sounds of it: it’ll come with a 1GHz NVIDIA Tegra 2 processor, a 5 megapixel rear-facing camera, Acer UI 4.5, HDMI output, and a screen resolution of 1280 x 800. We should be seeing this one sometime in April. 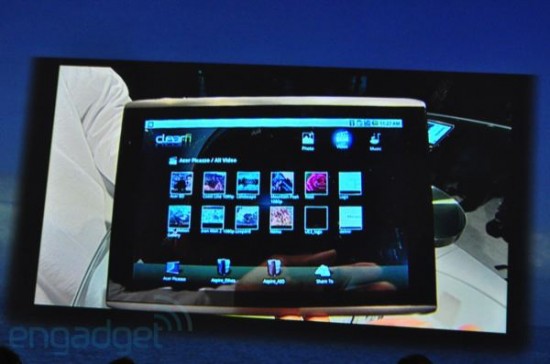 Next up was a 7-inch tablet running Android with the same WXGA resolution of 1280 x 800 and a 1.2GHz Qualcomm Dual-Core processor. We should also be seeing this one in April. We weren’t able to extract many more details from the live feed Engadget’s got going. 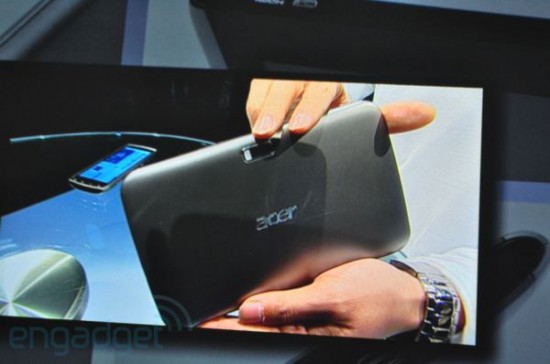 Finally, the 4.8-inch device they’re touting is “100% smartphone, 100% tablet.” This one will have a 1.3 megapixel front-facing camera, an 8 megapixel rear-facing camera with HD video recording capabilities, 6-axis motion sensing, and LED edge lighting. It, too, will be launching in April and will have an “evolution of Acer UI.” 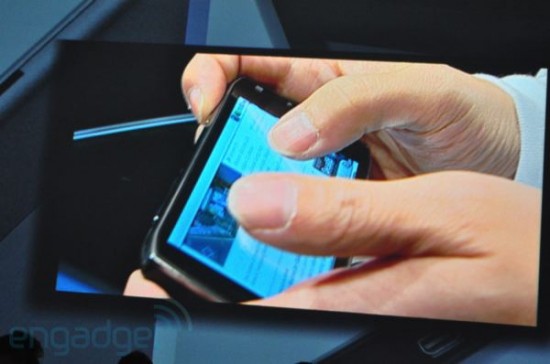 Whew. That’s a ton of devices. None of them have names yet, apparently, but we’ll just name them Archos-style, for now. (Acer 101, 70, and 48.) We’re still digging for more details, but for now, just know that Acer isn’t joking when it comes to Android and they’ve got some pretty heavy-hitting devices headed our way in early 2011.

[Update]: You can watch the conference live on Acer’s site. Click over. (And hope you can get a good connection as this thing is choppy.)

[Update 2]: Here’s a press release for the phone, which still doesn’t have a name. At least we’ve learned of the display’s resolution: 1024×480. It also has Bluetooth 3.0, WiFi N, HSDPA @ 14.4 for cellular connectivity, and the camera has an acompanying flash. The processor is also confirmed to be a 1GHz Snapdragon, but there’s no word on which generation Snapdragon it is. (We’ll assume it’s the latest, for now.) This one also shares the same HDMI-out connectivity that its big brother 10.1-inch Google Android tablet (seriously, what’s with the lack of names, Acer?) touts.

Thanks to the Q&A session that followed, we also learned that Acer was specifically waiting on Google for the tablet version of Android: they didn’t want to make a tablet device with software meant for a phone. This means you should expect to see Honeycomb on these devices whenever they launch sometime in Spring.

New York, November 23rd 2010 – The new Acer smartphone with the soul of a tablet perfectly combines the capabilities of a smartphone with a tablet-like format: a huge 4.8″ widescreen with a 21:9 aspect ratio and a super cool chassis.

Its revolutionary design , characterized by a stretched out, thin and slightly curved shape, makes it a fascinating device that will not go unnoticed. Its full metal body, enriched by subtle wavy patterns, conveys a sense of timeless elegance. What’s more, it offers a perfect fit in your hand thanks to its smoothly curved back and minimal width (64mm).
The front is entirely dominated by the extraordinary, multi-touch, high resolution 4.8″ screen, with 4 keys: Home, Search, Back, and Menu. While on the back there is an 8MP camera, complete with LED Flash.

This latest Android smartphone is extremely powerful, guaranteeing long-lasting fun. It will also be able to wirelessly control all the multimedia content of your home environment, thanks to the integrated clear.fi media sharing system.

IDEAL FOR BROWSING
• No limit in assessing any web sites with the same user experience as using a traditional PC, so web sites don’t need to be resized and adjusted, thanks to its exceptional resolution of 1024×480 and a very large 4.8″ screen (12.2cm diagonal), there is no need to zoom in on web pages, or to scroll left & right. The only thing you need to do is scroll up & down, just like on your PC.
• Fast and fully featured, the Android browser offers: multi-touch, Java script optimization, Adobe Flash Player 10.1 support, and multiple page opening.
• Ultra-fast high-speed connectivity via HSDPA @ 14.4 and WiFi N for data connection.
• Bluetooth 3.0

GREAT FOR MOVIES
On the 21:9 screen you can watch a movie in its original format, for an engrossing cinema-like experience. What’s more the LED backlit display uses the same technology as TV showing super bright and vivid images; to top it off, Dolby Mobile technology delivers vibrant, immersive sound. Not enough for you yet? Thanks to DLNA technology or the HDMI cable, you can connect it to your TV to view your content on an even bigger screen!

POWERFUL
Inside the product beats the powerful 1GHz Snapdragon processor, which, in addition to the large screen, turns this smartphone into a perfect game console. Together with 6-axis motion sensing (Gyroscope + accelerometer), this smartphone will exceed any gaming expectation.
Equipped with an 8MP camera and LED flash, and a 2MP front camera for high quality IP video calling.
With a screen resolution of 1024×480, more content can be displayed on screen, in all regular apps, such as, Contacts, Google Maps, Email, Instant Messaging conversations, etc.

100% Smartphone, 100% Tablet: a revolutionary experience for people who want it all!