Huawei Freebuds 3i review: amazing ANC earbuds on a budget

If you’ve been looking to purchase a pair of true wireless earbuds lately, you’ve probably noticed that the market is flooded with a thousand and one options. There are options in the $30 to $80 range from companies that you’ve never heard of before, but if you want to buy something decent, you’ll easily need to shell out $100 at the low end or splurge and spend upwards of $250. Spending that much on earbuds may sound insane, but in addition to much better audio quality and battery life, you also get active noise cancellation, a feature that’s typically exclusive to the high-end of the market.

The Huawei Freebuds 3i take a different approach by delivering active noise cancellation, good audio quality, and decent battery life for significantly less than the competition. 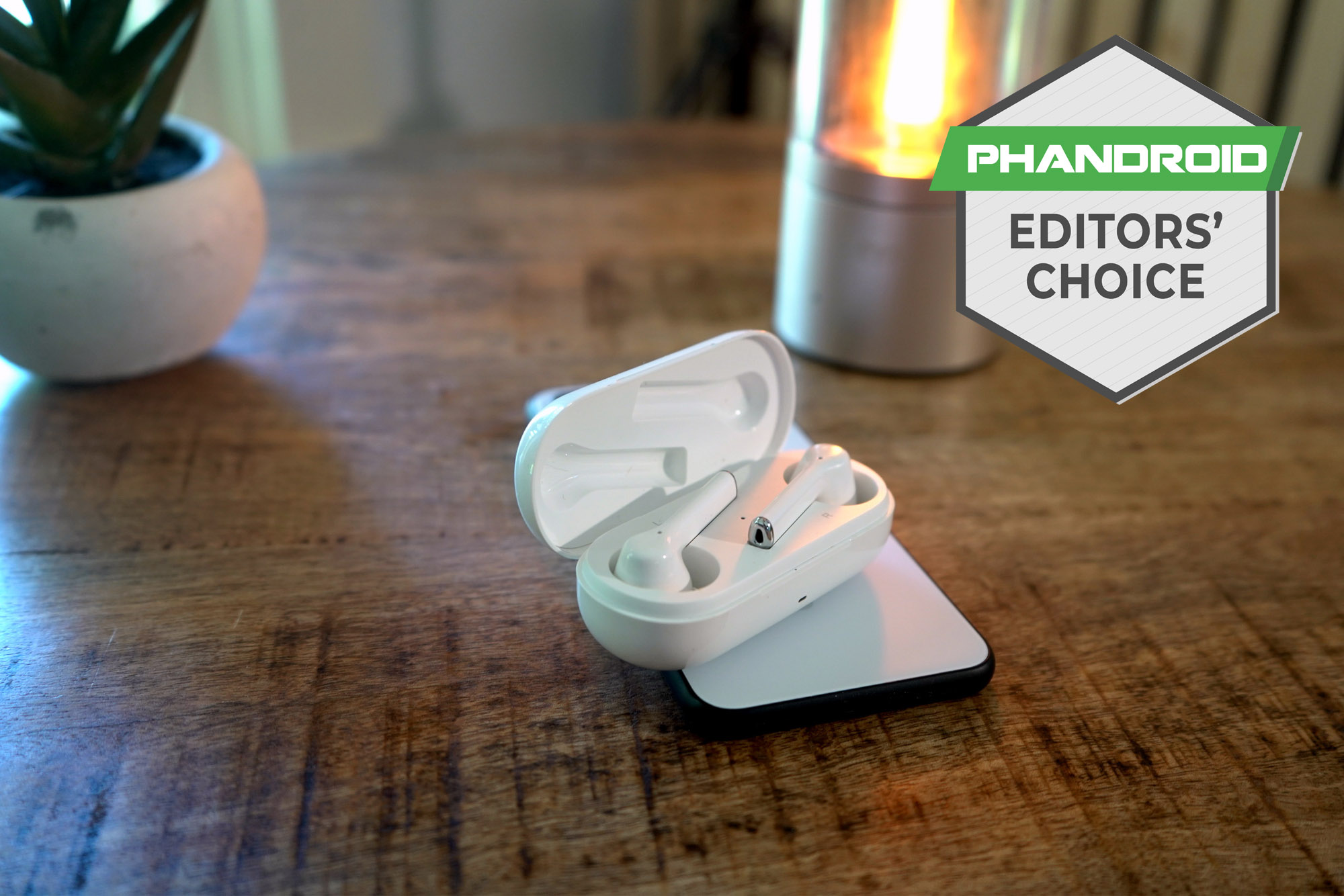 Since price is the main barrier to entry when looking at earbuds with active noise cancellation (ANC), let’s get that one out of the way first. The Huawei FreeBuds 3i cost $110 (£89 in the UK,  €99 across the rest of Europe). There are plenty of alternatives at around the same price as the Freebuds 3i, but you’ll need to spend a good $50 more if you want anything with ANC. Even Samsung’s new Galaxy Buds+, which are priced at $150, don’t come with active noise cancellation. 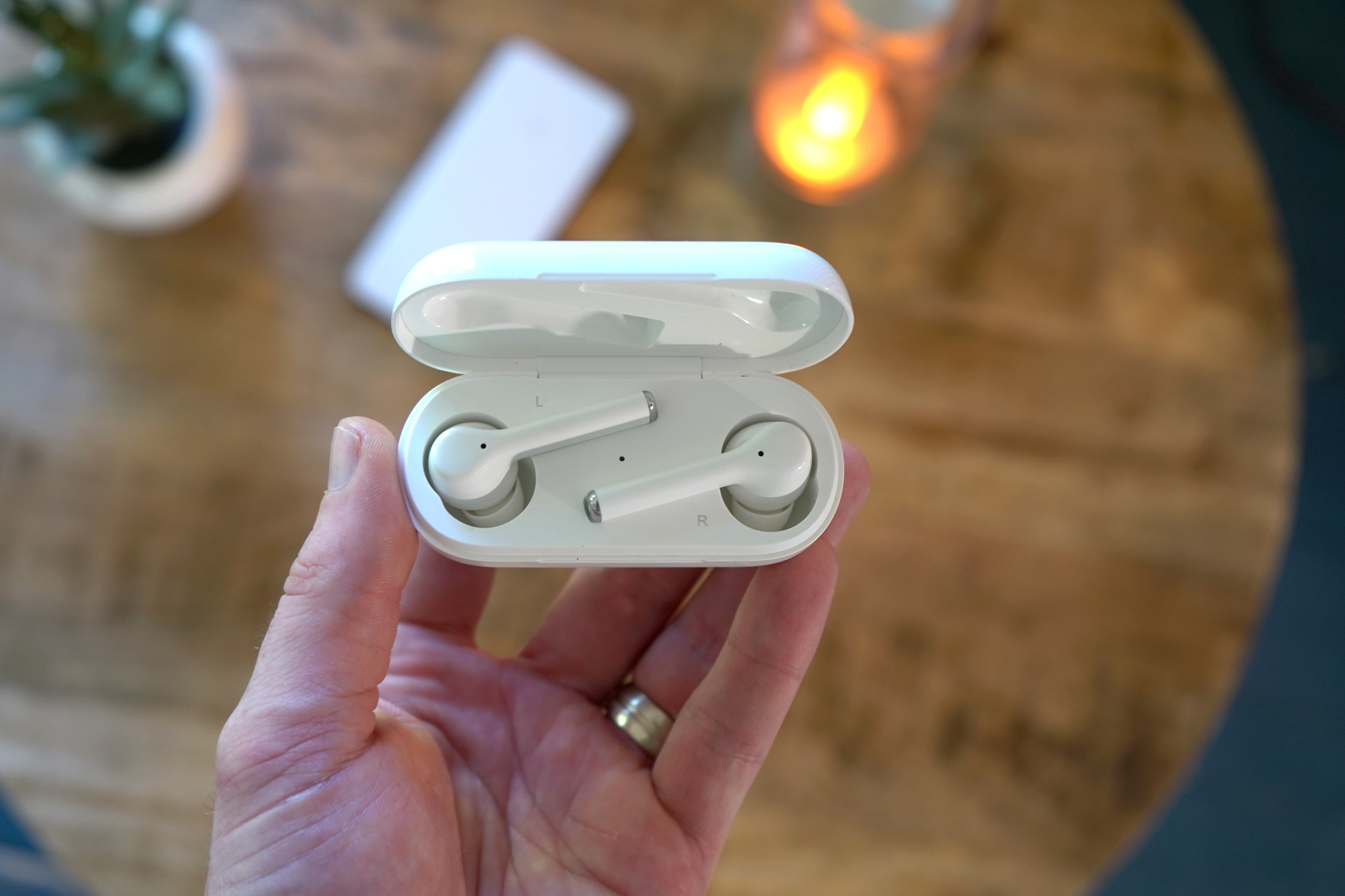 The basic design is similar to Apple’s AirPods Pro with a slightly longer stem, but in reality, the Freebuds 3i earbuds and case are practically indistinguishable from the Freebuds Huawei put out in 2018. While Huawei gets a bad rap for borrowing design ideas from Apple from time to time, this time around it was Apple doing the copying.

The design isn’t eye-catching, but it’s functional and the traditional canalphones design with rubber tips that help secure the earbuds in your ear canal for a secure fit and seal is quite comfortable. Huawei has also gone out of its way to deliver exceptional build quality with both the case and the earbuds. The glossy white plastic doesn’t allow anything to stick to the earbuds and after using them for over a week, everything still looks brand new.

The pill-shaped case is quite solid, delivering a satisfying click when flipping it closed. Unlike similar-looking cases from competing headphones, this one doesn’t creek or bend when applying pressure from different sides. It’s not quite as nice as the puck-shaped case of the Freebuds 3, but the quality’s just as good.

With earbuds like these, I typically prefer cases which cylindrical holes to drop the stems of the earbuds into, but the case for the Freebuds 3i sport some impressive magnets which allow the earbuds to snap into place perfectly every time without having to futz around to make sure they’re perfectly aligned before putting them in. Samsung and Mobvoi should definitely be taking notes.

Huawei has also thrown in an IPX4 water-resistant rating to ensure that the Freebuds 3i won’t short out if they get wet. The IPX4 rating isn’t good enough to allow you to use the earbuds while swimming, but it’s enough to keep them working if you get caught in the rain or if you use them at the gym or while running or cycling. 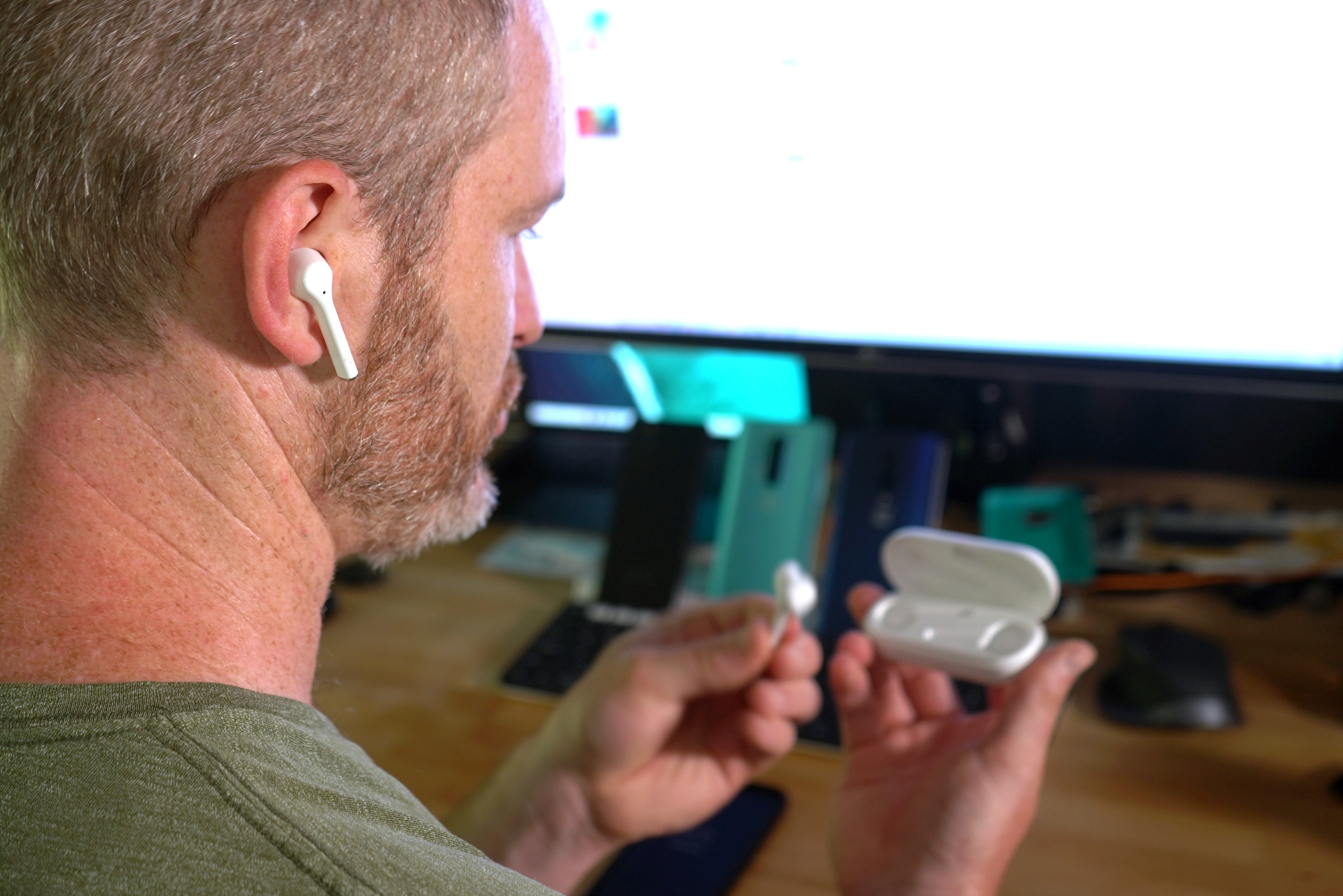 At its core, active noise cancellation is a pretty basic technology. Use a microphone to listen for ambient noise and then rebroadcast an inverted sound wave through the headphones or earbuds.

While that’s simple enough, the design of the microphones used and the design of the earbuds play a huge role in what the end result sounds like. Last year’s Freebuds 3 offered up to 15dB in noise reduction with ANC turned on, but it mainly focused on high frequencies, proving less effective at blocking sound from air conditioners, cars, or other sources of lower frequency sounds.

The design also played a factor in overall noise-canceling performance since the design of the original Freebuds 3 didn’t block ambient noise from entering the user’s ear canal. The canalphones design of the Frrebuds 3i and their silicon tips give them an edge over their premium sibling and allow them to deliver up to 32 dB of noise reduction when active noise cancellation is turned on.

The difference is remarkable. While the regular Freebuds 3 do a decent job of reducing ambient noise, the fit and seal offered by the Freebuds 3i is dramatically better, practically reducing ambient noise to zero. With the ANC turned on, it’ll nearly completely drown out the sound of a bus, subway, and if you’re just staying home this summer, you’ll forget that you’re sitting a few feet away from an air conditioner.

I’d say the noise cancellation is on the same level as what the Sony WF-1000XM3 true wireless earbuds deliver, which command nearly double the price. 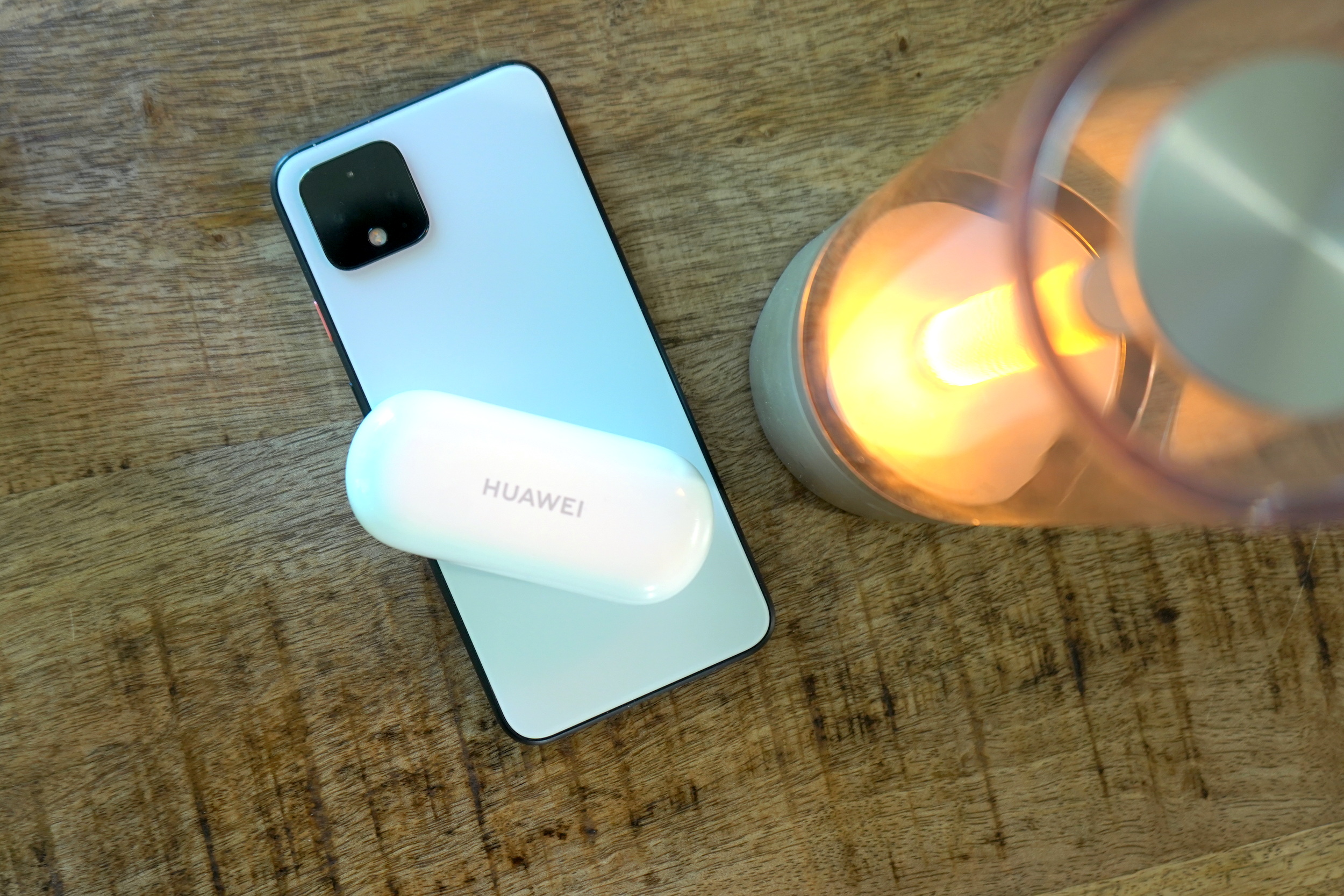 Huawei uses a 10mm dynamic driver system for each earbud, delivering a fairly neutral audio profile. The earbuds are capable of producing rich bass and crisp highs without letting them run reach too high up.

The base doesn’t go quite as low as I’d like, but it’s perfectly acceptable for earbuds at this price point. The overall volume is more than acceptable. Turning the volume up all the way can be a bit uncomfortable, but Huawei’s engineers have managed to eliminate any distortion even when the volume is cranked all the way up.

Thanks to ANC, I never felt like I needed to raise the volume over 80%, even when using the earbuds while running. Honestly, I found myself turning ANC off while running outside just so that I could let some ambient noise pass through to be more aware of my environment.

The earbuds also deliver stellar audio quality and noise cancellation when making phone calls as well. Thanks to the bone-conducting microphone in each earbud, the Freebuds 3i are able to easily isolate your voice and cancel out ambient noise when you’re on a call. On multiple occasions, people on the other line mentioned how clear the audio was even though I was making calls while walking down the street or while driving.

If you’re looking for the longest-lasting true wireless earbuds, you’ll want to look elsewhere. Huawei rates the Freebuds 3i at 3.5 hours on a single charge, with an added 14.5 hours of battery life while using the case.

In a week of using the earbuds for listening to music, podcasts and watching YouTube videos and Netflix, I managed to completely drain the buds and the case 4 times. I manager to average 3.1 hours on a single charge with the earbuds with ANC turned on and 3.4 hours with ANC switched off. The 14.5 hours of additional listening time was just shy of 14 hours in my testing.

Unlike the more expensive FreeBuds 3 which allow both earbuds to pair with the phone independently thanks to their use of Bluetooth 5.1, the Freebuds 3i use a relay system that connects one earbud to your phone and then rebroadcasts that connection to the second earbud. This older connection system is likely the reason the Freebuds 3i have slightly inferior battery life to the Freebuds 3. 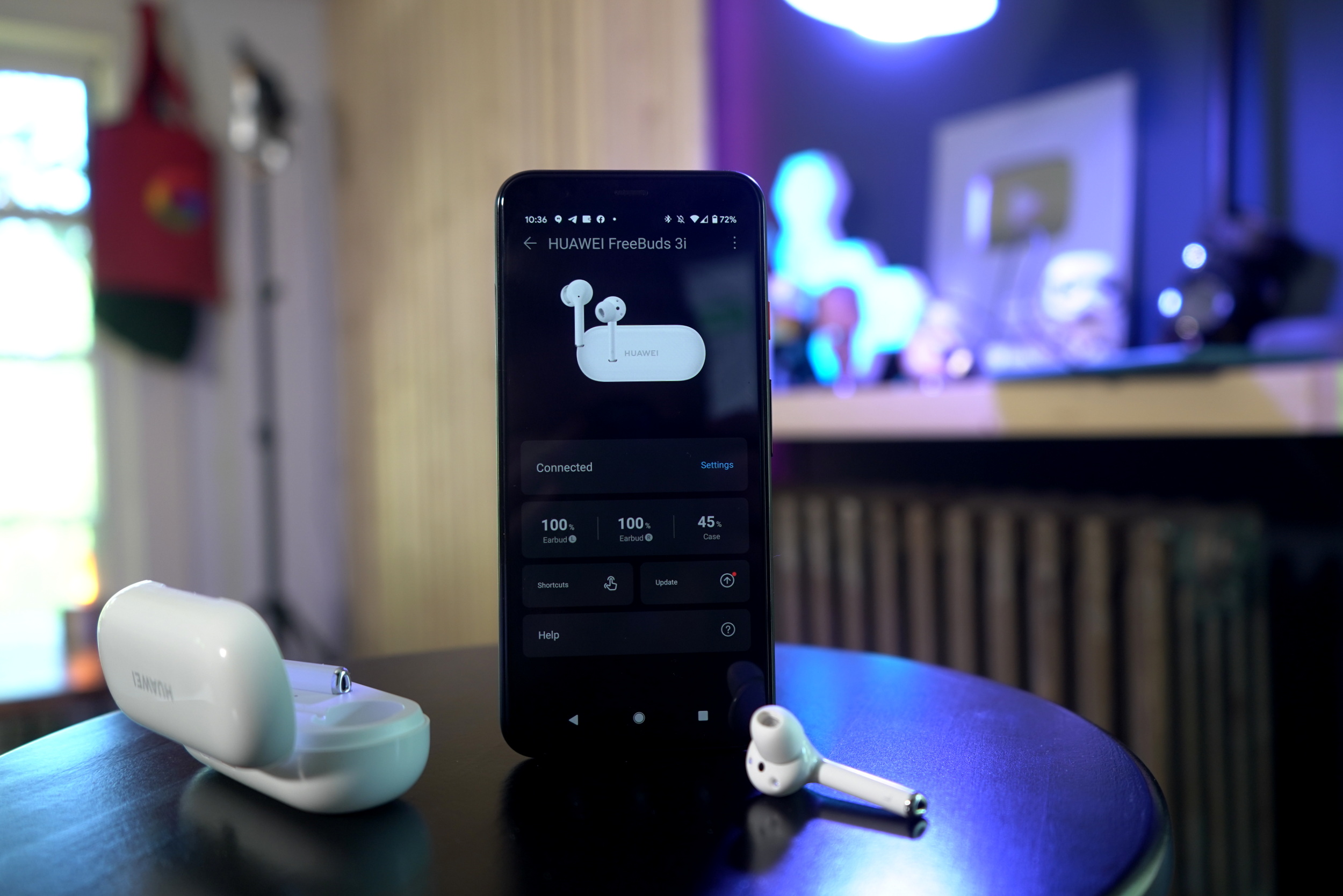 If you want to get the most out of these earbuds, you’ll want to download Huawei’s AI Life app to your device. The app isn’t a requirement, but it will allow you to see the battery life of each earbud on your phone and give you the ability to customize the Freebud 3i’s touch controls.

Within the app, the tap-and-hold touch can be turned on or off. I’m not sure why anyone would choose to turn this feature off since it’s the only way to control the ANC function on the earbuds. The double-tap function for each earbud can be customized to control Play/Pause, Next/Previous, or wake the Voice Assistant on your phone. There are no volume controls options, which is a bit of a disappointment.

As for connectivity, the Freebuds 3i use Bluetooth 5.0 to connect to your smartphone, tablet or computer. Simply open the case and hold the button on the back for a few seconds and the earbuds will show up for pairing within seconds.

The only time I noticed any issues with the Freebuds 3i was when I forget my phone in my home office which is in the attic of my house. I regularly walked from room to room on the same floor without a single hiccup, often moving more than 50 feet away from my phone. Surprisingly, I didn’t have any connectivity issues when listening to music or a podcast with my phone in my back pocket. I don’t know how many Bluetooth headphones I’ve used over the years that struggle maintaining a solid connection in this specific situation.

Now, I’ve been a big fan of the original Freebuds 3 since I reviewed them earlier this year. While those earbuds still offer better battery life and wireless charging for the case, the new Freebuds 3i are an amazing alternative, especially if price is a priority. There are quite a few true wireless earbud options in the $100 range that deliver similar audio fidelity. However, the Freebuds 3i from Huawei have a unique advantage thanks to the inclusion of active noise cancellation.

The Huawei Freebuds 3i are the best true wireless earbuds for under $150!