Sennheiser is known for high end headphones, making some of the most famous over-ear open-back headphones on the market. While there are plenty of amazing options for audiophiles in the headphone market, Sennheiser is the go-to brand for newly inducted audiophiles.

So it’s no surprise that they’ve gotten into the premium true wireless earbud game. The Momentum True Wireless are a stab at true wireless earphones that don’t sacrifice sound quality for portability and comfort.

The Sennheisr Momentum True Wireless come in a plastic case covered in a fabric. This is the only color and it looks quite good. 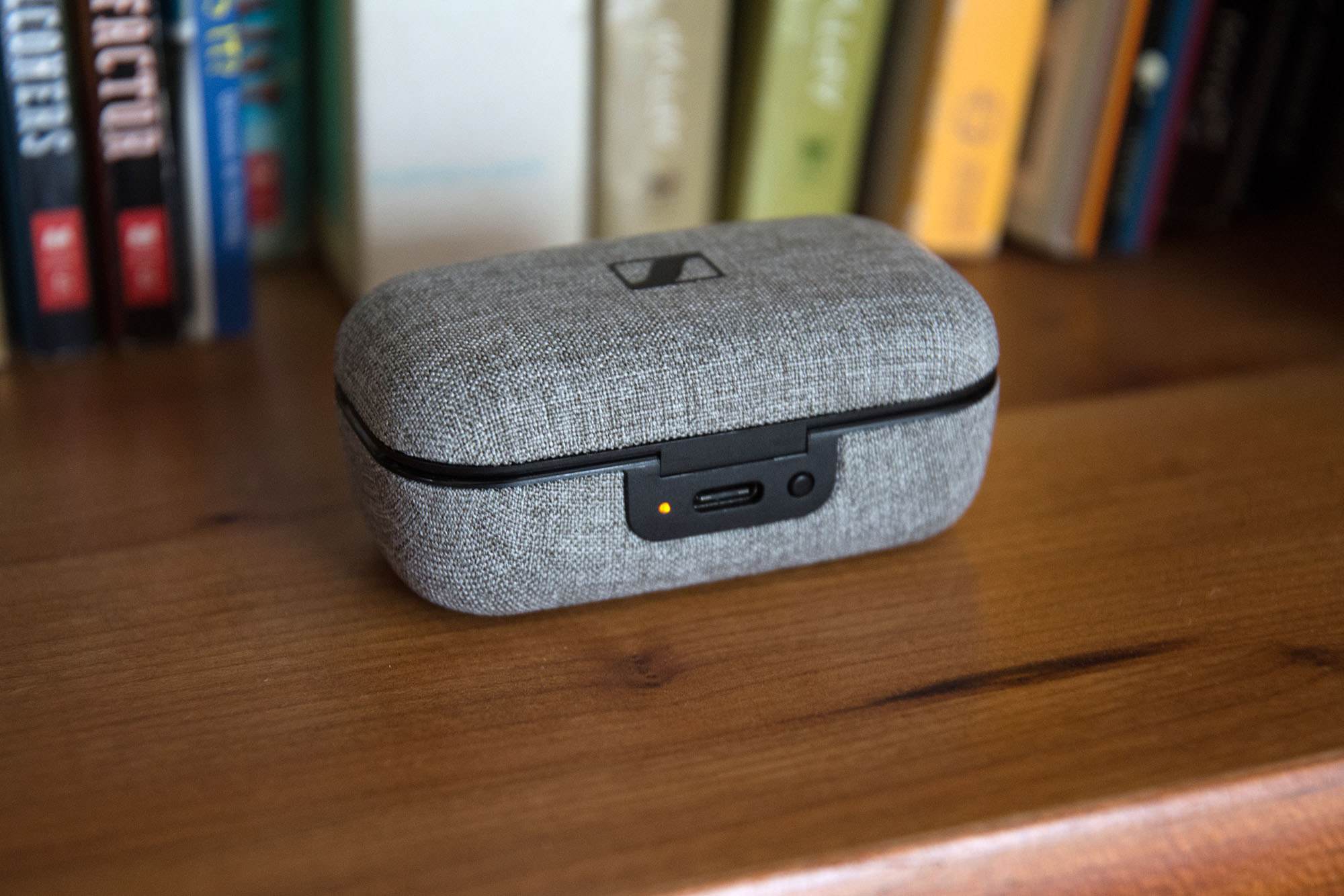 On the back you’ll find a USB-C port, which is great, and a button that seems decidedly low tech for anything over $50. To check your battery charge, you have to hit this small black button for the LED to light up. It just doesn’t seem elegant compared to most earphones.

The earphones are long and feature this metal looking finish on the end that doubles as a touch pad. The touch controls are complex but powerful, with one side (oddly the left side) doing media controls and the right doing transparent hearing and voice assistant. This does require a hefty tap, which is a little irritating when the earphone is so deep in your ear, but the touch controls work fairly well.

For $299 you expect some serious build quality. However, this is where Sennheiser disappoints. The case is made out of thin, cheap plastic. It isn’t very noticeable at the base, but the lid is extremely flimsy and has a huge amount of give. It twists and bends, entirely unbecoming of a premium product. Fortunately, the case is covered in some really nice fabric material. It both looks and feels really nice and doesn’t get dirty easily.

The earphones themselves have very solid build quality, though the plastic is plain and not particularly nice. No problems here as they’ll spend most of their time in your ears. They’re also aligned in the case so you can take them out and put them directly into your ear. This is a nice detail, as some earphones need to be flipped before inserting into your ear. They also have magnets so they don’t fall out of the case, which is something I love and wish all earphones had.

The nearest competitor to the Momentum TW is the Master & Dynamic MW07. These earphones cost the same at $299 and share a lot of aspects. The case is stainless steel with no flex or give, the earphones have metal cores and handcrafted acetate covers. They feel exquisite. Even the $129 Samsung Galaxy Buds are leagues ahead in build quality, particularly with the case. They are less than half the price and are entirely plastic, but the case is far more solid and the plastics used have nice finishes to them. The Momentum TW are relatively comfortable, though I’d call the comfort average. They’re meant to go deep into your ear, deeper than most earphones. Naturally, this means that they are more “obvious” feeling in the ear and create a much tighter seal than most. This can result in pressure build up faster than the competition, and overall it’s just not as comfortable as the best of the best.

However, there are no protrusions or sharp points that cause discomfort, and they don’t fall out of the ear easily. Despite their simple shape, they’re surprisingly stable and shaped to the ear.

There’s no denying it, these earphones sound amazing. They’re probably the best sounding true wireless earphones on the market.

The highs are crystal clear, while the bass is strong and very sharp and punchy. The bass is the focus here, as it’s a bit boosted and particularly clear and crisp. It takes the forefront and kicks much harder than expected.

Unfortunately, it is a bit excessive in some genres of music, particularly some rock and most metal. It gets boomy and distorted at times. This is normal with bass-heavy headphones and metal, but it’s still a bit of an annoyance at high volumes. Fortunately, with most other genres, the bass is a delight.

Compared to the MW07s, the Momentums definitely have them beat in the bass department, and the highs are smoother and aren’t quite as sparkly. However, the MW07 do have them beat in clarity of the highs, and they sound flatter and more “natural.” They also lack the bass distortion issue with metal.

Overall, I’d put the Momentum TWs above the MW07s, but just barely. Just barely. That punchy bass is so fun!

I’ve had some issues with connecting these earphones to various phones. Taking them out of the case usually has them connect to a device automatically if they were previously paired. Switching between devices is where the issue arises. Putting them in pairing mode and pressing on them in the Bluetooth menu once they’re discovered results in pairing failures, and using the app only works half the time.

Often, connecting to a new device takes a solid few minutes of annoying fiddling while the earphones loudly proclaim “NO CONNECTION” and “PAIRING FAILED” in your ear. The dialog is uncomfortably loud.

Connection issues aren’t entirely rare in Bluetooth products (after all, Bluetooth isn’t exactly a great, user friendly technology), but I haven’t had such issues with other high end products.

Actual connection strength has been flawless, with no major drop outs or range issues. You can walk pretty far away before you get audio issues, and in the pocket or across walls, the connection is strong and stable. If you don’t switch phones often, you’ll have no issues. 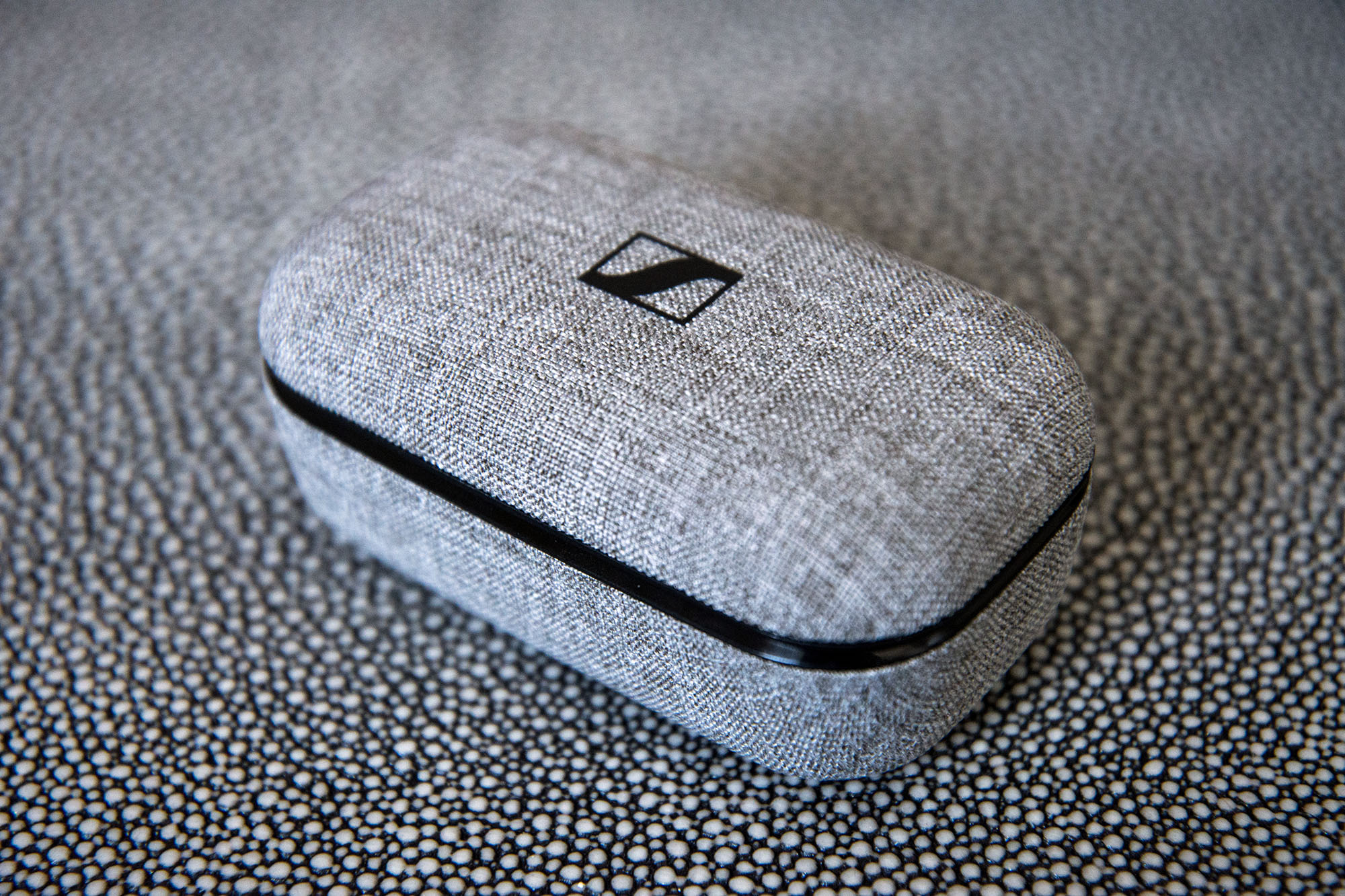 Here is where the biggest problem lies. It’s not that the battery life is bad. Sennheiser claims 4 hours per charge on the earphones and 8 more hours in the case. 4 hours is about average, though it’s not exceptional. The case being so large and housing only two extra charges isn’t bad but isn’t spectacular either.

No, the problem is with idle battery drain. Give the earphones 5 days after a full charge and they’re dead. No charge in the earphones or the case. Use them even a little during this time and that time shrinks further.

Not being able to leave your earphones unused for less than a week is absolutely unacceptable. As someone who doesn’t use wireless earphones every day,  I’d often find myself picking them up and finding them dead. No other earphones I use do this: The Galaxy Buds and MW07s can go for months without losing a substantial enough charge to affect the battery indicator.

The cherry on top is that when the case dies, the earphones think they’re no longer in the case and auto connect to your phone. This means you’ll miss all notifications and have no audio until you figure out that the Momentum TWs are the cause and you manually disconnect them.

These earbuds are pretty light on extra features, but there is one available thanks to the companion app. Transparent mode pumps surrounding audio through the earbuds, making it like you’re not wearing them at all. This is great for being aware of your surroundings, like when commuting or walking around a big city, while still listening to music.

Sennheiser’s Transparent mode is quite good, substantially better than Samsung’s hissy implementation. Audio quality is natural and you hear a lot of details. There’s no way to focus on voices like Samsung’s version, but I still enjoyed it. It’s not great in silent environments, where it tends to have a constant hiss, but this isn’t a normal use case. The app also takes ages to load and connect to turn on this feature.

The one issue I had is hair brushing against the mics. Where this happened rarely on the Galaxy Buds, I found that my hair more frequently brushed against the Momentum TW mics and made noise. A minor issue likely due to the more bulky construction, but one worth pointing out.

Purely sound wise, the Sennheiser Momentum True Wireless are absolutely amazing. They might be the best sounding true wireless earbuds on the market, and that’s saying something. The clear highs that aren’t too harsh, the strong punchy bass, it all made me want to love these earphones.

But the awful battery issues really kill the experience. Frankly, it’s hard to recommend these earphones despite the amazing sound. They’re just not practical. Not usable. If you think this won’t bother you and you just want the ultimate sound, grab them and be amazed. If you don’t charge your earphones every day, hard pass. The MW07 are a much better choice.