Huawei has seen its smartphone strategy flipped on its head in recent weeks. Despite its issues with the US trade ban, the Huawei P30 Pro is an incredible device which can compete with the likes of the Samsung Galaxy S10 and many other flagship devices we’ve seen this year.  The Huawei P30 Pro goes beyond featuring some of the best hardware packed into a smartphone, including optics which redefine expectations for a smartphone camera. But there’s much more than just the lenses to be impressed by. 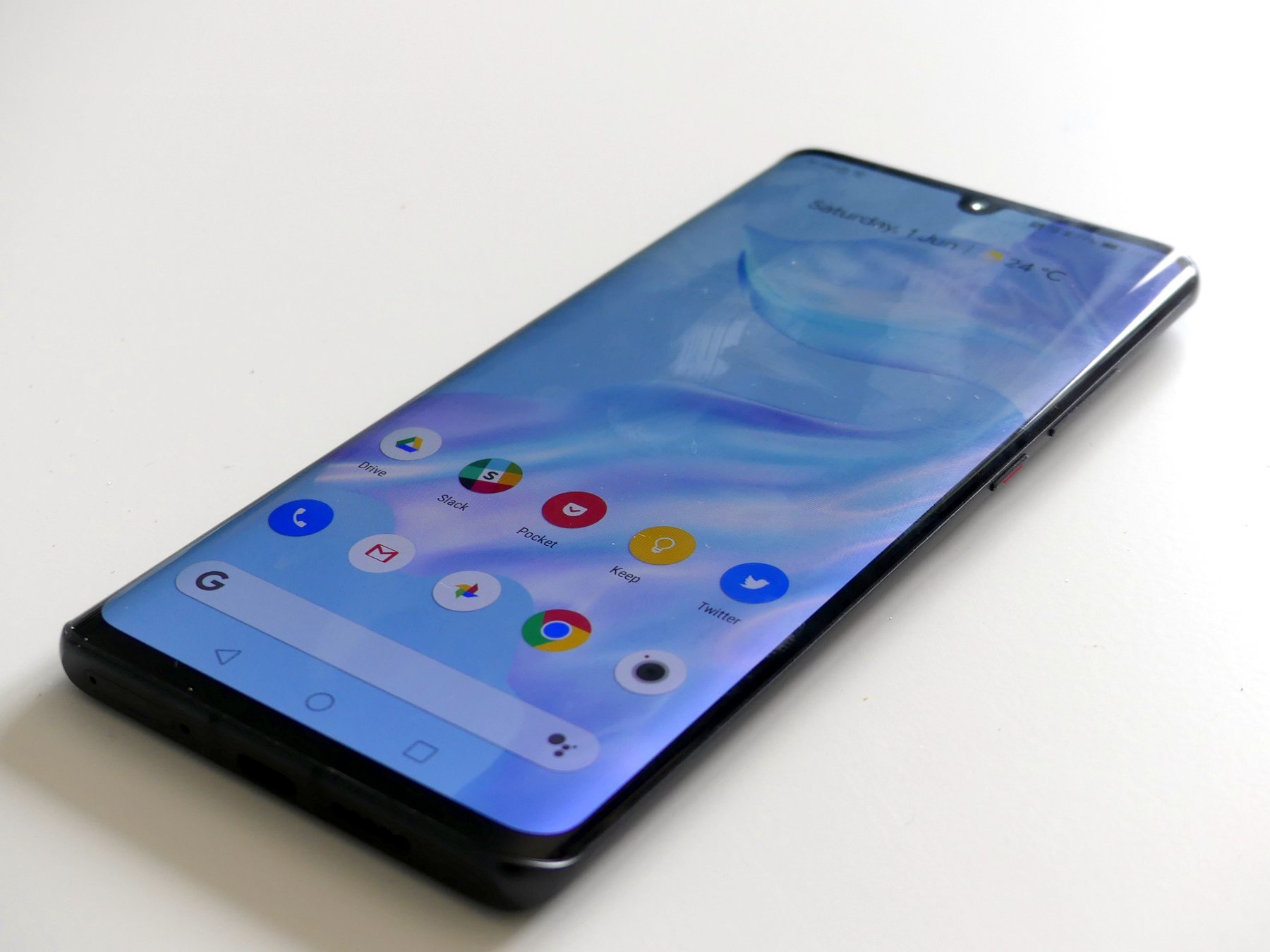 Huawei has been refining the look of its P-series smartphones over the years, improving its screen-to-body ratio, rounding out the hard edges and delivering a device that’s as good to look at as it is to hold. The first thing you’ll notice about the Huawei P30 Pro is the reduction of the notch found on the Mate 20 Pro in favor of a waterdrop design with a smaller footprint. There are fewer sensors packed into the notch, unavoidable given the reduction in space, but It’s a much cleaner and less intrusive design.

The second thing you’ll notice, which is a less attractive feature, is how the P30 Pro preserves fingerprints. While the glass finish on the rear of the device makes for a premium feeling smartphone, it gets grubby very quickly without a case. It’s not so much of a problem if you carry your device with a case or skin, but running it naked will leave a very smudgy layer of prints. 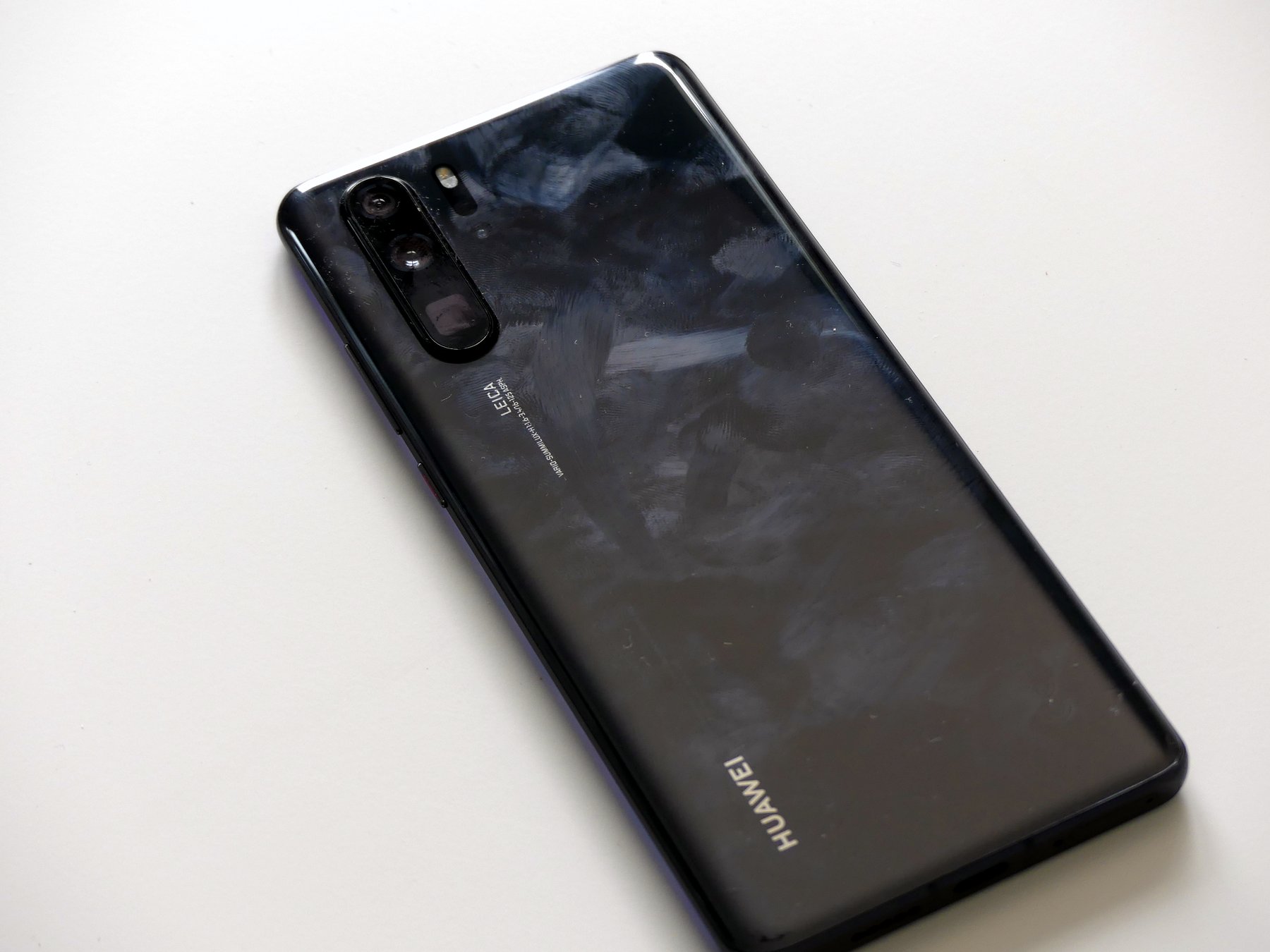 The camera array on the back of the device is a satisfying vertical arrangement but does protrude so will wobble when used flat on a desk. The aluminum frame feels solid in the hand, with the heft of a premium device at 192g with a profile of 158 x 73.4 x 8.4 mm and IP68 water resistance. I’m a big fan of the glass Huawei uses on the P30 Pro and the quality feel this gives the device, but it also does mean that any drop will likely be fatal so I would recommend using a case.

There’s the standard USB Type-C charging port on the bottom of the device along with the SIM card slot that supports either 2 SIM cards or a single SIM and Huawei’s proprietary micro memory card.

Huawei has kept the external buttons to a minimum with just the volume rocker and a single button on the right-hand side of the device. Rather than include a dedicated button to trigger an assistant, like some OEM’s have, Huawei has embedded a trigger to call Google Assistant in the power button itself. Complimented by a red accent, the textured button will call Google Assistant with a single press and then trigger the power options with a long press. It is quite tough to get to the power menu without triggering Google Assistant; I’m pretty sure during my time with the device I never actually succeeded in turning off the device without the inadvertent trigger, but how often do you turn your device off these days?

The Huawei P30 Pro is certainly a head turner and, in my opinion, the perfect blend of maximum screen real-estate without the need for a pop-up camera or a notch that takes up the entire status bar. The device feels very tall and narrow in comparison to, for example, the Galaxy S10+, which some may prefer. It does make one-handed operation pretty impossible without giant hands, but Huawei has included accessibility features as part of EMUI to help with that. 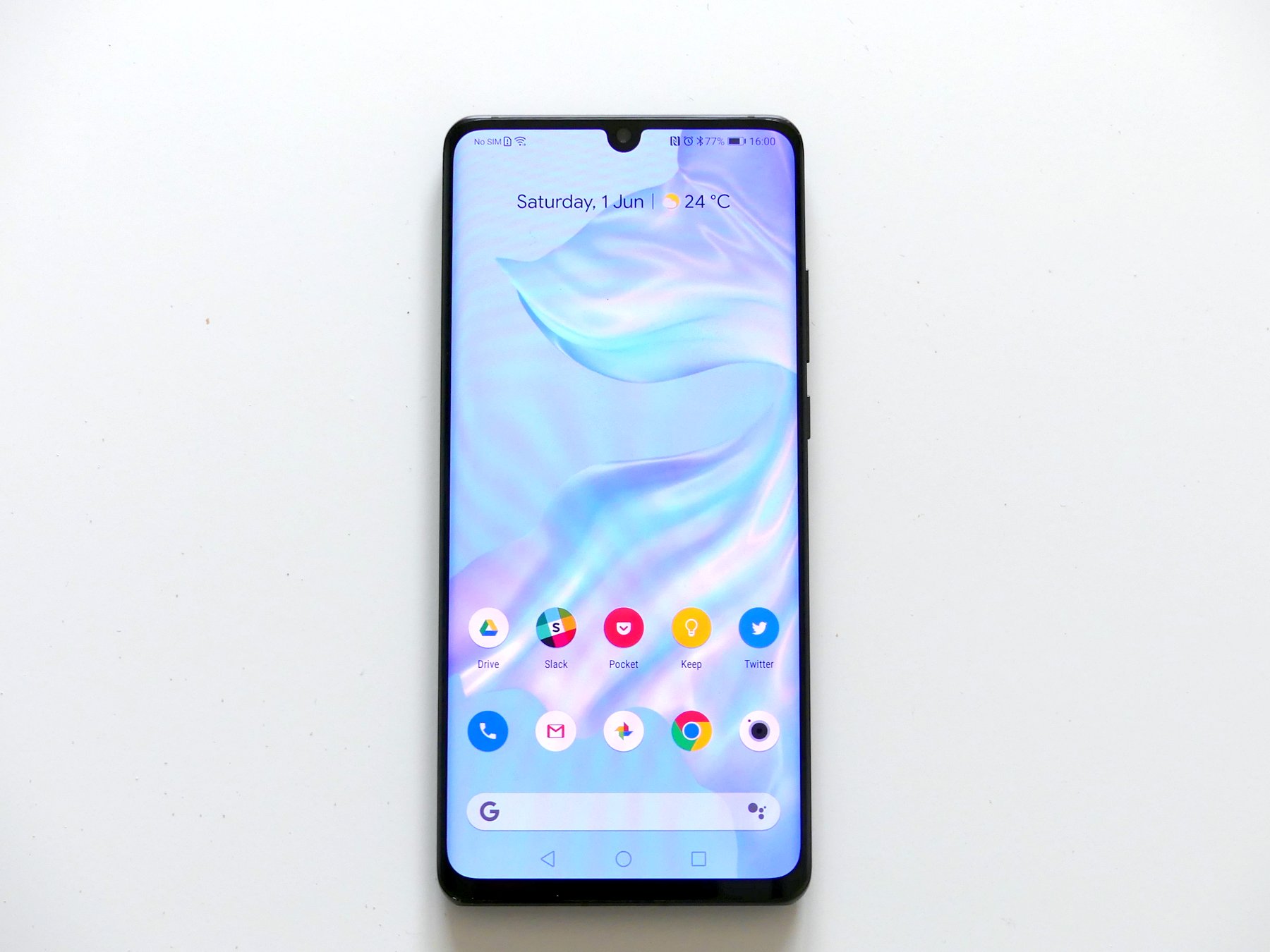 With a 6.47-inch display, the P30 Pro has an impressive 88.6% screen-to-body ratio with extremely slim bezels and a subtle chin at the bottom of the device. It’s not quite as impressive as the full-screen display on the OnePlus 7 Pro but then there are no mechanical moving parts to have to deal with. While the display is certainly sufficient, the OLED display provides a 1080 x 2340 resolution, which is a step down when compared with the likes of the S10+. It provides sufficient performance and quality with 398 pixels-per-inch but for those who care about the low-level specs of the display, the P30 Pro cannot compete with the flagship competition. The P30 Pro out of the box comes preset to a zoom level that made the images and text on the device appear massive, which personally I found uncomfortable. It meant that only 5 or 6 emails would appear on the screen at once in the Gmail app. Some may prefer this zoomed in look but I found it a waste of the big screen. Thankfully, Huawei allows you to configure this and reduce the text size and screen zoom but the default setting seems more aggressive than other OEM’s.

The P30 Pro is powered by Huawei’s in-house HiSilicon Kirin 980 using the 7nm manufacturing process and paired with either 6 or 8GB of RAM depending on storage configuration, which comes in 128, 256, or 512 GB options. Throughout our use of the P30 Pro, it handled everything we threw at it without hesitation. The experience was not limited by the hardware but rather Huawei’s aggressive memory management that would close background apps in favor of preserving battery life.

The 4200mAh battery, while not the largest on paper, in practice, is an absolute powerhouse. The P30 Pro could easily achieve 2 days of light-medium use and even heavy use would allow me to reach the evening with 40% left. This is in no small part due to the power management employed by Huawei’s software that sacrifices background flexibility to extend battery life. This preservation is intrusive but completely customizable and could be a trade-off that most are willing to make to get this kind of battery performance.

On the topic of battery, despite only really needing to charge every other day, the P30 Pro has 40W fast-charging for quickly topping up the battery when you’re in a hurry and also features 15W wireless fast-charging. The P30 Pro also features reverse wireless charging, which while a novelty and not really practical for charging any significant battery, such as a smartphone, can be helpful to top-up accessories like Bluetooth headphones.

Huawei has continued its fingerprint implementation of positioning the sensor under the display. The optical sensor is equally as unreliable as other implementations but much more accurate than the ultrasonic sensor on the S10+. 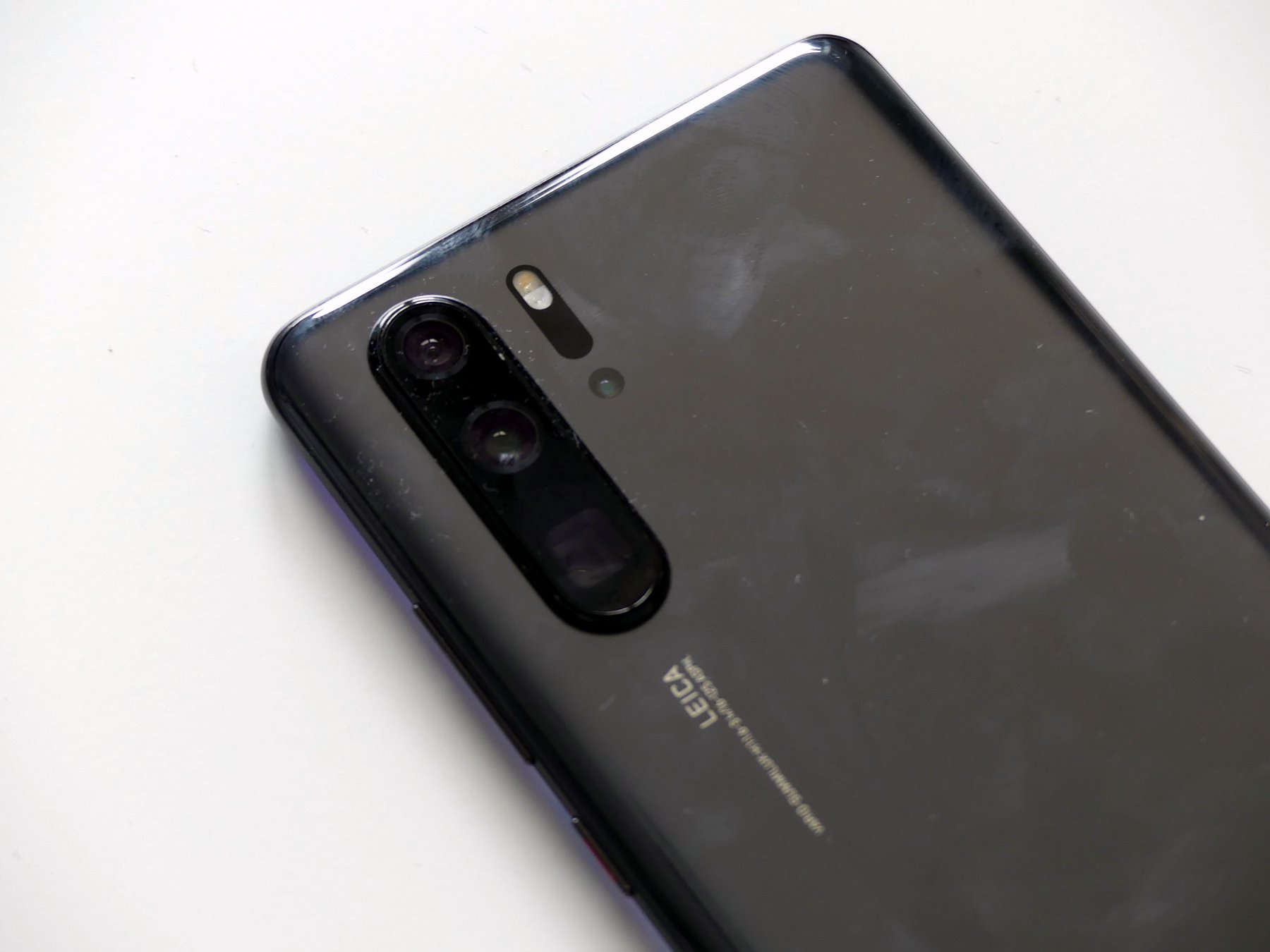 The Huawei P30 Pro is an impressive device with a spec sheet to support a modern flagship even without considering the camera. However, when the DxOMark-topping optics of the Huawei P30 Pro are brought into the mix, the smartphone is elevated to one of the best of 2019.

The P30 Pro comes equipped with a 40-megapixel f/1.6 27mm wide-angle lens with OIS, a 20-megapixel f/2.2 16mm ultra-wide lens, and the pièce de résistance – an 8-megapixel f/3.4 125mm lens capable of 5x optical zoom and up to 50x digital zoom. All of this is paired with a 3D ToF sensor, dual LED flash, and phase-detection autofocus.

The camera app is packed with Huawei’s AI features, which are capable of automatically detecting scenes to optimize the settings for things like food, animals, HDR, and others. This enables even photographic amateurs to capture amazing shots by not having to fiddle with a ton of camera settings. The app itself is well organized, which allows users to easily switch between the wide-angle modes, as well as engaging the 5x and 10x zoom modes.

Overall, there are very few complaints about the images produced by the P30 Pro. Eagle-eyed viewers would notice that the Huawei image processing often made the images look a bit washed out. Detail, on the other hand, thanks to its excellent sensor capabilities are preserved even at 10x zoom thanks to the AI processing and RYYB sensor. Things become a little unstable as you progress through to the maximum 50x and at that highest zoom setting, the images are relatively unusable without a tripod, and even then don’t expect to preserve much detail. Even so, the capabilities of what the camera on the P30 Pro can do completely change the landscape for smartphone photography across the board. 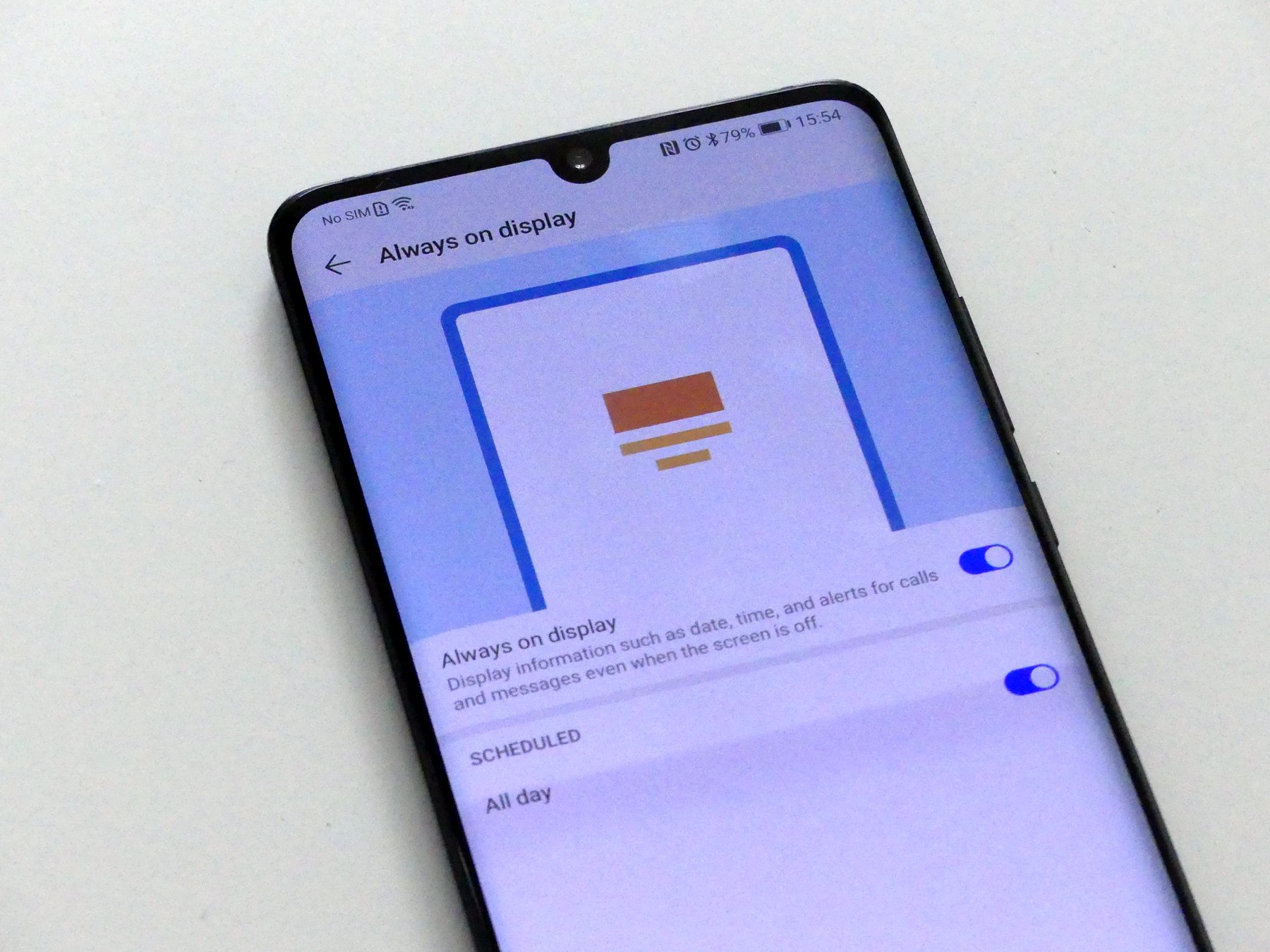 EMUI has progressed significantly over the years and version 9.1, which is based on Android 9.0, is packed full of features but is a stark departure from a stock Android experience. Many will find the software a steep learning curve with Huawei skinning elements throughout, while others will enjoy the larger fonts, lack of app drawer, and rearranged menus.

Historically, the software has been a stumbling block that would detract from the excellent hardware, but EMUI has evolved and can be managed to no longer make it a deal-breaker. Of course, the elephant in the room means the software on the Huawei P30 Pro is at risk and will cease to function as we know it given recent developments. We’ll keep things short and simple in this section since this landscape is set to drastically change in the coming months.

If camera performance is important to you then the Huawei P30 Pro is a no-brainer. The versatility of the hardware means that the camera is capable of performing and yielding impressive results throughout a number of different scenarios and the AI software doesn’t get in the way, instead, helping the user avoid the need to adjust settings for the optimal shot.

EMUI is a tough learning curve, but its nothing a third-party launcher cannot fix and you soon begin to learn the system. The Huawei P30 Pro takes everything that was good about the Mate 20 Pro and bolts an amazing camera on. Make no mistake, the main talking point about this device is the camera. It does that brilliantly while doing everything else just ok. The battery performance is a strong positive of the P30 Pro but this is at the cost of multitasking and memory management.

The P30 Pro is a well-rounded device that I would have recommended to anyone looking for a flagship device, but the recent sanctions placed on Huawei mean that future and current devices are left in a state of limbo. We will have to see how this plays out and what it means for the wider ecosystem before confidently recommending a Huawei device going forward.

An excellent device that takes what was good about the Mate 20 Pro and bolts a game-changing camera on the rear. There are still areas of improvement that could make the P30 Pro even better, but will all be overshadowed by the recent developments with Huawei’s relationship with Google and Android.