Hidey Hole – an app for all the Galaxy S10 wallpapers

There have been mixed reactions to the hole-punch camera on the Galaxy S10 and S10+, which house the front-facing camera and avoid the need for a notch. While the presence of a permanent hole in the display presents its own challenges when consuming media, it has also spawned some creativity in the wallpaper department.

What started off as a fun take on the hole-punch, aligning with certain elements in the wallpaper to make it look like a natural placement, has evolved into its own sub-Reddit and now has its own dedicated app. The aptly named Hidey Hole is an app created by a familiar name in the development world – Chainfire, whose name you will recognize if you’ve ever researched rooting your Android device.

Hidey Hole provides an aggregation point for all the S10, S10+, and S10e wallpapers that have been cleverly created to sync up with the hole-punch. The app also provides some controls over the regular native wallpaper selection process to adjust things like contrast, blackpoint, and saturation. Probably the most impressive feature is that Hidey Hole offers a realignment feature to scale the selected wallpaper to whatever S10 variant you have.

The hole thing with these devices intrigues me as well. So I wanted to know if I could determine in code where they were, and auto-realign/scale images made for one model to another. While the cameras are close to each-other, they don’t overlap exactly, and this discrepancy shows when using an image made for one device on another (out of sync hole). Works pretty well on S10/S10E, leaves something to be desired on the S10+. The algorithm is generic so support for more devices should be easy to add. (This idea is really what led me to build this, might as well release it now I’ve satisfied my curiosity).

As an example of the above, the height of the cutout on the S10+ is a little bit less than that of the S10. When using an S10+ image on the S10, you still get a curve of missing pixels below the cutout. This realign/scale feature slightly zooms and offsets the image, so the holes align.

Stuff like this is the reason I love Android. You can grab Hidey Hole from the Google Play Store here for free, and it comes without in-app purchases or ads. 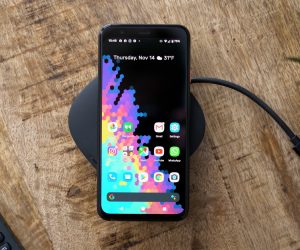 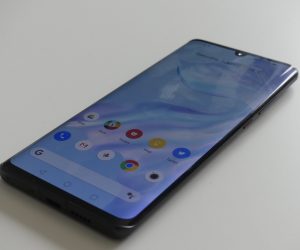