Q*Bert, the little armless orange blob and star of one of the most successful arcade games of all time, returns to Android in the newly revamped Q*Bert: Rebooted. Now available to download on SHIELD Android TV, the game allows players to revisit and relish in the series’ reaction-testing puzzle platforming in both the classic arcade experience and a new mode with sharp high-definition visuals.

Return of a Retro Hit

Updating much-loved classics is always a risky venture but retro gamers have nothing to fear from Q*Bert: Rebooted as it features two distinct gameplay modes. The first, Q*Bert Classic, is a Pixel-for-pixel recreation of the original arcade game complete with chunky pixelated isometric graphics and artwork from the iconic coin-op cabinet. What you also get is the challenging gameplay, which is just as unforgiving and satisfying as you remember it.

In the game, the eponymous hero Q*Bert is tasked with leaping around a level made up of cubes in order to change their color. When all of the cubes have been repainted, he moves onto the next level. In the early stages, one bounce on a cube is sufficient to complete the task but later it takes multiple bounces to get the cube to its target color.

The problem is you’re up against a number of enemies who are out to stop you. You’ll meet familiar adversaries such as Coily, who follows you around the level until he either catches you or you trick him into falling off. Ugg and Wrongway defy gravity by jumping around on the vertical faces of the level’s cubes. Then there are Slick and Sam who move around the level reverting cubes to their previous color and undoing all the good work you’ve done.

As you progress in the game, the level design gets more complex, enemies appear in greater numbers and the game gets faster. It’s highly demanding old-school gaming that fans will get nostalgic about, too. 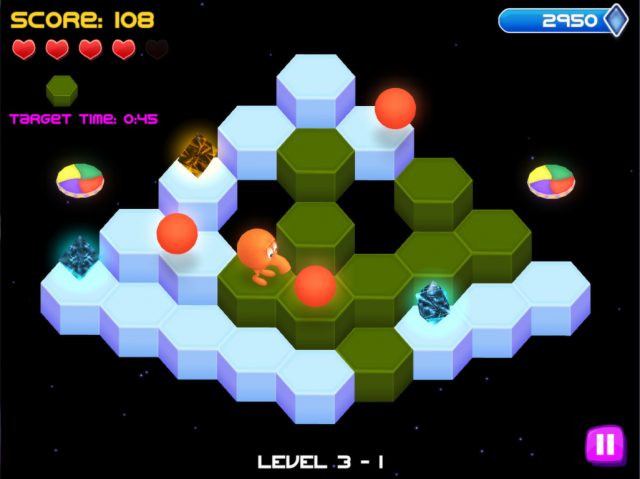 Fortunately, the Rebooted Mode doesn’t stray too far from the winning formula of the original but enhances it just enough and in all the right places to make it a fresh and fun experience.

First, and most obviously, the visuals have been polished to a contemporary HD shine with detailed textures, personality-packed characters and animated backdrops. The structure of the levels has also been altered. In place of the cube-shaped platforms of the original, we now have hexagonal platforms. This adds freedom of movement in more directions, which makes this more forgiving than the original set-up. By more forgiving, what we mean is it gives you a little more breathing space to cope with the additional challenges that the reboot throws at you.

All the old bad guys make an appearance but now we have three new enemies in the form of Homer, Uppercut and Treasure Chest. To give you a flavor of what to expect, Uppercut, for example, is a huge boxing glove that punches you off the level to your doom if you get too close.

There are also several new playable characters such as Zom*Bert, Franken*Bert’s Monster, DraQ*La and Q*Bot, which add a variety of themed fun to the proceedings. 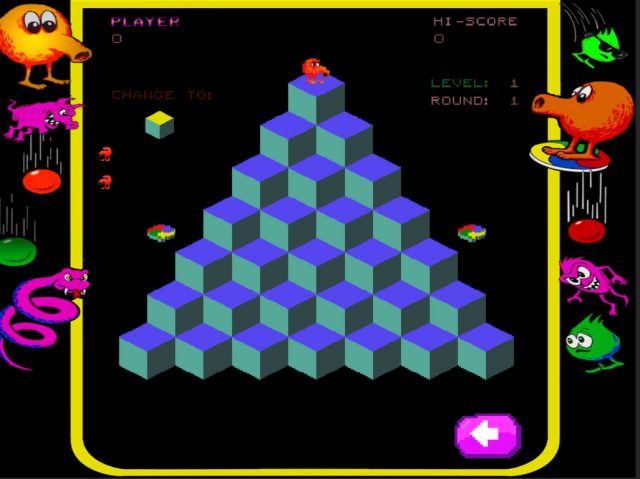 There’s a whole slew of achievements to be unlocked, among them the intriguingly named Qbertorama, Snake Surprise, Disc Rider and Coin-op Collector giving you the opportunity to dip back into any level at any time to improve your performance and collect everything on offer.