According to report, Motorola’s fastest to push updates while Sony phones crash the least

When it comes to helping you decide which phone to purchase, there are many different variables that we take into account. Much of it depends on the reputation of a device manufacturer and how well devices from the past year performed according to reviews and hands-on experiences. However, much of this is still left up to interpretation and being able to see which manufacturers take care of their customers would be a huge help.

The folks at Apteligent did just this and provided everyone with a few interesting tidbits heading into the fall season of new devices and announcements, leading up to the holiday buying frenzy. The report takes a look at reliability of devices as well as how fast various manufacturers seed updates to its users.

One of the biggest issues for non-Nexus users is how fast their devices receive updates. We’re nearing the official release of Android 7.0 Nougat which has spurred the question of when your new device will finally receive the latest version of Android. There are many different variables that get factored into this question, as pretty much all manufacturers include some type of skin overlay on top of Android to bring a unique experience. 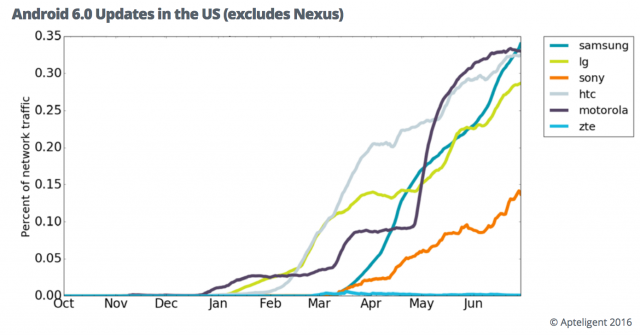 The aforementioned report polled the top 6 manufacturers in the US, while excluding Nexus devices, and measured how quickly devices were updated from Android Lollipop to Android Marshmallow. The report shows that manufacturers were clumped into two different groups: “those that pushed the update three months after release and those that wait longer – a little over five months.”

Samsung and Sony waited quite awhile before pushing the update to their devices, with ZTE following suit afterwards. ZTE’s market share is not as large as other companies but does have a reputation of being extremely unreliable with updates, as its Axon lineup just started receiving the update in February of this year. Samsung and Sony waited about 5 months before releasing the update, but there are also many different devices to push the update to, for those respective companies. This can lead to delays and bug issues that arise.

As for the reliability side of things, the report states that Sony devices were the most reliable when it comes to the number of app crashes. The testing took into account apps that are loaded more than 500,000 times per day and the number of device types. Sony took the top spot with 35 different device types and an average crash rate of 0.08%. ZTE came in 5th with 18 different devices and an average crash rate of 0.28%.

When looking at the likes of Samsung and LG, these two manufacturers are largely responsible for the “fragmentation” issue that has been plaguing Android as a whole. However, when looking at the number of app crashes, it’s pretty impressive that the crash rate isn’t larger.

These numbers are only a part of the story, but when looking at them it’s fairly interesting when it comes to trying to make a decision on which device to purchase. As expected, if you’re looking for the most reliable experience, your best bet would be to go with a Nexus device. But these aren’t as widely advertised as Samsung or LG, and aren’t readily available on all carriers all at once.

Maybe we are in for a “treat” when the 2016 Nexus devices finally hit the market, as there have already been rumors and reports which state that Verizon will be jumping on board this year. However, that leads to more questions than it solves, especially when you look at Big Red’s past history with Nexus devices and software updates. 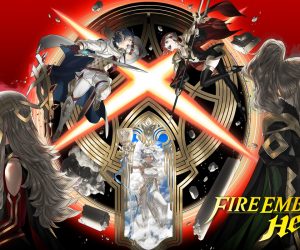 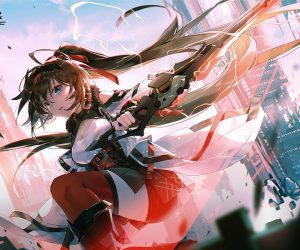