PSA: Verizon wont activate the Nexus 7 LTE on their network until it has been “certified”

With the Nexus 7 (2013) LTE finally hitting the Google Play Store last week, many excited buyers assumed that, because it was listed as such, the device would work without a hitch on Verizon Wireless’ 4G LTE network. Sure enough, it does. Pop in an already activated Verizon LTE SIM, and the world of the internet is at your fingertips. There’s just one small problem. When it comes to activating the device specifically on Verizon… they ain’t having it.

This “development” made its way across the blogs after one unhappy Nexus 7 (2013) LTE user — who couldn’t get Verizon to activate the tab — began chatting it up with Verizon Support on Twitter. According to @VZWSupport, “not all LTE tablets are created equal.” Verizon Support went onto say that unfortunately, the Nexus 7 LTE “can not be activated” referring said user to Verizon’s product listings page online. You know, officially supported devices. 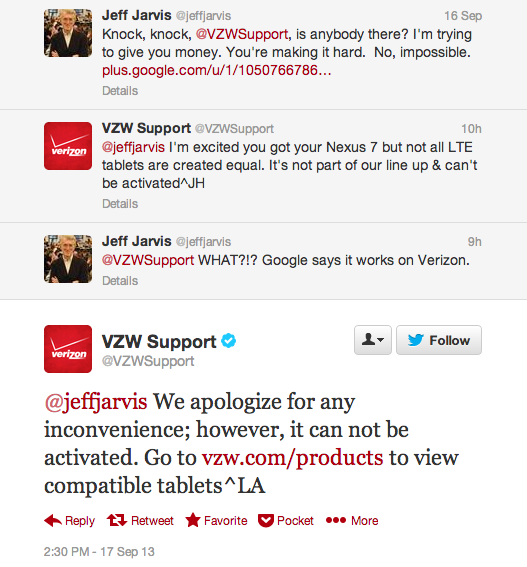 Again, just because Verizon refuses to activate the Nexus 7, that’s not to say the device wont work on their network. You just have to get creative. According to some reports, a few users have had success simply taking a SIM card from an iPad and popping it into their Nexus 7. Easy peasy. While it’s easy to get upset over the issue, keep in mind that the tablet doesn’t fully support Verizon’s network, only their LTE bands and not their 3G ones.

A more serious concern with Verizon’s refusal to allow users access to their 4G LTE network stems from a deal they made with the FCC back in 2008. According to the agreement, Verizon promised to grant any device “open access” to their 700MHz spectrum. Google was quick to point this out in a letter sent to FCC saying:

“The Commission must ensure that Verizon understands that this license obligation means what it says: Any Apps, Any Devices.”

Verizon issued an email response to Android Central, simply stating that the Nexus 7 is “not yet 4G LTE certified,” and that they’ll be updating everyone once it finally is. In the meantime, any new Nexus 7 LTE buyers experiencing any resistance when trying to activate your devices on Verizon?