After a lukewarm reception and subpar sales for the HTC One M9, HTC seems ready to make some drastic changes. They’ve already done so by cutting their workforce and swearing to focus on high-end devices in the future, and they’re even looking to go with a new name to revitalize their brand. 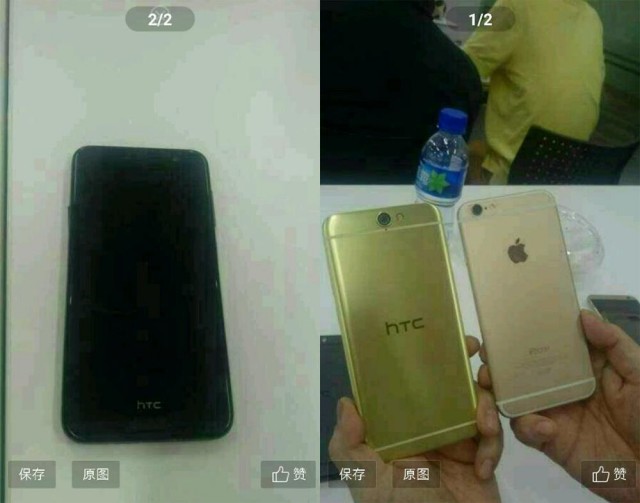 And now we might have word about another move. A new photo of an upcoming HTC phone — dubbed the HTC Aero — has turned up, and it gives us a taste of HTC’s plans for premium smartphone machinery. To be clear, this phone isn’t meant to be the company’s main flagship, but it could be a taste of what’s to come. It wouldn’t be unlike Samsung trying out their new metal-based builds in the mid-range Galaxy A lineup before bringing the goods to their flagship Galaxy S and Galaxy Note phones.

Oh, and it looks like a freaking iPhone. Well, to be fair, HTC has been doing the dual off-color strip thing since the original HTC One, but you have to admit that the less profound camera and the overall curvature and shape of the phone remind you of the iPhone 6.

Unfortunately the front photo of the device isn’t clear enough to come to many conclusions. We’d imagine HTC would want to continue placing their speakers on the front, but it’s just as possible those are now on the bottom. We can also see there might be some sort of physical home button beneath that HTC logo, something which would no doubt double as a fingerprint scanner if it came to pass.

It’s important that you don’t overreact to this leak, though. It’s possible HTC could change their mind and go with something completely different for their flagship series, and it’s possible this HTC Aero would never even see the light of day. It’s also possible this could be completely fake (even though JPEG degradation analysis is hardly the most reliable when it comes to proving these things).

Either way, don’t be surprised if they play it safe and go with tried and true designs for their next big smartphone, because they really can’t afford to mess it up.