Apple has announced a pair of iPad updates today, refreshing both models from last year with the iPad Air 2 and iPad mini 3. The two devices don’t change much in terms of design from the previous models, but a few key upgrades promise to once again make Apple’s tablet offerings the talk of the town.

Before we get swept up in another round of Apple hype, let’s breakdown how these slates really stack up against the best Android has to offer. We compare the iPad Air 2 and iPad mini head-to-head with the newly announced Nexus 9 by HTC and Samsung’s Galaxy Tab S line. 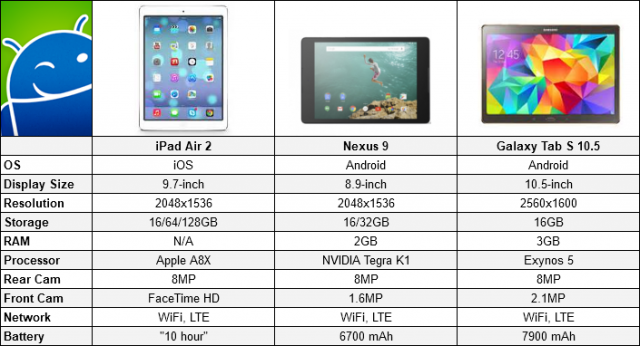 Apple’s iPad Air 2 picks up where last year’s model left off, packing plenty of punch the lightest and thinnest tablet (437g, 6.1mm) we have ever seen. Samsung’s Galaxy Tab S, which launched earlier this year, gets close at 6.6mm (467g). The Nexus 9 is the odd man out with a thickness of 7.9mm, a measurement that is still nothing to scoff out. The N9 is the lightest of the tablets at 425g.

With tablets seeing plenty of use as media devices, the display is without doubt one of the most important hardware elements to consider. The iPad Air, Galaxy Tab S, and Nexus 9 are all in the ballpark of 10 inches and all feature resolutions in excess of 1080p Full HD.

Between the Nexus 9, iPad Air 2, and Galaxy Tab S, there is plenty of processing power to go around. Each device is supported by a SoC from a different manufacturer, and each has its own advantages.

Apple’s latest offering features the 64 bit A8X. The A8X is a iPad-tailored version of the A8 processor that debuted in the iPhone 6 and iPhone 6 Plus last month, a dual-core chip that has been tested to reveal clock speeds around 1.4GHz (Apple does not reveal detailed figures for its processors). The chip also includes an M8 coprocessor for handling motion sensor inputs and promises improved graphical capabilities.

The Nexus 9 relies on the NVIDIA Tegra K1 chip, a quad-core chipset clocked at 2.3GHz. This chip also includes a Kepler DX1, which comes with the claim of offering desktop-grade graphics on a mobile device. The Nexus 9’s processor suite is supported by 2GB of RAM.

The Galaxy Tab S comes in two flavors. Some regions have access to the tablet with an Exynos 5420 octa-core processing, but most will see the Qualcomm Snapdragon 800 variant. That device sports quad-core 2.3GHz processing and Adreno 330 graphics and 3GB RAM.

The latest generation of iPads are the first to feature Apple’s Touch ID technology, allowing users to unlock their devices with a fingerprint and provide additional security for supported apps and services. The Galaxy Tab S offers a fingerprint scanner with similar capabilities, though it has been known to be slightly more finicky than its Apple competitor. The Nexus 9 does not include a finger scanner.

All devices feature rear and front facing cameras. The iPad Air 2 sports a 8MP rear camera and 1.2MP front-facing camera, while the Nexus 9 and Galaxy Tab S both feature an 8MP rear shooter and 1.6MP and 2.1MP front-facing sensor, respectively. All are capable of capturing 1080p HD video in addition to hi-res still photos.

While two of our devices run Android and only one runs iOS, all three offer different software experiences. Chalk this up to the inclusion of Samsung’s TouchWiz interface on the Galaxy Tab S (based on Android 4.4 KitKat) and the debut of Android 5.0 Lollipop on the Nexus 9. The new lineup of iPads sports iOS 8, Apple’s latest update to their mobile platform.

The differences between the Galaxy Tab and Nexus 9 are mostly surface level — core Android features like widgets, multitasking, and access to the Google Play Store remain the same. The N9 does benefit from new features introduced in Android 5.0 including its Material Design interface (a new design language geared at unifying the Android experience across devices) as well as improved notification controls and a new battery saver mode.

iOS 8’s differences are a bit more drastic. Users still have access to features like multitasking and over a million apps via Apple’s App Store, but widgets are refined to the notification shade and other core differences exist in how iOS functions versus Android. Apple made a point of emphasizing continuity features that allow users to easily move from smartphone to tablet to Mac, enabling text message and voice calling support across devices paired with a connected iPhone.

Android Lollipop boasts some continuity features, but Google has focused on media. Users can start a movie or video on one device and pick right up on another, including televisions thanks to the new Nexus Player. 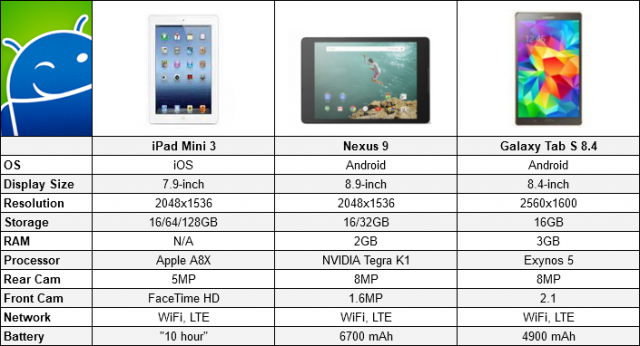 Apple also unveiled a new edition of their iPad mini, a device featuring an 8-inch display. This tablet perhaps best compares with the Samsung’s smaller Galaxy Tab S, the 8.4-inch edition, but the Nexus 9’s 8.9-inch form factor is still an option for those looking for a slightly smaller slate.

The iPad mini 3 features a 7.9-inch Retina display at 2048×1536 resolution and 326ppi. The Galaxy Tab S 8.4’s Super AMOLED display measures 8.4 inches with a pixel dentist of 359ppi. Specs for the iPad mini and Galaxy Tab S 8.4 are otherwise identical to their larger counterparts.

The Nexus 9 will go up for pre-order on October 17th with official availability beginning November 3rd. The new iPads will also be available for pre-order starting October 17th and ships next week. The Samsung Galaxy Tab S is currently available from a variety of retailers and carrier partners.