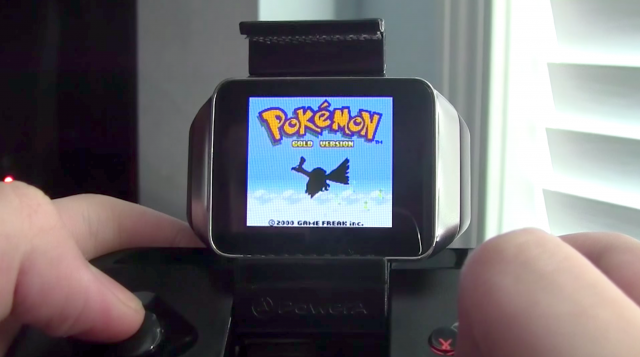 We’ll be the first to admit, we initially scoffed at developers’ attempts at bring video games to the Android Wear platform. Whether it flappy bird clone Flopsy Droid, or the puzzler Tales of Pocoro, we felt like developers were missing the point at what Android Wear was, and what it was supposed to be about. But maybe we were wrong?

After seeing Windows 95 ported to Android Wear last week, it’s clear the developers would continue to push Android Wear’s limits. That’s why it shouldn’t come as much of a surprise to find that same crazy developer, Corbin Davenport, back again in a new video, this time showing off a Game Boy Color emulator ported to the handheld OS complete with functional Bluetooth controller.

What is surprising is how well the whole thing runs, likely a testament of the Snapdragon 400 powering the whole thing. Have to admit, we’d love to see how the Moto 360 would stack up, not so much in performance but in the battery life department where the TI OMAP seems to struggle (also, the circular display would be challenging).

As shown in the video, after installing the MOGA app and VBC emulator on the Samsung Gear Live (running Android 4.4W), everything works just as it would on your smartphone, with the smartwatch nestled snugly inside the MOGA’s clamp. If you want to experiment for yourself, you only need a little knowledge in the ways of ADB and can follow Corbin’s directions in his blog post here.

Of course, the question of how practical this could be in the real world remains. Those of you who’ve been around the gaming scene for awhile may remember Nintendo’s Game Boy Micro, a Game Boy Advanced with a tiny 2-inch display you could clip on your keychain. Android Wear devices really aren’t much smaller, and if you don’t mind carrying around a MOGA controller in your pocket, you could have everything you need for some quick gaming sessions.