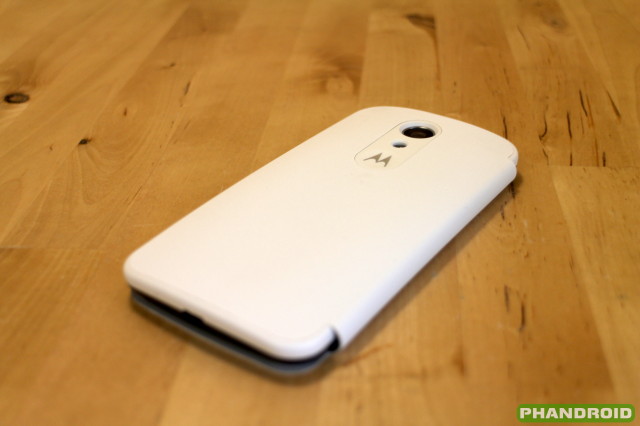 Those looking to add a personal touch to their Moto G without sacrificing protection need look no further than the Motorola Flip Shell case. A direct replacement for the Moto G’s back cover (available in a variety of colors) with the added benefit of a folio-style screen protector, the Flip Shell  would seem to be an easy choice. But does it deliver? 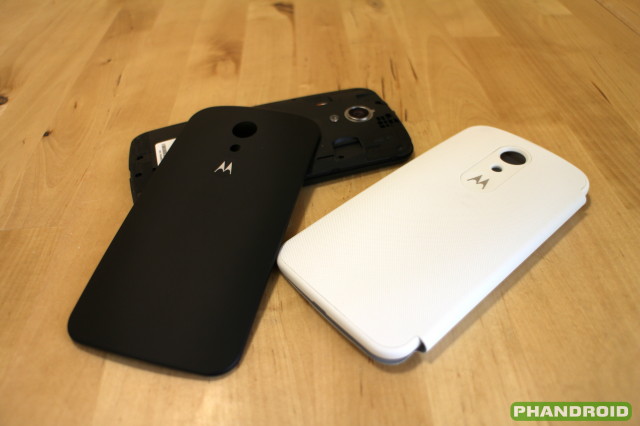 Motorola Shells are the Moto G’s equivalent to the Moto Maker options available for its pricier sibling, the Moto X. The Shells don’t offer quite the level of customization we see with the Moto X, but they do offer one distinct advantage: they are user replaceable. So, while options overall are more limited, users are not stuck with one look for the duration of their handset’s life. Simply decouple the back you don’t want and snap a new one in place. You could even rotate daily to match your outfit.

While the standard Motorola Shell merely replaces the Moto G’s back cover, the Flip Shell is a slightly different beast. It’s Motorola’s take on the folio-style cover that has become more and more popular in recent years — a case that wraps around to include a front flap for added screen protection. It perhaps started with Apple’s iPad Smart Cover and caught on in the Android world with Samsung’s S View case for the Galaxy line. Other manufacturers have followed suit, bringing us the Quick Circle case by LG as well as the Dot View case by HTC.

The Motorola Flip Shell shares the same form, but doesn’t provide the same extended functionality as these cases. The aforementioned smartphone cases all in one way or another offer a windowed view that at a minimum allows users to quickly peek at notifications and other info without lifting the front folio flap. Some even enable shortcut capabilities to quickly respond to said notifications or dismiss them. The Motorola Flip Shell for the Moto G does none of these things, but that’s not to say it serves no purpose or lacks at least some basic bells and whistles.

Beyond simply adding a degree of protection for the Moto G’s display, it also interacts with the handset on the software side. Opening the folio cover will fire up the display. Your phone is ready to view when you are. It’s a little touch that takes the flip cover from cumbersome to quite useful.

Those thinking about going with the Motorola Flip Shell should know one thing: it adds a decent amount of bulk to the phone. The back is similar in proportion to the standard rear cover, while the padded front folio adds to the device’s overall thickness. Same goes for the pliable hinge that connects the front and back portion of the Flip Shell. As a bonus, however, the Flip Shell does offer a textured back that adds some grippiness.

It is our opinion that the Moto G doesn’t look quite as nice in its Flip Shell digs. It loses some of its sleekness and the beauty of its subtle curves are obscured. We’re sure not everyone will agree on that point, and it wouldn’t be the first time a smartphone buyer decided to sacrifice looks for protection (look at you, Otterbox users).

A magnet system is in place that in theory should keep the Flip Shell from flying open, but we haven’t had much luck getting it to hold. The link between the magnets is fairly weak and makes this almost a non-feature. 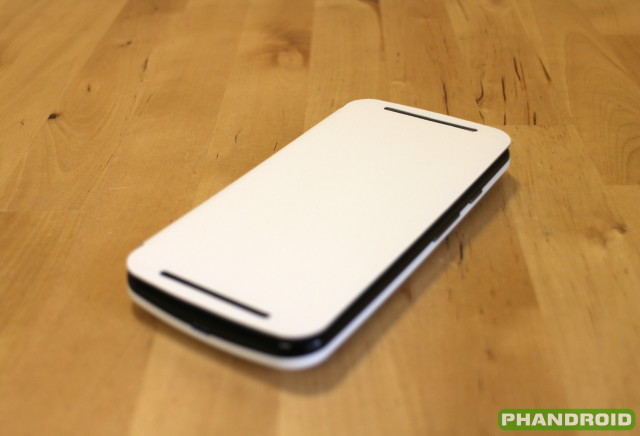 At $30, the Motorola Flip Shell is twice the price of standard Motorola Shells. Perhaps this is justified — it offers twice the protection. Still, the sum seems a bit inflated considering the limited added functionality the case provides. For those looking to keep their screens scratch-free or wanting to go for a more mature look for their Moto G, the Flip Shell is a fine option. It won’t be for everybody, however.