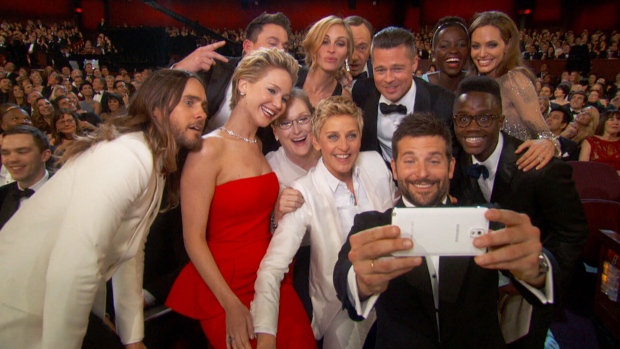 In case you missed it, last night was the 86th annual Academy Awards hosted by everyone’s favorite daytime talk show star, Ellen DeGeneres. You may remember our post from last night where — as many of you noticed — Ellen was live tweeting from the event using a large, pleathery Samsung Galaxy Note 3.

Like anyone paid to endorse a product, this didn’t mean the Note 3 was her daily driver, made apparent by the fact that while backstage, Ellen was back to tweeting from her trusty iPhone.

The fact that the Note 3 made an appearance for the event didn’t really strike us as odd given Samsung was a paid sponsor of the Oscars — even airing the first two Samsung Galaxy S5 commercials during the show. While we may not ever actually see the official bill ABC left with Samsung, you may find it interesting to know that the Korean manufacturer is actually denying paying for the epic selfie moment during the live show.

According to Samsung, they didn’t actually pay Ellen anything to show off the phablet or take the much publicized mid-show “selfie” using the device. Samsung’s official statement? The entire thing was completely “organic.”

Of course, we should note that Samsung did say that because they were so pleased with Ellen being a Note 3 fan, they were now donating $3 million to Ellen’s favorite charities. So, while the talk show host didn’t directly benefit from using the device during the awards, money was paid out.

We saw a lot of great actors take home the Oscar last night, but if there was an award for “Best PR speak from and Android OEM” — perhaps it should have went to Samsung? There’s always next year…

According to “sources familiar with the matter,” The Wall Street Journal is now reporting that Samsung and their media buying firm did make an agreement with ABC to incorporate the device into the Academy Awards itself — not just during the commercial breaks.

The deal is said to have cost Samsung upwards of $20 million dollars and at one point involved a short documentary of budding young film makers all equipped with Samsung devices (although the clip never aired). In regard to Ellen’s epic Oscar selfie, apparently Samsung execs met with her backstage to help get her better acquainted with the phablet and it’s photo taking capabilities.

After that, the world’s most star-studded selfie took place, with a Samsung phone also sharing in the spotlight. Sounds like money well spent, which is puzzling given Samsung’s public denial.