As we inch closer and closer to the consumer release of Google Glass, the smart glasses have caught a lot of attention from those who concern themselves with legal issues. Particularly, Glass is being seen as a possible danger to road safety, with many folks considering the contraption too distracting to concentrate on driving.

We’ve already gotten through the first major legal hurdle, with Explorer and digital masochist Cecelia Abadie challenging a ticket that says she was driving while using an illegal monitor (said monitor being Google Glass).

That San Diego trial proved to be a half-win for the Glass-toting masses, though we were quickly reminded that the battle is far from over. While the judge ruled that it was allowable for her to wear the unit in the car, he ruled that she would be unable to use it in any way, shape or form while the vehicle is moving.

But now it looks like Glass is about to jump right from the frying pan and into the pits of a very hot volcano. Wyoming Senator Floyd Esquibel (D) crafted and presented a bill that would ban the use of the device while behind the wheel of a vehicle. His main weapon in the fight? The notion that “common sense” should prevail:

“Common sense would tell you that you really don’t need to look at a little computer while driving, that it endangers you, your passengers and other drivers.”

Funny, that, considering cars come with “little computers” in them by default, such as advanced in-dash units which provide access to music, apps, and information. Let’s not forget the GPS devices and smartphones which are docked to folks’ windows on a daily basis, Mr. Senator.

The issue with Google Glass is that it’s fixated more close to your face than those other devices. Still, many contend that the device is out of the way and doesn’t obstruct your vision as long as your eyes are facing forward as they normally would. You would need to deliberately look up at the monitor in order for it to affect your normal vision.

Wyoming is joined by Delaware, Illinois, Missouri, New Jersey, New York and West Virginia, according to the National Conference of State Legislatures. The goal is to make sure safeguards are in place before this technology seeds into the public and goes mainstream. 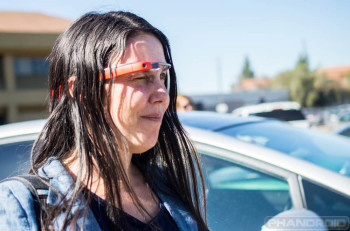 The biggest challenge Google faces with all of this is proper education and getting these lawmakers to see that Glass doesn’t do anything to affect driving performance. Google knows this uphill battle is out of their hands, though, and all they can do is warn folks to pay extra attention and care when driving with Glass, and urge them to follow their local road safety laws.

We’re not of the opinion that it’s wrong for these lawmakers to have concerns about Glass, but they should take a second look at the technology for themselves before passing judgment. Let’s hope they’re willing to at least listen to those who feel they’re wrong, and take the public’s thoughts into consideration before moving too fast on any solid legislature.

How can you help? You can start by writing your local congressman and letting them know that you want Glass to be treated fairly throughout inevitable talks to have it banned on the road.