Driving with Google Glass ruled legal by California judge, you just can’t use it [UPDATE: VIDEO]

A judge in the State of California has dismissed a citation for California woman ticketed for driving while wearing Google Glass. This story is developing and will be updated with details as they emerge.

We were live at the court where Cecilia Abadie came out victorious against the state of California! She held a press conference right after she “walked free” and we got it all on video for you! Check out the video to see what her opinions on the matter are.

In October of 2013, Cecilia Abadie became the first person to receive a traffic ticket for driving while wearing Google Glass. Initially pulled over for speeding, the California Highway Patrol Officer issuing the ticket tacked on an additional charge for “Driving with Monitor visible to Driver (Google Glass)“, sparking a worldwide debate on the safety and legality of driving while using and/or wearing Google Glass. In this case, the distinction between the two is important.

The officer relentlessly questioned Abadie on her reason for driving with Glass and insisted that it blocked her view and created a distraction. But did it?

Abadie (represented by San Diego Traffic Attorney William Concidine) argued that her Google Glass was not in use at the time of the speeding offense and she was therefore not in violation of any law, a claim that seems almost impossible to refute given the circumstances.

The judge sided with Abadie, noting there wasn’t enough evidence to prove the Glass display was active while she was driving.

According to Commissioner John Blair of the San Diego County Superior Court who heard the case, wearing Google Glass while driving is perfectly legal in California, supposing it’s turned off and/or not in use as in this case.

Would it have been legal for Cecilia to use Glass in any way, shape, or form while driving? How much further can you push the envelope – beyond wearing them while turned off – before you’re breaking the law? To answer that question, we’ll probably need someone else to “break the law”, forcing further decisions to be made. For now, it was made clear that Abadie would have been found guilty if she was actively using and interacting with the illuminated display on Google Glass. 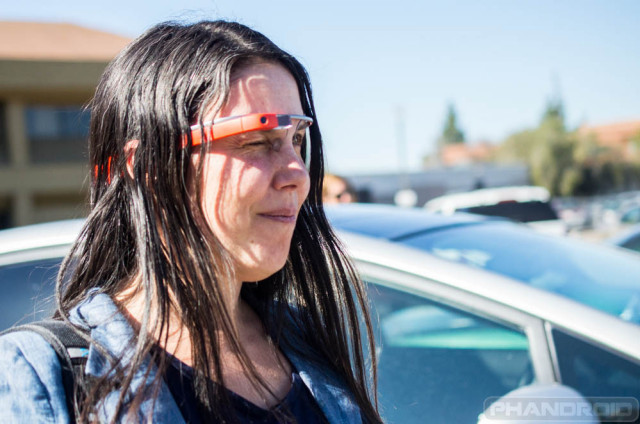 Keep in mind Google built Glass with features like turn-by-turn driving directions that make it very obvious in-vehicle use were and are intended. (Update: Though official statements by Google warn users to obey local laws and act safely/responsibly, Google never outright suggests driving directions be used by drivers and it’s possible this feature is intended for use by passengers.)

Wondering what it’s like to drive around while wearing Google Glass? If you’re wearing but not actively using Glass, you’ll see nothing. On the other hand, here’s an example of using Google Maps with Glass.

The above simulated example of driving with Google Glass is part of our full Google Glass Review. From turned off to heavy use, Google Glass use while driving may or may not violate the California law in question depending on how it’s interpreted. And in the court of law interpretations mean everything, potentially setting precedent that sets the long-term dividing line between right and wrong.

Ms. Abadie’s situation falls to one extreme – she was wearing Glass but it wasn’t in use – but the spectrum of possible use cases is wide open. New technology, posing new questions, with new gray areas.

Where should we draw the line?

I haven’t heard anyone lobbying to legalize watching videos on YouTube while operating a vehicle and wearing Google Glass- obviously lines should exist. People can choose to break laws and cross lines (ex: texting while driving), but does that mean we should categorically ban using the technology even when done in a responsible manner that respects safety and promotes innovation?

The line Abadie allegedly crossed is listed on the ticket (and California DMV website) as “V C Section 27602 Television“. Gray area galore: is Google Glass simply a “display” with “entertainment” capabilities that violates this article or is it exempt due to “article b” categorizing it as a mapping display or supplemental enhancement? Or does it qualify as both, and if so, on what side of the law does that land Google Glass?

Right now we simply know that the State of California will allow you to drive while wearing Google Glass, provided the display is turned off. But given the outrageous complexity of automotive controls and entertainment these days and the equally distracting lack such technology (read below), it’s hard to imagine a world where Google Glass is considered a distraction compared to the alternatives.

Consider that while Cecilia Abade was initially issued a ticket for breaking the law, at the same exact time you could have walked into a car dealership, bought a brand new car with nearly identical technology built-into the windshield, and legally driven it through any state in the USA. Have fun in your brand new Camaro ZL1:

Nevertheless, lawmakers in several US states including Delaware, West Virginia, and Maryland have made serious efforts to ban Google Glass. Meanwhile, check out the chops on the brand new Tesla Model S, complete with a internet connected 17-inch touchscreen on the middle console that is sure to have every driver laser focused on the road like an Aderall-popping college student during final exams. 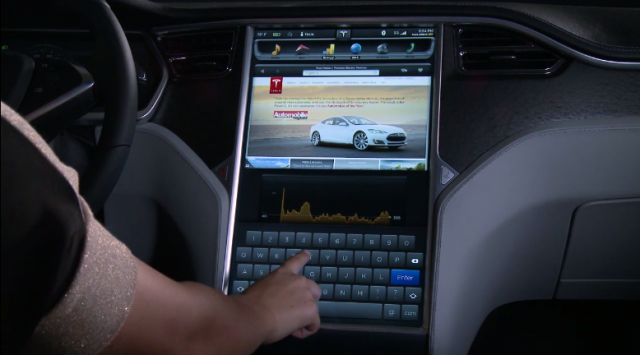 For comparisons sake, here is the semi-transparent display you can optionally  see when looking through Google Glass:

If head mounted displays are considered a safety concern, printing directions from Mapquest should be illegal and anyone using paper maps should be issued life sentences. Have you ever seen someone following scribbled down directions or trying to reroute to avoid traffic with a paper map? It’s madness… and the inconsistency of lawmakers is laughable.

You can put this day in the record books but make no mistake: this is just the very beginning of a long and winding road that will play out across decades, not days.

It wasn’t long after Google Glass launched (read our full Google Glass Review) that public sentiment became sharply divided. On the one side people were irritated, dismissive, concerned about privacy, and outraged that such a stupid looking and pointless technology would be introduced and embraced.

Just as using your smartphone in social settings and public places can stick out like an inappropriately sore thumb, so can using Google Glass. But while Smartphones are status quo, many perceive Google Glass as the rarest of nerd geekery (or is it geek nerdery?), and the social acceptability of using Google Glass at all was soon brought into question.

It suddenly became cool to diss Google Glass, officially entering mainstream humiliation mode after appearing as the topic of a Saturday Night Live skit and a Daily Show segment.

Mashable put out a hilarious video depicting the worst of this social behavior in a video about “Glassholes” and unfortunately the name stuck.

Before long the uninformed masses were jumping on the ignorant mud flinging bandwagon. The technology was just born but would it even get a chance?

It’s no coincidence that the first wave of Google Glass users, trying out a product still in beta, have been dubbed “Explorers”: they’re entering uncharted territory.

As a Google Glass Explorer myself I’ve consistently received feedback from strangers who can’t help but ask what I’m wearing. Some are breathtakingly excited to see them for the first time, “Oh my God is that Google Glass?!”

Some very curious, “What’s that on your face?”

Some have even been downright rude, making a point of approaching me to explain why I look stupid or how I’m contributing to the invasion of privacy and end of human civilization. But if you’re patient enough to explain it to people – both those who are optimistic and positive and those who are rude and negative, you almost always hear the same response when you let them give Glass a try: “Wow, that’s awesome!”

Whether smartglasses become mainstream remains to be seen, but innovation and fear are enemies. Google Glass will iterate, evolve, and be exciting to follow regardless of success or failure. But before you knock it, give it a try.

While those urging to ban Google Glass in the car claim a ban would be good for safety, there are others leveraging the exact same technology to save lives. Take for example DriveSafe, a recent App developed for Google Glass that alerts the driver with audio tones and physical vibrations if they’re dozing off while at the wheel. 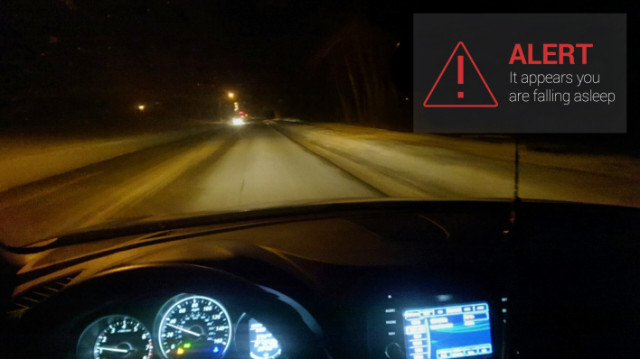 Some scary and disturbing facts from recent polls by the National Sleep Foundation and Center for Disease Control:

How many millions aren’t around to explain that falling asleep at the wheel is the reason they died in a car accident?

Google Glass can be irresponsibly used and increase the risk of an accident, but it can also be used to save lives among other things. We’re much better off when technology is embraced and monitored rather than feared and outlawed. At least that’s my belief.

You’d better get used to it because with the announcement of the Open Automotive Alliance, we will be seeing Google Glass, Android, and a whole lot of unknown future technological awesomeness coming to cars in the next few years. If you’re absolutely adamant that driving while using Google Glass is distracting and should be illegal, don’t worry… it won’t be long before cars are driving themselves.

Scratch that… they already exist. 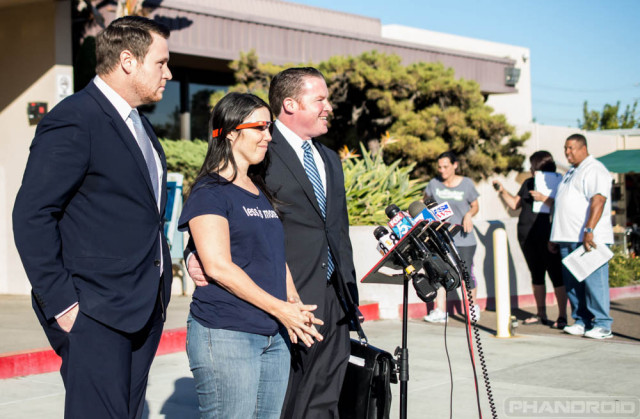 UPDATE #2: it’s official… Abedie publishes the “not guilty” proof on her Google+ profile.

UPDATE #3: exclusive video coverage of the courtroom aftermath posted at the top of this article!