How has battery life on the Nexus 5 been for you? [FORUM TALK] 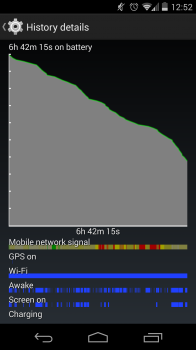 Early reviews of the Nexus 5 revealed some really weird battery claims. Many folks say battery life is great one day, but poor the next. Others say it’s been just as fine as it’s been on the Nexus 5, if not better. Whatever the case may be, reports are all over the place and we’re wondering how things have been faring for those of you who were able to get a Nexus 5 unit by now.

My personal unit hasn’t been through a full charging cycle yet, but I’ve had no qualms with battery life. I received my Nexus 5 at around 89% battery this past Monday, and that drained down to about 14% after  6 hours of somewhat heavy usage — it’s the first day, folks, and I need my apps. Today has been a bit more mild for me, though I have yet to go through a full charge and discharge cycle so I can’t get an accurate beeline just yet.

Chris Chavez reports similar up-and-down performance, with his first day being a bit dreadful, but the second day faring a lot better. The Nexus 5’s 2,300 mAh stands to give him about 12 hours on his current charge, though he tells me that’s from really, really light usage (and about 1.25 hours of screen-on time).

Our developer, Steve, also decided to chime in, though you should note his statistics are a bit skewed. His latest cycle was interrupted by a decent period of charging, so the 22 hours you see in his screenshot (below) probably isn’t the best representative of true battery life.

So, right now, we’re just confused. We’ll be keeping an eye on battery life over the next few days for our full review, but we want to get an early idea of how things are going for the rest of you. Be sure to chime in with your own findings in the comments section below, and don’t be afraid to extend the discussion to this big battery life thread over at AndroidForums.com. Let’s see if we can’t work together to find out just how good (or bad) battery life on this thing truly is. 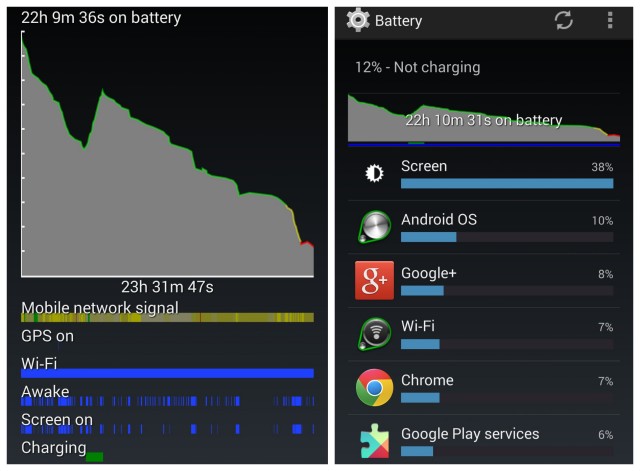