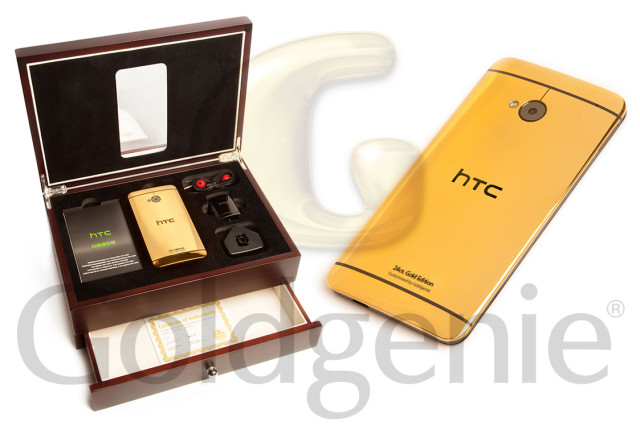 Here we go again, folks. A company decides to slap some gold and diamonds onto a smartphone and ask you to pay a ridiculous price for it. This time, HTC’s pride and joy for 2013 — the HTC One — has found itself dipped in delicious gold plating, giving users a luxurious smartphone experience.. but not without cost. Goldgenie is the benefactor, and they’re asking you to cough up £1895 to walk away with one (£1995 and £2095 for Rose Gold and Platinum, respectively).

That price is definitely outrageous, but what if I told you that’s actually on the cheap side for what you’re getting here? Most phones of this sort tend to be priced disgustingly high, with some companies asking you to pay tens of thousands of dollars for similar treatment. We suppose that comes with the “this smartphone is only for the wealthy” territory.

That said, we’re not sure of the quality of work that has been put into plating the HTC One with gold. The smartphone comes in a nice wooden box and is packaged with a certificate of authenticity — you know, just in case dropping 3 months’ worth of rent on the smartphone didn’t quite feel authentic enough.

Goldgenie is a rather interesting company, though — they’ll take on orders to customize any phone with their gold, rose gold or platinum plating. You simply drop them a line with your smartphone and which service you want, and they”ll get back to you with a quote and further instructions for getting the job underway.

I’m not one who would need such luxuries in my life — I wouldn’t even want to touch my smartphone if I paid that much for it — but if you’re feeling the need to upgrade your mobile status symbol this might be a nice route to take. Take a look at the gold-plated HTC One above and below. You can head to Goldgenie’s site if you’re actually in for one of these. 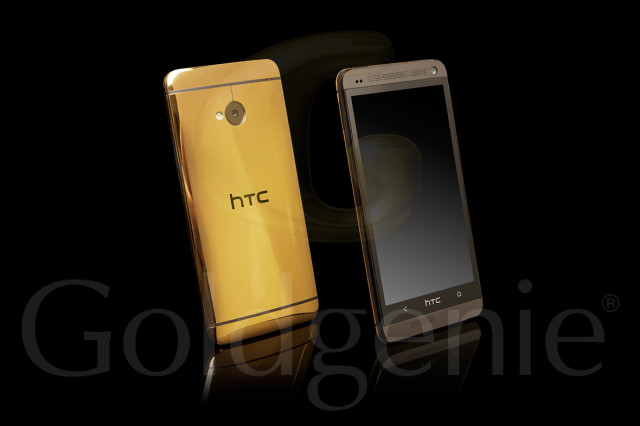