Facebook takes “most used app” crown from Google Maps in 2012, 2013’s story sure to be different

The folks at ComScore did some number crunching to find out which mobile apps were the most popular throughout 2012. The results only include data from iOS and Android, but considering these two combined have a vast majority of the world’s mobile market share we’d say the sample size is good enough.

Believe it or not, Google Maps was the most used application for a vast majority of the year, commanding a significant lead over Facebook until June 2012 when the race became neck and neck. The trend might have continued all the way throughout the year, but guess what happened at the tail end of the calendar? Yep, Apple Maps, and the temporary death of Google Maps. 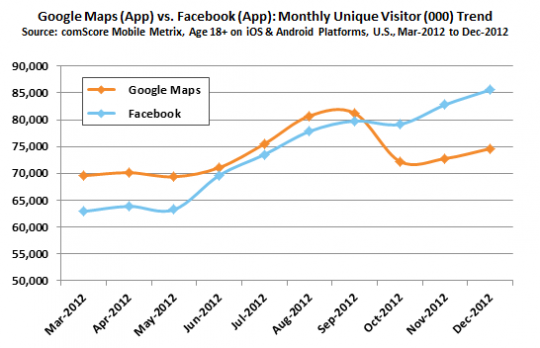 Without Apple’s play, Google Maps might have come out with the top spot for 2012, but the lack of Google Maps on iOS caused a huge dip. Let’s not take anything away from Facebook — it closed the year out with a very nice climb of its own, but we’d like to think that has something to do with new smartphone owners being added to the pool following the smartphone-heavy holiday season.

Google’s still sitting quite nicely, though, as spots 2-6 belong to its own applications, including Google Play, Youtube, Gmail, Google Search and the aforementioned Maps. With its own Maps app back on iOS we imagine Google will be able to contend with Facebook in the 2013 race, though with Apple Maps taking a large chunk of its thunder it’s going to be a tight one.

What does all this mean? Nothing at all, really. Facebook and Google Maps provide two very different services, so the battle really isn’t between the two. If anything, this just goes to show how big of an influence Apple’s decisions have on the general landscape of mobile. Check the chart below for the full list of 2012’s top 10 apps. 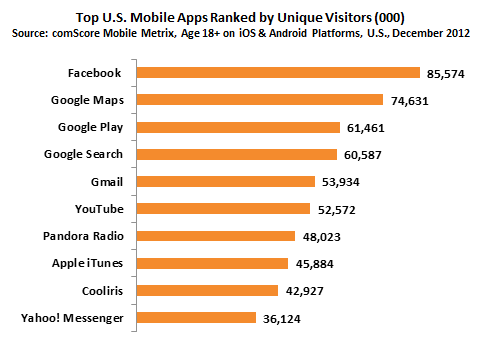 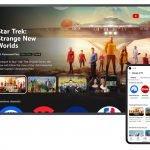