I’m pretty sure that openly criticizing your soon-to-be-employers isn’t a good idea, but sadly I’ve been so frustrated with my Galaxy Tab 10.1 during the last two month or so that I just had to rant about it. In fact I first wrote this piece about a month ago, chose not to post it once some of the frustration subsided, but the latest OTA I received pushed me over the edge.

I don’t want to talk about the need for custom UIs, that is a debate that has gone on forever. Some people like them, some don’t, and to give them credit they have added some useful functionality in the early years of Android. But custom skins come at a great cost, to the users, to the developers and to the platform in general. Unfortunately, with what we’ve seen with the ICS version of TouchWiz, we can forget about these companies listen to us.

But we really have to draw a line when the manufacturer’s meddling leaves us with buggy software, stuff that shouldn’t have been pushed out to users in the first place. TouchWiz for the Galaxy Tab 10.1 was flawed right from the start, something I pointed out during my technical interview with them. They said they’ll look into it, but six months later they haven’t made one change, and I’m not holding my breath.

Firstly the minor things. The grey navigation bar at the bottom? Surely you would think the company that creates the most beautiful mobile device screens would know the burn in it can cause to AMOLED pixels. What was so wrong with the default Android black anyway? If anything that was more gorgeous. Update: I mistook the tablet to have an AMOLED display. It has a TFT LCD screen, which does not suffer from screen-burn in, but can suffer from image persistance which is a temporary flaw, but can become permanent. Since I spend a lot of time reading my college books, this is a major issue for me and I have personally encountered image persistance on one occasion. Fortunately, it got resolved on its own.

Does the screenshot button really have to be ever present? I must have taken well over 50 of them in six months of usage, but only thrice did I actually intend to. And with the drawer for the mini-apps right there, you have the perfect solution. 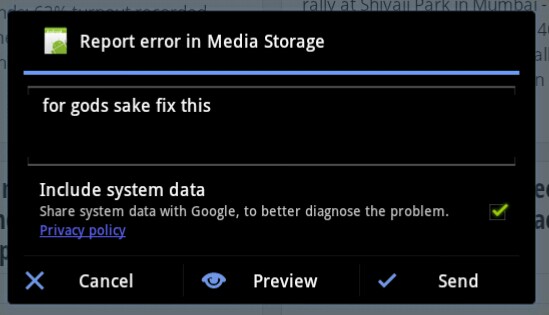 And don’t even get me started on the bugs. They just seem to be adding up with every update. Ever since i installed the “HTJ85B.UEKMM 7510UEKMM” build, I’m receiving force close options for android.process.media at an hourly rate, some times faster. When I sent one error report, I thought to myself “I should have gotten a screenshot of this for an article”. Disappointed at having missed out on the opportunity, I continued reading Google Currents. Five minutes later, again the crash. And I got the image above.

Also, if I don’t reboot the tab every couple of days, it gets laggy to the point of being unusable. I can’t even use a live wallpaper just because it seems to slow down the entire tablet. When I finally got an OTA notice for the build number “HTJ85B.UEKMP P7510UEKMP”, I felt that they’d finally sort out those issues. Unbelievably, they managed to find a way to make things worse.

For some very strange reason, I now have the phone version of Android Market on my tablet. Where I can’t even see the home screen. No discovering apps for me, I must search for something I want and get it on my own. How on earth did they manage to muck this up?

And please, oh please, get some better interface designers. Your current team is really mucking up Matias Duarte’s work (do they even know who he is?). For the Indian development team, get rid of that NID-only hiring principle you have. NID is a prestigious college, the best in India for design, but the primary focus is fashion and graphics, not UI/UX. I’ve seen some fabulous interface designers who might not have formal training (because all of them studied Computer Science), but they know technology, they actually use these gadgets, and those are the type of people you should be looking to hire.