The Future of NFC Looks Great; If Only Widespread Adoption Were Accelerated [MWC 2012]

I visited NXP at Mobile World Congress. I’m a huge fan of NFC and was excited to hear that they’d have new demos to show off at the show. They used NFC in a lot of great ways. The most obvious demo was the digital ad poster which would take users to relevant sites when tapped. Tapping a movie poster, for instance, takes you to a trailer, or tapping a clothing store’s poster will get you deals and send you straight to their site.

Those basic applications have been tried and true, but the other three were really fascinating. First up, they demoed a restaurant waiting system where, instead of waiting for a waiter/waitress to come to you, you can summon them with the tap of your phone. More than just alerting them that you need service, you can even tell them exactly what you want so they will already have your order or check by the time they get back to your table.

Another use-case is at a hotel. Instead of getting a hotel room key (usually a card that goes into a door) you could use your phone to unlock your hotel door. You could check in to your hotel on your phone and completely bypass the counter. Of course, they have a demo where you can just use an NFC-enabled card, but the phone is so much cooler. Unfortunately they didn’t have a working demo of it at the booth but they assured us that the technology works.

A biggie at the booth was a literal biggie – they had a motorcycle on hand that would allow you to start your motorcycle with your phone or with a card. Because NFC is smart, they’ll deny ignition if an unauthorized NFC device is present. More than that, you can check the status of your motorcycle from afar. If someone tries to tamper with your bike, you’ll know. And if you’re running low on electricity (it isn’t a gas-powered bike) you’ll know that, too.

Finally, the parking meter demo – it wasn’t as awe-inspiring as the others because I have long thought that this would be a great use for NFC. The best part about all of this is that these aren’t just tech demos – these products are really coming to retailers, hotels, restaurants, bikes and the like. As the title states, though, it’s unfortunate that NFC is still a very small deal in many parts of the world. There’s no telling when we’ll see this sort of stuff literally everywhere but we can only hope that it’s sometime within the decade. Check out all our demos above. 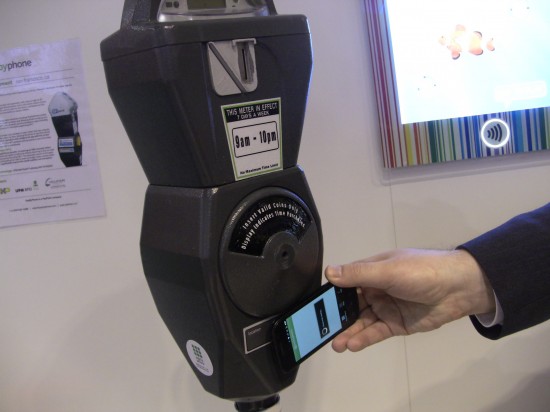