The folks at Tucows, who were once known for their applications (free, shareware or otherwise) repository for desktop operating systems are looking to introduce a new venture that’s interesting, to say the least. With the help of Sprint they have launched Ting, a pay-as-you-go service that gives users extremely good value compared to other PAYG carriers. 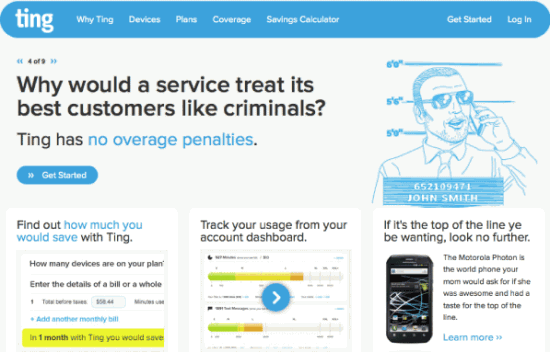 One of the great things about Ting is how flexible it is. You don’t have to have text, data, or voice if you won’t want it. Some might just want data and text messaging, while others might just want voice and nothing else. Ting lets you do any combination of the three main services that you wish. That is reason enough to switch for a ton of people.

Ting has ridiculously low prices when it comes to voice and text. For $3 you could get 100 minutes of talk time if you don’t use voice much. $9 would get you $500, saving you $3 if you extrapolate from the cheapest plan. Similarly with text messages, you can get 100 of those for $3, 1000 for $5 and so on and so forth.

Data is a bit different, though. You can get anywhere from 100MB of data ($3) to 3GB ($60). Naturally it’s more expensive than text and voice but Tucows allows you to step onto Sprint’s 4G WiMax network with any capable 4G phone of theirs.

Without the extra $10 data charge and without needing to pay separately to use your device as a mobile broadband plan it does still come out to be a decent value. Take a look at their rate plans above.

The most interesting thing is their overage feature. If you go over any of your allotted minutes, texts or data you’ll simply be stepped up to the next tier on whichever feature you go over on. If you don’t use all of the allotted features for that tier you’ll be reimbursed for those unused featured. If you happen to be stepped up to XXL and go over, you’ll be charged normal overage rates as seen above.

Here’s a list of the Android devices you’ll be able to get (all prices are without contract as this is a PAYG carrier):

If any of this sounds interesting to you and you want to try out a new carrier, head to Ting’s site. It’s not clear whether or not your existing Sprint devices will be able to be activated for Ting but we imagine you won’t be able to without some hackery on your part. Wherever Sprint’s network extends is wherever Ting extends so you won’t have to worry about a lack of coverage (for 3G and voice, anyway). [Engadget]