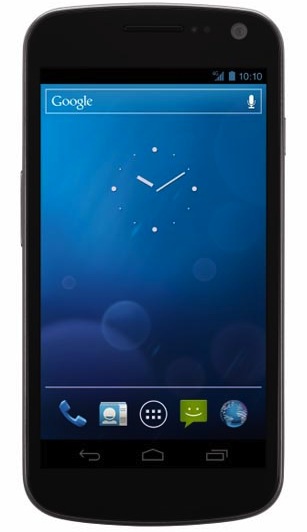 If our Happy Holidroid contest didn’t fare too well for you and you were still looking for a shot to win a free Galaxy Nexus, you may wanna listen up. Starting tomorrow (10AM ET), for the next 4 days, Verizon Wireless will be throwing a Twitter contest giving away a free Galaxy Nexus each day.

If you want to get a head start — first, make sure you are following @VerizonWireless on Twitter — and for the next 4 days, the rest of the contest rules can be found below. 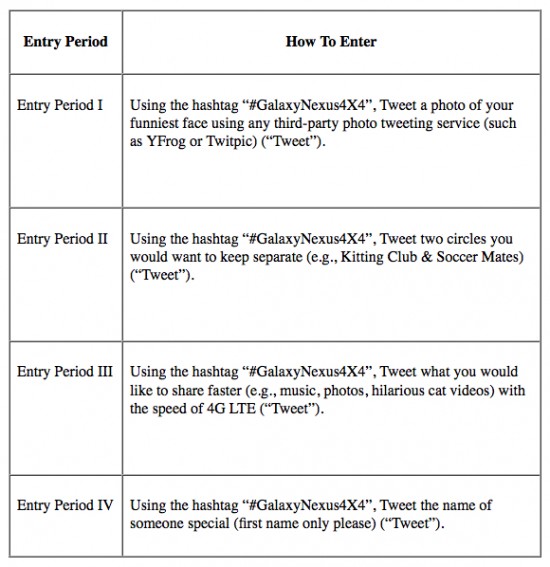 For the rest of the eligibility requirements, I’ve gone ahead and provided those for you below. Best of luck, everyone!

Eligibility: Open to legal residents of the 50 United States and the District of Columbia, 18 years of age and older as of January 24, 2012, who follow @VerizonWireless on Twitter as of date of entry.

a. Users must use the hashtag #GalaxyNexus4X4 to enter the Giveaway.

Entries must be in English. For any photos submitted, you, as entrant must be the only person depicted in photo. Any Tweet or portion thereof that, in the Sponsor’s sole discretion, is obscene, profane, lewd or defamatory; contains any third party materials, or otherwise displays, violates or infringes (or may infringe) any copyright, trademark, logo, mark that identifies a brand (other than Sponsor) or other proprietary right of any person living or deceased (including but not limited to rights of privacy or publicity or portrayal in a false light) or entity; includes anti-social, political or religious groups, a commercial solicitation or address, phone number, or URL address; is otherwise objectionable; or does not meet the Tweet requirements outlined in these Official Rules will not be considered and may disqualify the Tweet. If you do not have a Twitter account, you may create one, by visiting www.Twitter.com. Creation of multiple Twitter accounts in order to enter the Giveaway will result in disqualification. In the event of a dispute as to any entry, the authorized account holder of the email address used to set up the Twitter account will be deemed to be the entrant. Potential winner may be required to show proof of being the authorized account holder of the email address/Twitter account associated with the entry. Entrants and winners acknowledge and agree that their Tweets become the property of the Sponsor, which thereby has the right to edit, adapt, modify, reproduce, promote and otherwise use Tweets/entries in any way it sees fit. Normal Internet access and usage charges imposed by your Internet service provider may apply. Entries must be received by 11:59:59 pm ET each day during the Giveaway Period based upon the time Twitter displays as the time at which it received each Tweet on each day to be included in that corresponding Entry Period’s drawing. Any user who, in Sponsor’s sole discretion, posts profanity, pornography or other objectionable content on Twitter may be removed by Sponsor from being an @VerizonWireless follower and from participating in the Giveaway.

Random Drawings: Daily Prize Winners will be selected in each of four (4) separate random drawings, one for each Entry Period, from among all eligible entries received during each daily Entry Period. Entries will not be carried forward for any subsequent drawings. Drawings will take place on or about January 31, 2012. Odds of winning will depend upon the total number of eligible entries received during each Entry Period. Drawings will be conducted by Don Jagoda Associates, Inc. an independent judging organization whose decisions will be final on all matters relating to this Giveaway.